The environmental decision to halt the fuel-transport deal with the Emirates created the first real diplomatic crisis between the countries since the signing of the Abraham Accords. 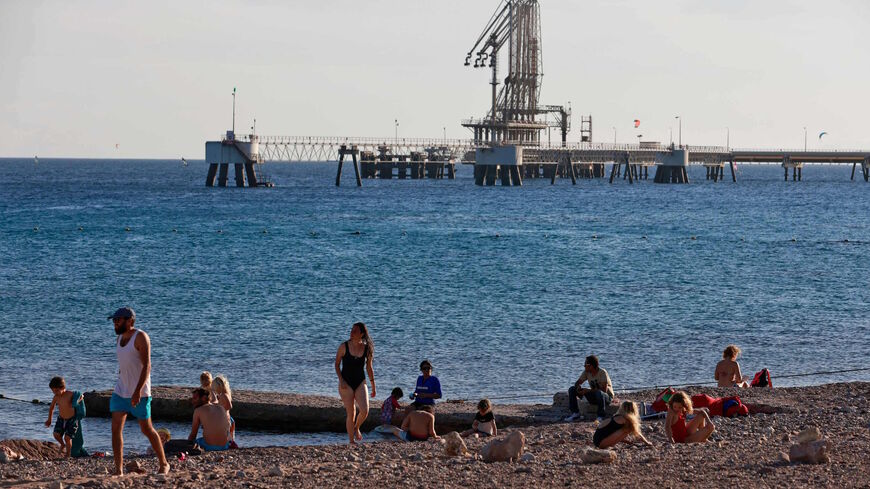 People and children gather at a Red Sea beach near the EAPC oil terminal by Israel's southern port city of Eilat on Feb. 10, 2021. - MENAHEM KAHANA/AFP via Getty Images

On July 23, Prime Minister Naftali Bennett called Emirati Crown Prince Mohammed bin Zayed to congratulate him on the occasion of the Muslim holiday of Eid al-Adha. It was the first phone call between the two men. Both sides reported that it was a good conversation, focusing on the importance of the normalization agreement between their two countries.

The Emirates also reported that the two men discussed future cooperation, the most recent developments and challenges in the Middle East, and their commitment to achieving peace and prosperity in the region. But what the official spokespeople did not report was that despite this friendly call, a significant diplomatic crisis was simmering beneath the surface, and that it has the potential to ruin the relationship between Israel and the United Arab Emirates, who signed the historic normalization agreement at the White House in September.

The reason for this crisis is that the new Israeli government has been signaling plans to reevaluate a deal to transport oil from the Persian Gulf to Europe through Israel. The agreement was formalized in March by the Europe Asia Pipeline Company (EAPC), an Israeli government owned national conveyor of crude oil, and the Emirates. Before proceeding with the agreement, Israel wants to conduct an in-depth investigation of the impact the project would have on pollution in the Gulf of Eilat. Under the original agreement, the Emiratis would be allowed to transport oil to Europe via the pipeline from Eilat to Ashkelon. But on Sunday, the new environment minister, Tamar Zandberg, ordered the agreement be put on hold until all of its environmental implications can be investigated.

The agreement, celebrated by both countries as the dawn of a new era, which would have put hundreds of millions of dollars in Israel’s coffers. Within two months of the deal's formalization, Emirati oil was already flowing through the pipeline. But not everyone was happy about that. Israeli environmentalist groups were alarmed by what they claimed could result in an environmental and ecological disaster and launched a campaign against the agreement.

They began by petitioning the Supreme Court to order Israel to repeal the agreement, citing various serious arguments that the agreement would lead to a significant increase in the amount of oil reaching Eilat, and that this could result in a devastating oil spill, which would pollute the coastal waters there. Furthermore, they argued that the agreement would intensify Israel’s involvement in the petroleum industry, despite the climate crisis. They pointed out that the terms of the agreement were secretive, and that it was signed without being brought before the government for approval and without consulting with the experts at the Ministry of the Environment, who are among those warning of the deal's potential impact.

At first, the Emirates did not place any importance on these protests. They assumed that the signing of a legally backed agreement with a government company, especially one pushed through by the Netanyahu government, ensured that it would be honored. In the past few weeks, however, they began to realize that there is a real chance the agreement will be overturned because of the change of government in Israel.

The problems began with remarks by Zandberg, a member of the Meretz party, who spoke out against the agreement as soon as she entered office in June. On her first day as minister, she said, “The Gulf of Eilat is in real danger because of the EAPC pipeline. Israel does not need to serve as a petroleum bridge to other countries.” Senior officials in the UAE turned immediately to the Israeli Foreign Ministry to clarify what the minister meant.

Zandberg is a committed environmentalist. As a member of Knesset, she worked closely with environmental groups in their campaigns against pollution in the region. Being minister of environmental affairs was her dream job. It should have surprised no one that she arrived at the ministry with fully formulated plans for action and a team that shares her passion for environmental issues. When it came to the pipeline, simply making statements about the problem was not enough for her. She began to apply pressure to other ministers to support Israel’s withdrawal from the agreement. It was starting to work.

But the EAPC responded with studies and data of its own supporting the idea that the amount of oil that would pass through Israel would not pose an environmental risk. The company then cited the agreement’s importance to Israel’s energy security.

When the state responded to the Supreme Court on July 21 in an attempt to defend the agreement, it became evident that Zandberg’s efforts had been effective. While the government did not reject the agreement out of hand, Prime Minister Naftali Bennett and Foreign Minister Yair Lapid “requested a comprehensive investigation of all the implications of the issue that lie at the heart of the case, given that the new government was only just formed. As such, it has not had time to investigate the matter in depth and independently, particularly since it is such a sensitive and complex issue.” What this means is that the government plans to investigate the agreement itself, the manner by which it was approved and whether it poses an environmental threat to Israel. All of this leaves the door open for its possible repeal.

Emirati officials were genuinely shocked by the most recent developments in the Supreme Court, and sent a flurry of worried messages to Israel seeking clarification. One senior official in the Israeli Foreign Ministry told Al-Monitor, “This is a crisis that could gain momentum. As far as the Emiratis are concerned, they signed an agreement with an official government agency. When they saw how Bennett and Lapid responded to the Supreme Court, they interpreted it to mean that the State of Israel was against them.”

Israel HaYom newspaper reported, “Abu Dhabi is warning that this could escalate into a serious diplomatic crisis. Fears that the agreement might be repealed could tarnish the relationship between the United Arab Emirates and Israel.” The article goes on to quote officials in Abu Dhabi as saying that with the inauguration of the new government, Israel sent an unequivocal message to the UAE that the Ministry of Environmental Affairs intends to step up its efforts to bring about the repeal of the agreement by enlisting the support of all the relevant ministries.”

There is no doubt that the change of government in Israel is starting to be felt in all sorts of areas. The fact that Bennett is politically weak means he can’t do everything he wants. The fact that a single party can advance its ideological worldview is evident in the pipeline crisis. It is quite possible that if he could, Bennett would back the agreement, if only because of the diplomatic consequences of its failure. Now, however, he is obligated to make his coalition partner Meretz feel comfortable in the coalition.

Reportedly, in conversations Bennett had with the Meretz parliamentary contingent, he promised his door would always be open to the group despite their ideological differences. As such, Zandberg is doing the right thing. It is also worth noting that the previous environment minister, Gila Gamaliel of the Likud party, also opposed the pipeline agreement. The problem then was that she had very little sway over the prime minister during the transition government.