With nine female ministers, the government of Prime Minister Naftali Bennett includes the highest number ever of women in an Israeli Cabinet. 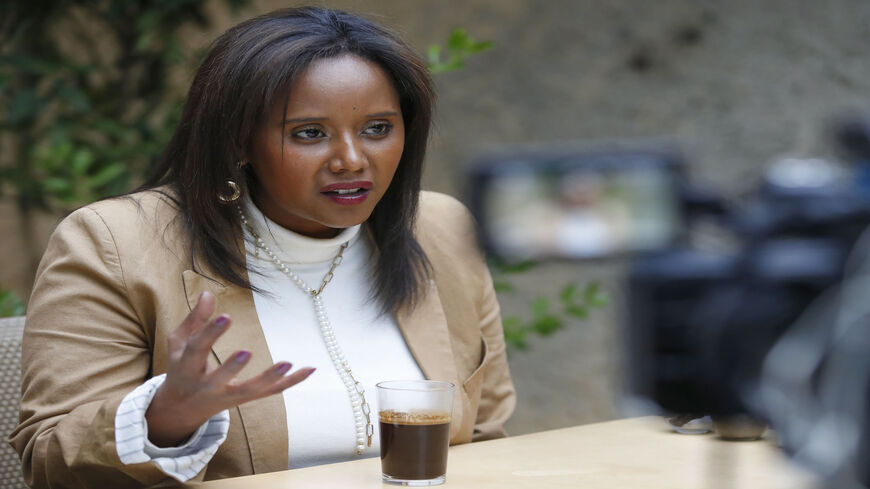 Pnina Tamano Shata, the first Israeli Jewish woman of Ethiopian origin to be elected to the Knesset, talks to AFP journalists during an interview, Hadera, Israel, Feb. 4, 2020. - Jack Guez/AFP via Getty Images

The government confronting Israel’s fourth wave of the coronavirus differs greatly from the makeup of the governments that dealt with the previous three, with a new leadership and a record number of nine female government ministers — about one-third of the total. While low in Western terms, this level of representation is Israel’s highest ever and a welcome achievement in gender terms, enhanced by the appointment of nine women as directors general of government ministries (some under male ministers).

The age of the female ministers ranges from 38 to 59. Some have served in previous governments, and all head ministries tasked with civilian rather than defense-related issues. Ayelet Shaked, 45, of Yamina is the first woman to hold the post of interior minister. Karin Elharar, 43, of the Yesh Atid party is the first woman to serve as energy minister. Elharar is also the most severely disabled person to serve in government, requiring a wheelchair due to muscular dystrophy.

Other female government members are the minister of immigrant absorption, Ethiopian-born Pnina Tamano Shata, 40, of the Blue and White party; Science and Technology Minister Orit Farkash-Hacohen, 50, also of Blue and White; Environmental Protection Minister Tamar Zandberg, 45, of the Meretz party; Education Minister Yifat Shasha-Biton, 48, of the New Hope party; Transportation Minister Merav Michaeli, 54, of Labor; and Economy Minister Orna Barbivai, 59, of the Yesh Atid party. Barbivai has already made history by being the first woman promoted to the rank of major general and then serving as the first female chair of the Knesset’s Foreign Affairs and Defense Committee. Minister of Social Equality Merav Cohen, 38, of Blue and White is the youngest among this women’s roster, but a veteran social campaigner.

The coronavirus pandemic has provided these women with a platform to demonstrate more complex thinking on managing this distinctly civilian crisis, especially regarding its effect on the school system.

The decision to place education at the forefront of handling the crisis is being led by Shasha-Biton, who holds a doctoral degree in education and who has insisted in recent weeks that the school year begin on Sept. 1 as planned, despite an uptick in COVID-19 cases. She came in for harsh criticism, within the government, too, and was accused of promoting irresponsible populist policies with potentially fatal implications. But she refused to back down. She insisted that repairing the emotional damage to children and youth wrought by being distanced for such long periods from their schools and social circles should take precedence, warning that repairing the damage inflicted so far would take a long time.

She scored a victory Sept. 1 with the opening of the school year, after leading the charge in the governmental coronavirus Cabinet. In addition to her academic qualifications, as a mother of three she brings to the table a deep understanding of the school system and children’s needs.

Shasha-Biton’s stubborn position received the backing of her government colleague Merav Cohen, a mother of three small children, one of them a baby. Cohen was the first female member of the previous government’s coronavirus Cabinet who voted against the closure of kindergartens. But she was in a minority in the male-dominated Cabinet led by former Prime Minister Benjamin Netanyahu and Defense Minister Benny Gantz.

In fact, most of the female government members are mothers of school and kindergarten-aged children. Transportation Minister and Labor Party Chair Michaeli just announced that she had become a mother for the first time at the age of 54 through a surrogacy procedure. The oldest female minister, Barbivai, has young grandchildren.

Shaked, a close ally of Prime Minister Naftali Bennett, has also taken a role at the forefront of the crisis. Shaked stirred up a storm some three weeks ago when she said in a TV interview that the government had decided to live alongside the coronavirus and contain the number of the pandemic fatalities. Shaked’s comment regarding the dead may have been an unfortunate choice, but she explained honestly that the new government has adopted a different approach to combating the pandemic, completely opposed to the previous government’s fear-mongering, lockdowns and closures. Her courage and refusal to embellish the situation earned her praise, along with criticism. She did apologize for her use of words, but did not take back the gist of her remarks.

Looking back, in the three months since assuming power, the presence of the nine women around the government table has had a distinct and clear impact on managing the coronavirus crisis, as well as on advancing gender-related, environmental and other nonmilitary issues.

Shasha-Biton succeeded where all her male predecessors failed in pushing through a decision last July to transfer responsibility for day care centers to the Education Ministry’s purview — from its outdated perch under the Ministry of Economy. The idea was not only to create a coherent continuum for children’s education from birth but also to place responsibility in the hands of education professionals rather than those of welfare, labor and economy officials who treated the day care system as a babysitter for working mothers.

The women’s significant share in government and control of civilian and environmental issues has also achieved success in terms of interministerial cooperation, as demonstrated this past July.

Four female ministers — Zandberg (environmental protection), Michaeli (transportation), Barbivai (economy) and Elharar (energy) — adopted a courageous initiative in announcing they would work together for the inclusion of Israel in the group of nations fighting the climate change crisis. Israel has adopted a low profile in this field over the years and their move is considered a breakthrough, although for now it is mostly declarative. Each of them is in charge of regulatory mechanisms and budgets that could advance Israel’s role in dealing with the climate crisis.

Zandberg, who has been closely identified with the issue as a Knesset member, has already recorded one achievement in prompting Bennett and Foreign Minister Yair Lapid to reexamine Israel’s contractual agreement with the United Arab Emirates approving the pumping of natural gas through the port of Eilat. Zandberg is seeking to revoke Israel’s agreement to the project, citing its potential for ecological disaster.

The level of women’s representation in government and in the Knesset is still far from satisfactory, and their success in penetrating the higher echelons of defense and economy portfolios comes up against a deeply ingrained obstacle. Israel has never had a female defense minister, nor has a woman ever held the position of public security or finance minister. Nonetheless, it is worth remembering that Israel was among the few countries in the world led by a woman — Golda Meir — who broke the glass ceiling over 50 years ago.