In Israel, campaign for vaccinating in schools becomes political

Against the opinion of Education Minister Yifat Shasha-Biton, the Ministry of Health decided to open vaccination sites in schools. 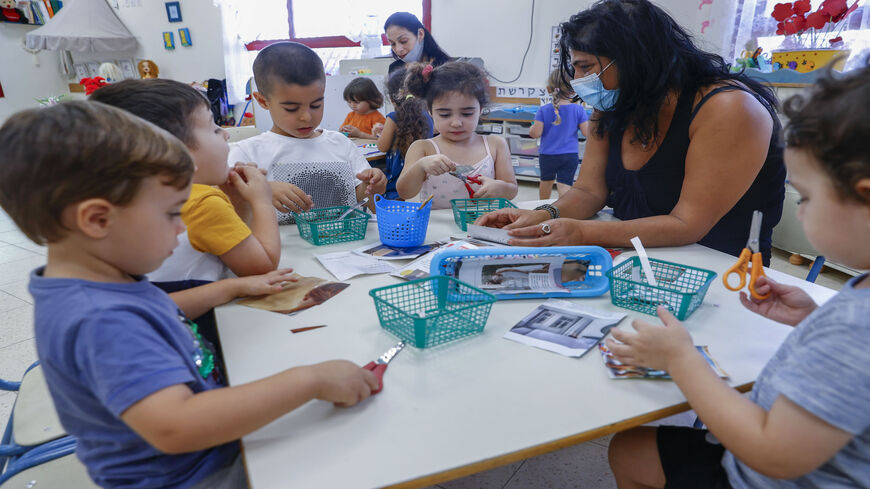 Israeli children take part in activities at a kindergarten in the central city of Shoham, Israel, Oct. 18, 2020. - Jack Guez/AFP via Getty Images

In 12 days, on Sept. 1, Israel’s schools are slated to open a second school year during the coronavirus pandemic. This time, in addition to wearing face masks and learning in small groups, middle and high school students will have access to COVID-19 inoculation sites in their schools. Children over the age of 12 will be able to get vaccinated with parental approval in schools. The government hopes large numbers of pupils will get vaccinated, allowing for a school year without any closures.

This step was authorized Aug. 19, when Health Ministry Director-General Nachman Ash signed a special directive for vaccination sites in schools. The unusual directive was needed to circumvent Education Minister Yifat Shasha-Biton who led a determined stand against inoculating children in schools, even in light of the fact that the fourth coronavirus wave is spreading all over Israel.

The Health Ministry directive came shortly after an especially tense Cabinet meeting Aug. 16. Shasha-Biton was on one side and Prime Minister Naftali Bennett, with Health Minister Nitzan Horowitz (Meretz) on the other. According to the media outlets, Bennett lost his patience, raised his voice and accused Shasha-Biton and the CEO of her ministry of interfering in the success of the school inoculation operation. He slammed them by saying, “You should be the ones to lead the vaccination bandwagon of the youths, and instead you do nothing to help!”

The minister and her CEO reiterated their stance, saying, “We have no problem with vaccinations. We are just against vaccinations during school time. We don’t think that school principals and district managers need to deal with these kinds of things.”

In the weeks leading up to that Cabinet meeting and to the subsequent directive, Shasha-Biton was subject to harsh criticism by members of Israel’s government of change over her objection to vaccinating in schools. But more so, people in Israel criticized Bennett for failing to impose his authority on her. This was also political criticism: Bennett appeared as a weak prime minister unable to cause his ministers to toe the line. According to the coalition agreements, only the chairman of Shasha-Biton’s New Hope party, Justice Minister Gideon Saar, can fire her.

Meanwhile, morbidity is on the rise. Health Ministry experts have made it clear that vaccinations in schools can greatly improve Israel’s abilities to halt the spread of the coronavirus and to maintain a regular school year. However, the minister refused to budge.

The climax came when Shasha-Biton called school vaccinations a “crime” in a July 28 TV interview with Channel 12. She was adamant and said that while she has no objection to immunizations, she is not prepared to allow them on school territory in the course of regular study days. According to Shasha-Biton, “To do it at school, that's a crime, from my perspective. We're talking about children who for a year and a half sat at home, and they are under emotional stress.”

Shasha-Biton was asked how COVID-19 vaccinations are different from other vaccinations that have been administered in schools for many years. She answered, “We have a different situation now; these children are returning after a year and a half. We have to be very sensitive; we are talking about creating boycotts that stress the children. After all, the parents are the ones who should decide if their child will be vaccinated.”

On the other hand, Shasha-Biton said that she has no problems regarding vaccinating children in school — but after hours, not during class time. For several analysts, the subtext of all this was that she refuses to take an active part in the government’s struggle against the coronavirus, and sets herself apart.

This was not an easy situation for Bennett who as a new prime minister is facing the challenge of stopping the fourth coronavirus wave, viewing vaccinations as his chief weapon. Bennett called the fourth wave the “epidemic of the nonvaccinated.” Apart from vaccinating in schools, Bennett had pushed recently the decision to administer a third booster shot to the elderly population, even before it received Food and Drug Administration authorization. As of today, more than a million Israelis over the age of 50 have received a third shot, thus turning Israel into the first state in the world to adopt this step.

In fact, on Aug. 20, the Health Ministry authorized people aged 40 and over to get a third shot, and even recommends now for pregnant women to get vaccinated. For Israeli health experts, it became clear that, over time, the vaccinations lost some of their effect and a booster shot was needed to avoid lockdowns. Recently, it was announced that the United States will also administer a third dose to all its citizens. Obviously, this reinforced Bennett in his move for the third shot.

Shasha-Biton’s stance on vaccinating in schools was viewed by many in Israel as weakening Bennett’s general strategy on battling the pandemic, and even serving as political ammunition for those opposing vaccinations. Today, in Israel, there are more than a million people aged 12 and up who have not received even one vaccination dose; some are radical "anti-vaxxers" while others are simply leery of possible side effects. The Health Ministry continues to try and convince the opponents of the safety of the immunization and its effectivity.

Shasha-Biton opposing COVID-19 vaccinations in schools is not the first time she is resisting the government. During the former Netanyahu government, she served as the Knesset Coronavirus Committee chairwoman, where she took an oppositional stance against COVID-19 limitations and blamed the government and the Health Ministry for unnecessary lockdowns. At the time, this stance made her popular among the general public that wanted the lockdowns and other restrictive measures to disappear. Meanwhile, Shasha-Biton left the Likud, became one of the founders of New Hope, and after the March 2021 elections she was appointed education minister. In this position as well, Shasha-Biton continued her skeptical, overly inclusive approach vis-a-vis the coronavirus struggle.

Students, parents, educators and school masters are now confronted with more coronavirus struggles related to personal rights. On Aug. 16, the Justice Ministry informed the government that legally, school admissions cannot be predicated on any kind of vaccination certificate or negative blood test. Indeed, no other government in the world has done so. A meeting of professionals was held Aug. 16 at the Justice Ministry, and it was explained that there is a legal “catch” in revoking a child’s rights for education due to a decision by the parents not to vaccinate and/or not perform a COVID-19 test. In light of all this, it seems that the widening of vaccination campaigns in schools appears to be the only solution that will enable ongoing, uninterrupted learning this coming school year.