The recent attacks on vessels in the Red Sea by Yemen's Houthis and the United States threaten international trade along this route. 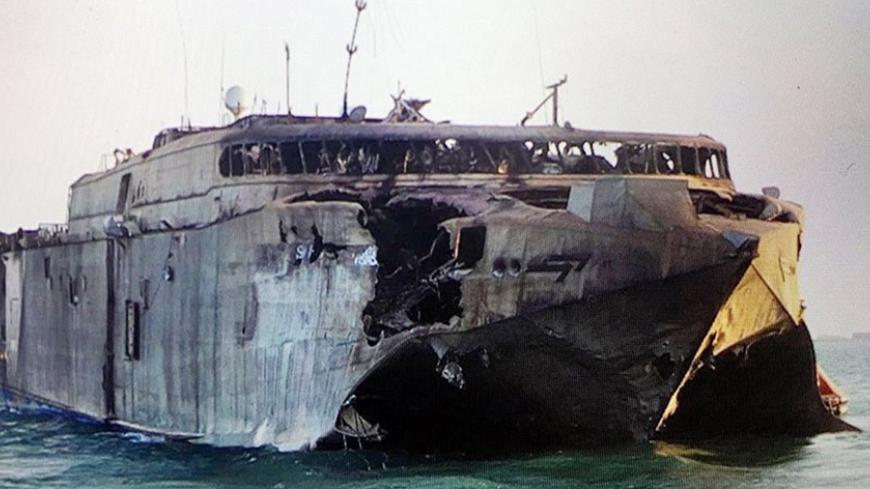 The HSV-2 Swift, formerly operated by the US Navy and now by the United Arab Emirates, is seen damaged in a still from a video released by WAM news agency, after being attacked by Houthi rebels in the Bab el-Mandeb Strait, off the coast of Yemen, Oct. 1, 2016. - Facebook/@WorkBoat

The United States has accused Yemen’s Houthi rebels, who took over the country’s capital in September 2014, of launching multiple attacks by anti-ship missiles — two Oct. 10 and a possible third Oct. 15 — on its ships in the Red Sea. These attacks came after the Houthis targeted the United Arab Emirates (UAE) vessel SWIFT and released footage of the attack.

While the Houthi attack that damaged the UAE’s SWIFT on Oct. 1 was strongly condemned by the UAE, which called it an “act of terrorism,” the US reaction to attempted missile strikes on its ships was fiercer. In retaliation against the attacks on the US destroyer Mason destroyer and the amphibious transport dock Ponce on Oct. 10, the US military targeted three coastal radar sites along the Red Sea despite the Houthis’ denial of carrying out those attacks against the US targets.

It did not take long before the anti-ship missile attack on the destroyer was thought to be repeated. This suspected attack came Oct. 15, hours after the release of two US citizens who were held captive in Sanaa by the Houthi rebels. They were flown to Oman in what was seen as a gesture of goodwill toward the United States. The Houthis denied any connection with the suspected attack, which raised speculation about the identity of those responsible for the attacks and even about the attack itself.

After initial reports that there might have been a malfunction with the destroyer’s radar detection system during the third presumed attack on the Mason, the Pentagon declined to state whether the Mason indeed had been targeted by anti-ship missiles Oct. 15.

These latest developments complicate one of the region’s complex conflicts. While they reflect an evolvement in the military capabilities of the alliance between the Houthis and their old foe and current ally, Yemen’s former President Ali Abdullah Saleh, enabling them to reach new targets and thereby signal their resilience and ability of continuing their war, they also take the Yemeni conflict from the regional to the international arena by posing a threat to international trade that passes through the Red Sea.

While the Houthis declined to declare responsibility for those anti-ship missile attacks, the fact remains that the repeated attacks on ships in the Red Sea pose a great threat not only to the military presence in the Red Sea, but also to trade and shipments that go through the Red Sea as well as the Bab el-Mandeb Strait — one of the world’s busiest trade routes.

The UAE’s description of the attack on its SWIFT vessel as an “act of terrorism” and the quick reaction of the United States to the attacks on ships in the Red Sea suggest not only that the smuggling of new weapons to the Houthi rebel movement — which Oman is mainly accused of — will not be tolerated, they also suggest that threatening the security of trade in the Red Sea will also not be accepted.

Around 4 million barrels of oil are shipped daily through the Bab el-Mandeb Strait and the Red Sea. Such attacks put shipments at great risk and raise costs of insurance for those shipments. While halting shipping through Bab el-Mandeb is unthinkable for international trade, the securing of the Red Sea remains crucial for international stakeholders — such as Europe and the United States, which are highly dependent on oil shipped from the region — as well as for two of the leading countries in the Saudi-led coalition: the UAE and Egypt.

With all its current economic problems, Egypt cannot afford to see revenues from its Suez Canal decline, especially after the disappointing revenues following the canal’s expansion. The UAE also is interested in securing its investments across the Red Sea, where the state-owned Dubai Ports World owns and manages many East African ports. Since the start of the Saudi-led war on Yemen in March 2015, the UAE landed two deals to manage Red Sea ports. In May 2016, Dubai Ports World won a 30-year deal to manage the Berbera Port of Somaliland after it also landed a 30-year lease agreement in late 2015 to use the Eritrean Port of Assab — 60 kilometers (37 miles) from the coast of Yemen — for military purposes, according to a UN report. Dubai Ports World has been managing the Djibouti Doraleh Container Terminal since 2008.

This threat to international trade and ports across the Red Sea might be used by the Houthi-Saleh alliance as a leverage to strengthen their position in any future round of negotiations. There is a clear message from the Houthi-Saleh alliance to the international community that the Houthis can and will target ships in the Red Sea. This is particularly the case following the news that the Supreme Political Council — which was self-appointed by the Houthis and Saleh on July 28 — intends to name the internationally notorious — and since 2010 UN-sanctioned — arms dealer Fares Manaa as minister of trade and industry.

While securing the trade route in the Red Sea is crucial for the international community, establishing a sustainable peace plan that guarantees the state’s monopoly on force remains a more efficient mechanism to secure Yemeni coastlines, and thereby ensure a safer trade route.