Will tension at sea lead to endless war in Yemen?

The Yemeni war reached the sea after being confined to the mainland for 19 months, with international and regional players heading to the most important maritime route in the world. 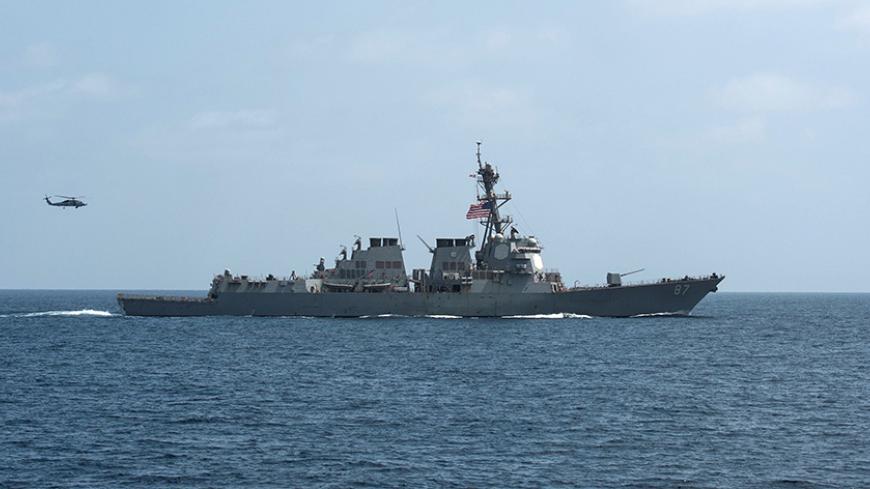 The US Navy guided-missile destroyer USS Mason conducts divisional tactical maneuvers as part of an exercise in the Gulf of Oman, Sept. 10, 2016. The destroyer recently came under attack off the coast of Yemen. - U.S. Navy/Handout via REUTERS

SANAA, Yemen — After being confined to Yemen's mainland for the past 19 months, the country's civil war has finally spread to the sea in a major development that mobilized the fleets of international and regional players.

On the evening of Oct. 12, a US Navy destroyer launched Tomahawk missiles against three radar sites on the Yemeni coast after a failed missile attack against a US destroyer on Oct. 9. Washington believes that the radar stations, which are under the control of the Houthis, had targeted the USS Mason off of Yemen’s coast on Oct. 9.

This engagement in one of the most important maritime routes in the world has been in the making since Oct. 1, when Ansar Allah, a Houthi group, announced the targeting of a UAE ship in Bab el-Mandeb Strait with an anti-ship missile. The attack seriously damaged the US-flagged Swift 2. The United Arab Emirates said "the targeting will have serious implications for freedom of navigation."

The said attack was not limited to the Emirati ship, as a US destroyer was also targeted three times in a week while sailing in international waters in the Red Sea. The most recent attack was against the USS Mason on Oct. 15 from Yemeni territory in an apparent escalation of military operations in Bab el-Mandeb.

A US defense official told Reuters on condition of anonymity that several rockets were launched against the USS Mason while it sailed in international waters, but the destroyer used countermeasures to prevent a direct hit.

A source in the city of Hodeidah told Al-Monitor on condition of anonymity that the three US missiles targeted radars belonging to the Yemeni coast guard — the first in the Ras Isa region, the second in the al-Khawkha region in the province of Hodeidah and the third in Bab el-Mandeb on the coastal strip in Taiz province.

Yemeni affairs researcher Mohammed Saif Haider said that this is the first escalation of its kind in Bab el-Mandeb since the October 1973 war, which the Egyptian and Syrian armies had launched against Israeli forces and had led to a halt in navigation in the Strait.

Haider told Al-Monitor, "From a military point of view, this tension will be limited, but it will raise concerns in the long run."

After the incident, the Houthis and their allies rushed to categorically deny responsibility for the rockets fired against the US destroyer. Sharaf Luqman, the military spokesman for the Houthis, said they control their fighters and weapons on the coast of Yemen. US officials told Reuters, "There are growing signs that the Houthis, despite their denial, were responsible for the incident."

The Houthis are in control of areas in Yemen's western coast that extend from Bab el-Mandeb in Taiz province to the Midi district in Hajjah province, a distance of up to 400 kilometers (250 miles).

Journalist Khaled Abdul Hadi commented on the recent escalation by saying that even if the US warships were not targeted from the Yemeni coast, any threat against navigation in one of the most important waterways in the world would trigger a US response or a US-led international response. That is because such a step deals a blow to world trade, and trade flow is a pillar of the global economic system led by the United States, the self-proclaimed protector of global trade rules.

Amid tensions in Bab el-Mandeb — through which more than 3.4 million barrels of oil passed through every day in 2013 — the Washington Institute said Oct. 12 that following the targeting of the UAE-operated Swift, the USS Mason destroyer joined the USS Nitze and the amphibious transport ship USS Ponce on Oct. 9 to patrol Bab el-Mandeb.

For its part, Iran sent the warships Alvand and Bushehr to Bab el-Mandeb on Oct. 13 and said they aimed at protecting commercial ships from piracy — thus gaining a foothold in the region.

Abdul Hadi told Al-Monitor, "Based on facts related to the Houthis' capabilities and the requirements of maritime confrontation, and even if rebels had a large say in the land war that has been ongoing for 19 months, the fact remains that the decision of war at sea is not in their hands, but in the hands of their regional supporters in Tehran."

The US destroyers' attacks are the first direct US military action against the rebels, and it coincides with the ongoing drone war against al-Qaeda in Yemen.

Haider believes that tensions in Bab el-Mandeb would have a significant impact on relief action, prolong the process of inspection of ships coming toward Yemen and result in a shortage of food supplies. "We might enter a new type of long conflict," he added.

The civil war in Yemen has led to a famine and the spread of diseases such as cholera. More than 10,000 people have been killed since March 2015.