Is an 'Arab NATO' in the works?

Reports claim that the US administration is currently discussing the formation of a joint Arab force with Arab countries, an idea Egyptian President Abdel Fattah al-Sisi had suggested before. 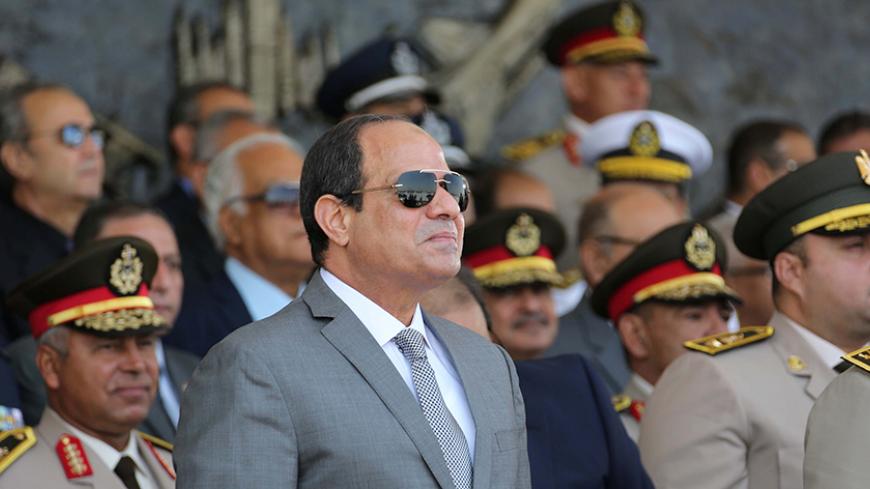 CAIRO — The convergence of views between Egyptian President Abdel Fattah al-Sisi and US President Donald Trump has seemingly led Trump to turn into a facilitator of Sisi’s dreams. These dreams include banning the Muslim Brotherhood and founding a joint Arab force. On Feb. 15, The Wall Street Journal quoted unnamed Arab officials as saying that the Trump administration is in talks with Arab allies about forming a military alliance that would share intelligence with Israel to help counter their mutual foe, Iran.

The US newspaper noted that the alliance consultations are underway with Egypt, Jordan, Saudi Arabia and the United Arab Emirates (UAE).

The Wall Street Journal report also revealed that the Trump administration asked Egypt to host negotiations on an Arab military alliance and that the alliance would have a NATO-style mutual-defense component under which an attack on one member would be treated as an attack on all.

Sisi had raised the idea of the Arab military alliance on Feb. 22, 2015, in a recorded speech broadcast on Egyptian state TV. He said the need to form a joint Arab military force is increasing by the day, at a time when the Arab region is facing the risk of militant groups.

Also, the closing statement of the 26th Arab Summit confirmed on March 29, 2015, that the Arab leaders endorsed the formation of a joint Arab military force to meet the challenges and maintain the Arab national security, and that the details of such a force and its creation mechanisms would be agreed upon within four months. As he read the final communique, former Secretary-General of the Arab League Nabil Elaraby confirmed that participation in such a force would be optional for the Arab League states.

Based on the closing statement of the Arab League, the first meeting of the Chiefs of Staff of the Arab armies took place at the headquarters of the Arab League in Cairo on April 21-22, 2015, and it was headed by Egyptian Chief of Staff Lt. Gen. Mahmoud Hijazi and attended by the Chiefs of Staff of the armies of Saudi Arabia, the UAE, Qatar, Kuwait, Morocco, Tunisia, Algeria, Sudan, Libya and Jordan. The group agreed on the formation of a broader working group to discuss the formation, mission and funding sources of the force.

Based on the findings of the group, another meeting was held between the Chiefs of Staff on May 24, 2015, to discuss the initial protocol for the establishment of the joint Arab force and subsequently raise it with the defense ministers of the concerned countries in preparation for its adoption in a new meeting in August.

In a statement on Aug. 26, 2015, the Arab League said that the Arab defense and foreign ministers' meeting to approve the final joint Arab force protocol had been indefinitely postponed upon the request of Saudi Arabia, the UAE, Kuwait and Qatar, to further examine the protocol. No new date has been set until this year.

Also, the Arab League summit held in Mauritania's capital, Nouakchott, on July 25-26, 2016, settled for tasking the current secretary-general of the Arab League, Ahmed Aboul Gheit, with following up on the implementation of the joint Arab force mechanisms. This task has had no outcome.

Tarek Fahmy, a professor of political science at Cairo University, told Al-Monitor that the diverging visions of the Arab countries on the areas that the joint force should intervene in was behind the stalled negotiations. “The Gulf states believe the priority is for Yemen, and their vision may change with time to include both Yemen and Syria, while Egypt and Tunisia believe the priority is for Libya,” he said.

Fahmy added, “I would have preferred Sisi’s joint Arab force project to Trump’s Arab version of the NATO. The US support for the alliance is not an advantage because it is likely to be limited to [counter] Iranian influence in the region, and Egypt is no longer the biggest beneficiary of countering the Iranian influence, especially amid Iran's attempts to improve its relationship with Egypt.”

He further explained, “Also, Trump’s call included intelligence cooperation with Israel, which I think is out of the question for most Arab regimes, especially Egypt. Even if it seemed to some that there is a political understanding between Egypt and Israel now or a limited intelligence understanding, it is difficult for such an understanding to turn into a permanent cooperation and a basis for an alliance.”

Mohammed al-Shahawi, the former chief of staff of chemical warfare and adviser to the US Army Command and General Staff College, told Al-Monitor that ​​Trump’s idea is similar to Sisi’s and that he welcomes such an idea because the project of an Arab military alliance moves forward with the support of an international force like the United States.

Asked about the fact that Trump’s call is limited to countering Iranian influence, Shahawi said, “It is the right of Arab countries to develop their own counterterrorism goals in addition to resisting the Iranian influence. Resisting Iran's influence will positively affect the fight against terrorism as Iran is involved in supporting many of the terrorist organizations.”

Although experts have diverging views on the Arab NATO’s usefulness for Egypt and the extent of its conformity with Sisi’s call for a joint Arab force, the diverging Arab views on the areas of expertise of such a force will probably hinder its formation, at least for the time being.