Is this the start of Arab NATO plan?

The Arab Nato plan promoted by US President Donald Trump to counter Iranian influence is being recurrently heard among the political quarters of the countries participating in the Arab Shield 1 drills in Egypt. 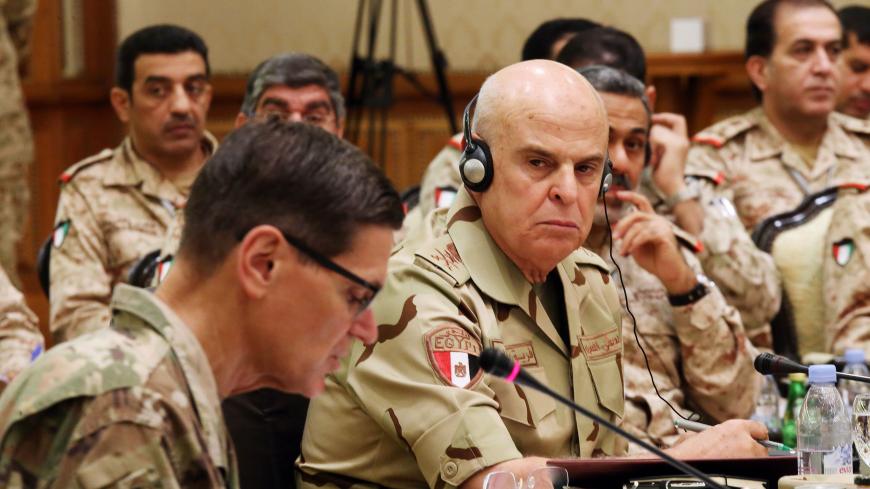 CAIRO — Col. Tamer Rifai, spokesman of the Egyptian armed forces, announced in an official statement Nov. 7 that Lt. Gen. Mohamed Farid Hegazy, chief of staff of the armed forces, attended the Arab Shield 1 military exercises, which started Nov. 3 and will last until Nov. 16. The drills are held at Mohamed Naguib military base in Matrouh, on the Mediterranean coast west of Alexandria.

Rifai also followed up on the different stages of the exercises and watched live shooting drills carried out by all participating forces.

On Oct. 31, the Egyptian Ministry of Defense had noted in a statement that land, naval and air forces, special forces and air defense forces from Saudi Arabia, the United Arab Emirates, Kuwait, Bahrain and Jordan arrived in Egypt to take part in the military exercises alongside Egyptian troops. Lebanon and Morocco have joined the exercises as observers.

The statement said that the military exercises aim to “face common challenges and support efforts for security and stability in the region.”

Commenting on Arab Shield 1, Brig. Gen. Safwat al-Zayat, an Egyptian expert in military affairs, said that a state of anxiety prevails within the Arab region. He noted the escalating pace of military maneuvers among Arab countries or between them and countries outside the region.

Speaking to Al-Monitor over the phone, he said, “The Arab Shield 1 exercises come amid [Arab] fears of armed conflicts in the region. The situation in Yemen is deteriorating, the conflict in Syria is ongoing and the crisis in Libya is worsening.”

Ruling out the possibility of a Pan-Arab military alliance in the near future, Zayat pointed to the frequent disagreements among some Arab countries. “Qatar and Oman are not participating in the current exercises. Arab disagreements hinder the formation of a Pan-Arab military alliance,” he said. “Even the fear of the Iranian influence failed to get Arab states to unite in a single bloc.”

Reuters reported July 27 that White House and Arab officials talked about US President Donald Trump seeking to revive plans to form an “Arab NATO” in order to confront Iran. Zayat described Trump's proposal to form a Middle Eastern military alliance to preserve the stability of the region as an ambitious proposal.

He noted, “The situation in the Arab region does not bode well. Washington focuses on facing the Iranian influence, but not all Arab countries have the same stance on Tehran. Egypt and Jordan are cautious about the Iranian expansion, but not as much as Saudi Arabia, the United Arab Emirates and Bahrain. Kuwait, Qatar and Oman also have cautious relations with Iran. There is no Arab consensus that Iran is an enemy.”

Zayat said, “Saudi Arabia may accept Egypt as a member within a military alliance, but not within the Gulf Cooperation Council.” He affirmed that a military alliance requires an agreement on the threat sources, the military command structure and operations management. “All these details are still vague. Not to mention the varying political orientations among the Arab countries,” he added.

Tamer al-Shahawi, a member of the parliamentary National Defense and Security Committee and a former Egyptian military intelligence officer, said that a joint Arab force is a longstanding Egyptian demand, stressing the need for such a force to protect the Arab region. He noted, however, that some Arab countries may not have the political will to establish such a joint force.

He told Al-Monitor over the phone, “The Arab region is dealing with several interconnected and complex issues. A common stance should be adopted on all these issues in order to form a Pan-Arab military alliance.”

Shahawi noted that there will be no military cooperation between Egypt and Arab countries before a general Arab agreement is reached on the Syrian crisis and the Palestinian cause.

He explained that a Pan-Arab military force would impose on all its members a specific security policy. “Egypt sees Syria as an extension of its national security. For Saudi Arabia, Yemen is a priority and an extension of its national security. The Egyptian leadership wants to keep the regional conflict political while Saudi Arabia seems to favor military interventions.”

Shahawi added, “The Arab Shield 1 exercises are professional military drills. If we are not able to form a military alliance, we should at least conduct joint military exercises. We must be ready in the event any political struggle in the region turns into a military conflict.”

Saeed al-Lawindi, an international relations expert, finds it unlikely that a Pan-Arab military alliance would be established at the moment. “Some Arab countries — such as Egypt, Saudi Arabia, the UAE, Bahrain and Jordan — might establish their own small military alliance to address a particular issue while neglecting the other outstanding issues,” he told Al-Monitor. “Should this experiment succeed, such an alliance may expand to include other Arab countries.”

The chiefs of staff of the Arab armies met in 2015 to discuss the creation of a joint Arab force. The meetings were unsuccessful. The Arab League revealed on Aug. 26, 2015, that it received a request from Saudi Arabia to postpone a meeting of member state defense ministers, who were scheduled to ratify a protocol for a joint military force.

Egyptian President Abdel Fattah al-Sisi affirmed Nov. 6 at a youth forum in the Red Sea city of Sharm el-Sheikh that the Egyptian armed forces would come to the defense of Gulf Arabs against any danger or a direct threat. He asserted that Egypt would not isolate itself amid a difficult regional situation.