Russia and Arabs agree on US, spar over Iran 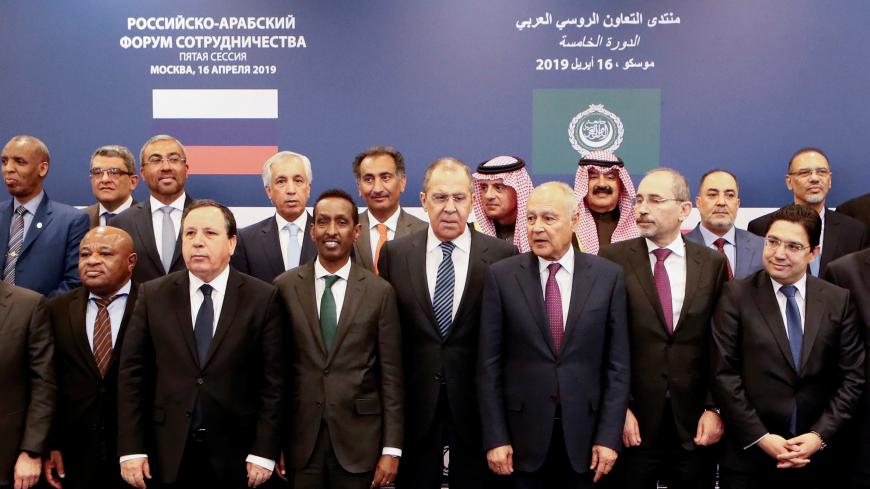 On April 16, Moscow hosted the fifth ministerial session of the Russian-Arab Cooperation Forum, which was attended by an unprecedented number of top Arab diplomats. Organized by the Russian Foreign Ministry and the Arab League, the meeting testified to a self-evident fact: Relations between Russia and the Arab world seem cordial, at least when it comes to their disagreement over the US vision of a world order. This happy idyll, however, is illusory, as the relationships are riddled with differences, many of which are rooted in the discord within the Arab camp itself.

The conference in Moscow produced two documents: a declaration and a three-year action plan. The latter covers cooperation opportunities for businesses, nongovernmental organizations and academia in different spheres, ranging from the economy to culture. As for the specifics, they include a commitment to participating in various trade show exhibitions for the manufacturing and food industry. Both documents were made available to Al-Monitor.

The Russian-Arab Cooperation Forum was inaugurated in December 2009 by a Cairo memorandum. The forum is tasked with coordinating positions on international issues and encouraging stronger bilateral relations. However, the first ministerial session took place years after the forum's inception, in February 2013, at the height of the Arab Spring and after Vladimir Putin’s return to the Kremlin. The succeeding meetings were held in Khartoum (late 2014), Moscow (February 2016) and Abu Dhabi (February 2017).

The original idea was to hold sessions annually, but the plan was scrapped amid the rift between Qatar, on the one hand, and Saudi Arabia, the United Arab Emirates, Egypt and Bahrain, on the other. Now the opposing sides are often seen at the same meetings. Indeed, both Qatar’s emir and Saudi Arabia’s king were present at the March Arab League summit in Tunisia. This time, the two countries dispatched to Moscow state ministers for foreign affairs Adel al-Jubeir and Soltan bin Saad al-Muraikhi, respectively.

The Russian foreign minister was initially supposed to meet with the Arab League troika, including the secretary-general and the current and former chairs (other ministers were also “welcome to join”). Apart from Arab League Secretary-General Ahmed Aboul Gheit, the recent Moscow forum brought together a record 13 Arab foreign ministers from Algeria, Jordan, Yemen, Qatar, Lebanon, Morocco, the UAE, Oman, Palestine, Saudi Arabia, Somalia, the Comoro Islands and Tunisia. Another eight member states were represented by lower-ranking officials, with ambassadors replacing Sudanese, Bahraini and Mauritanian diplomats at the negotiating table.

Surprisingly absent from the conference was Libyan Foreign Minister Mohamed Siala, even though he was on the list of attendees compiled by the Arab League. Moreover, Deputy Foreign Minister Mikhail Bogdanov had earlier announced Siala’s possible arrival. Yet he may still come to Moscow — even if not to the meeting — to potentially avoid a heated discussion among all the Arab participants, who are outspoken in their support of rival Libyan factions.

Moscow faced controversy on the wording of the final declaration, which calls on all the parties to the Libyan conflict to refrain from military escalation. Some countries insisted on designating the operation led by Khalifa Hifter a “fight against terrorism.” However, that language was not included in the finalized version.

“We hope the parties will still perceive the need to put an end to the hostilities and resume the political settlement process under the UN auspices,” Secretary-General Aboul Gheit told Kommersant. He stressed that the Arab world and Russia largely see eye to eye on the Libyan issue.

Syria is an entirely different case. There is much more room for debate, sources within different delegations told Al-Monitor during the conference. In particular, the Arab party ensured that the declaration avoids mentioning the role of Turkey and Iran in the Syrian settlement. The text, however, refers three times to the successes of the Astana format, which sees Russia cooperate with Turkey and Iran. The declaration thus welcomes Russian efforts to reach a political solution in Syria, including its work on a cease-fire and de-escalation zones. It also praises the United Nations for its contribution to establishing a constitutional committee and the prisoner exchange.

Yet the declaration did not include the Moscow-proposed clause that the Syrian National Dialogue Congress held in Sochi last January was a “step forward.”

The declaration also fails to touch on Syria’s reentry to the Arab League. Asked this question by Kommersant newspaper, Aboul Gheit stressed the differences between Moscow and Arab states over the Syrian issue.

“Russia is trying to push it [Syria’s restored membership in the Arab League] through, but some Arab states believe that Syria’s readmission should only follow some advances in the political and constitutional process,” he said.

The Turkish issue was brought up during the discussion on both Iraq and Syria. The declaration rules out any interference in Syrian internal affairs, including a Turkish military presence. Aboul Gheit told Sputnik that Arab states “adamantly oppose Turkey’s intervention in Syria and Iraq.” Qatar, however, was hesitant “to name, in particular, Turkish forces in the paragraph on Iraq.”

Given the sensitive attitude of the Arab guests to Turkey and Iran, Sergey Lavrov’s words came as a surprise. He stated at the press conference that “the declaration, which we approved today, stresses the importance of normalizing and improving relations between the Arabs and Iran in the interests of peace and stability.”

Aboul Gheit made it clear that the declaration contains a noninterference clause referring to the regional states.

“Thus, the Arab states have interpreted the statement as follows," he explained. "Iran cannot interfere in our affairs. Should it refrain from doing it, relations will improve.”

The declaration indeed contains both messages. One paragraph mentions the importance of establishing relations between Arab states and the Islamic Republic of Iran “on the basis of the principles of good-neighborliness, refraining from the use of force, noninterference in internal affairs, respect of independence, sovereignty and territorial integrity, resolving all disputes through peaceful means, as well as the importance of the Gulf Cooperation Council initiative conveyed in the message of His Highness the Emir of Kuwait to the Iranian president to enhance peace and security in the region.”

The other paragraph expresses concern over “the lack of progress between the UAE and the Islamic Republic of Iran over the three islands (Greater and the Lesser Tunbs and Abu Musa)” and affirms the support “to reach a peaceful solution to the dispute.”

Somali Foreign Minister Ahmed Isse Awad joined Lavrov and Aboul Gheit for the final press conference as Somalia assumed the chairmanship after the Tunis summit. Lavrov highlighted the need for implementing the decision adopted back in 1995 to convene a conference on the creation of a WMD-free zone in the Middle East. He argued that “some Western countries” had resisted it, but the recent UN General Assembly session had resulted in the adoption of a resolution to launch the process this year. Lavrov also noted that the declaration “contains a very important aspect supporting the integrity of the nonproliferation treaty.”

In turn, Aboul Gheit pointed to the similar stances of Russia and Arab states and emphasized the significance of a new Arab cultural center in Moscow. Diplomatic sources at the conference told Al-Monitor that the Arab League still needs to raise funds for the project. The most concise remarks were given by the Somali foreign minister, who thanked Moscow for its backing of the Palestinians — one of the issues Russia has continuously pursued as part of the effort to thwart Donald Trump’s “deal of the century.” The next session of the Russian-Arab Cooperation Forum is due in Morocco in 2020.