How did Lavrov do on his Gulf tour?

During his tour of the Gulf, Russia's Foreign Minister Sergey Lavrov treaded carefully around politics, opting to speak publicly about a safer topic, economics. 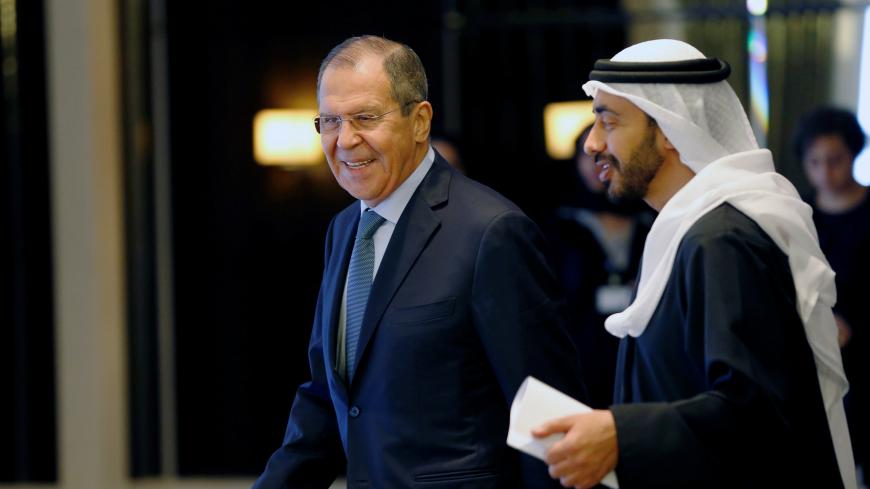 Russia’s Foreign Minister Sergey Lavrov recently concluded a four-day trip to the Persian Gulf. As Lavrov tried to navigate a political minefield, he carefully chose his words and was cautious about the topics he discussed. He avoided sensitive issues and tailored a custom approach for all his destinations: Qatar, Saudi Arabia, Kuwait and the United Arab Emirates. Sometimes he chose his words so carefully, and without much specificity, that he barely said anything at all. Reporters, accustomed to Lavrov's usual vivid style of speech, could not find much to report on, given the lean nature of his statements.

Contrary to some assessments, Lavrov preferred to focus on prospects of economic cooperation rather than politics. It made sense since the trip's purpose was to invite Arab nations to several events Moscow is hosting in April, including the fifth ministerial session of the Russian-Arab Cooperation Forum, the Arabia-EXPO forum and a session of the Russian-Arab Business Council. Whether the Gulf countries will send high-level visitors is still undetermined.

“The list of guests will clearly indicate whether the Arab business community is actually willing to develop its relations with Russia,” a source in the Russian Ministry of Economic Development told Al-Monitor.

In each Gulf country, Lavrov pushed the same message on economic relations: While cooperation is developing and trade is growing, there’s still more to wish for. The Russians understand that the Gulf is traditionally oriented toward the West, particularly the United States and the UK, and that competition with Western powers is virtually useless. But they believe a niche or two can still be found.

Economic cooperation is practical and has the potential for success in only one of the four stops Lavrov made in the Gulf: the UAE, Russia’s most significant trading partner in the Gulf. Last year, bilateral trade amounted to $1.7 billion, placing the UAE third among all Arab nations, surpassed only by Algeria and Egypt, according to the Russian Ministry of Economy, Trade and Industry. More than 3,000 Russian companies work in the UAE and about 60,000 Russian nationals live there.

Business contacts between Russia and the Gulf are now routine and no longer require additional support from the Russian Foreign Ministry. Investments, too, are on the rise. The Russian Direct Investment Fund (RDIF), in partnership with the Mubadala Investment Company, a sovereign Emirati fund, provided around $1.4 billion to more than 40 projects in various fields, from the oil industry to sports.

RDIF interacts with all Gulf nations, specifically Saudi Arabia, where its scope spreads beyond economic projects. The fund became Riyadh’s bridge to Russian ministries, various business structures, museums, theaters and even media. The relations are burgeoning, causing jealousy in Qatar, although Qatar is also gradually creating a lobby in Russia.

Though trade volume between Russia and Qatar is among the lowest levels in the Arab world — $73.5 million, exceeding only Bahrain and Palestine — Qatar is the region’s largest investor in the Russian economy. Last year, Russia’s minister of energy, Alexander Novak, hinted that Moscow and Doha were discussing joint projects that would amount to $12 billion.

Compared to its ties with Qatar and Saudi Arabia, Russia’s relations with Kuwait do not stand out. Lavrov’s Kuwait visit aligned with a session of the Intergovernmental Commission on Trade and Economic Cooperation. The event had been delayed for more than a year, according to Al-Monitor’s sources, and if it were not for Lavrov’s trip it might have not taken place at all.

The deliverables, however, were intentions, not real initiatives. The session's final protocol states that Russia’s KAMAZ car company is interested in sending installments of cars and special equipment to Kuwait, while Russian Railways is willing to launch infrastructure projects in the country. Previously, Russia planned to take part in the construction of the Trans-Arabian Railway, which would link Saudi Arabia, Bahrain, Kuwait, Oman, Qatar and the UAE. However, this endeavor would first require regional reconciliation.

Military-technical cooperation is complicated by the US factor. Washington pressures its regional partners to block Russia’s entry into the Gulf market. Furthermore, US sanctions hamper the signing of new agreements and the implementation of existing agreements.

The first part of Lavrov’s trip was particularly stressful, as the top Russian diplomat crammed meetings with Qatar and Saudi Arabia into a single day. The minister’s route through the Gulf itself caused suspense. According to Al-Monitor’s sources, the Saudis were displeased that Lavrov would arrive in Riyadh directly from Doha. The sources from the Russian Foreign Ministry said this move was not meant to signal some hidden agenda and that the trip’s schedule had been set long ago.

Lavrov, in turn, insisted that Russia would avoid playing the mediator between Doha and its neighbors, though he admitted Moscow hopes to see the Gulf crisis resolved.

“Russia does not have any initiatives of its own here,” he said during a press conference in Kuwait, adding that Moscow supports Kuwait’s reconciliation efforts.

Considering the bitter rivalry between Doha and Riyadh, the possibility of Russian President Vladimir Putin visiting the region became another sensitive topic. As Putin’s trip to Saudi Arabia is being planned, other Gulf monarchs, including the emir of Qatar, are also seeking a visit from Putin. Last summer, Nurmahmad Kholov, Russia's ambassador to Qatar, told TASS news agency that the country’s elites were awaiting Putin’s visit. The diplomat later said a visit may take place, given the emir’s invitation, but Arab media outlets interpreted the ambassador’s vague statements as an official announcement.

When asked about this matter during a press conference in Doha, Lavrov’s own reaction was ambiguous.

“His Highness, Emir of Qatar Tamim bin Hamad Al Thani, had invited President of Russia Vladimir Putin to visit your country," Lavrov said. "Our leader accepted the request along with the invitations to a number of neighboring nations. The precise date of the trip will be set by the protocol offices of the national leaders.”

Al-Monitor’s sources claim that Putin’s trip to Qatar has not been planned and that the current priority was to justify such a visit to Saudi Arabia. The visit was supposed to take place last winter, but had been delayed multiple times. One alleged reason for the delays is the absence of potential deliverables from the trip. Basically, there’s nothing big for Putin to sign there. Al-Monitor’s sources in the RDIF said, however, that several projects were being prepared for the visit.

As for Lavrov's political agenda in the Gulf, he addressed the conflicts in Syria, Yemen and Palestine at each visit. Lavrov was particularly eager to discuss the Palestinian issue in the context of President Donald Trump’s “deal of the century,” making his most vivid comments on the issue in Riyadh and Abu Dhabi.

He said that efforts were being made to "turn this [Arab] initiative upside down, at first normalizing relations between the Arab nations and Israel and only then considering whether it is necessary to work with Palestinians,” Lavrov said in Riyadh.

The discussions on Syria were more complicated. Lavrov was hoping to have his Gulf counterparts publicly announce Syria’s return to the Arab League. Qatar gave the Russian diplomat the cold shoulder, giving an adamant “no,” whereas the Saudis and Emiratis reacted more vaguely. Lavrov has repeatedly thanked Riyadh for “its commitment to encourage the Syrian opposition residing in Saudi Arabia to make constructive contributions to the political process.” Lavrov met a Syrian opposition delegation led by Nasr al-Hariri in Saudi Arabia.

Kuwait, in this respect, was in tune with Russia on nearly all the significant issues. This became obvious during Lavrov’s press conference with Kuwaiti Foreign Minister Sabah al-Khalid al-Sabah. The latter said his country “will be happy” to see Syria back in the Arab “family.” By that time, Lavrov had spent almost a week discussing Syria’s return to the Arab League and was certainly willing to share this happiness.