Small business lending on the rise for Egyptian women

Small business lending for Egyptian women has increased significantly in 2018, allowing more women, especially in rural areas, to start their own enterprises. 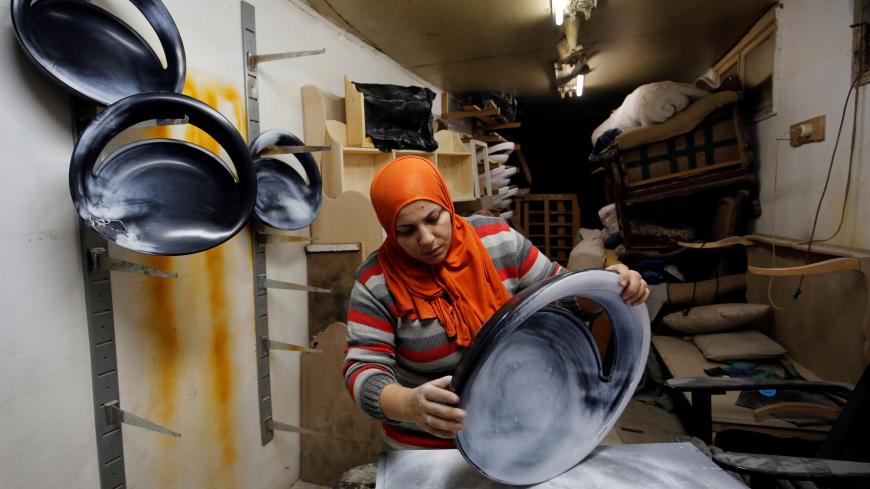 CAIRO — Small businesses continue to serve as a gateway into a better economic life for many Egyptian women, especially in the country’s rural areas and Upper Egypt.

Nevein Gamea, the executive director of the state-owned Micro, Small and Medium Enterprise Development Agency (MSMEDA), said in an April 14 statement that rural women control 51% of the total MSMEDA-funded projects.

At a press conference on the sidelines of the 2019 Arab Forum for Sustainable Development held in Beirut April 10, Egyptian Minister of Planning, Follow-up and Administrative Reform Hala al-Saeed announced that small and medium enterprise (SME) lending for Egyptian women — either through MSMEDA or banks — had increased and reached in 2018 46% of the total funds and loans of the banks and MSMEDA. However, there are no statistics on previous years.

At an international conference held on March 19 on the occasion of International Women’s Day at the Bibliotheca Alexandrina in Alexandria, Nahla Zeitoun, senior social protection specialist at the World Bank, announced the findings of a joint study carried out by the World Bank, Egypt’s National Council for Women (NCW) as well as several local human rights organizations and experts on women’s economic empowerment.

The study showed that in 2018, SME lending for women in Egypt increased to 69% of total general loans from banks, while microcredit for women stood at 51%.

Despite the disparity in the SME lending figures of the study and of the Egyptian minister of planning, these numbers reflect a clear fact that Egyptian women have become a major driver for small and medium-sized projects in the country. The pertinent question, however, is how did women reach this status and to what extent can they contribute to developing the Egyptian economy through such projects?

Gamea told Al-Monitor she believes that this boost in SME lending for women is due to the Egyptian state’s interest in promoting women’s rights as part of President Abdel Fattah al-Sisi’s strategy to empower women, which he launched alongside the NCW in 2016.

She added that Sisi also declared 2017 the “Year of Women” on March 8, which marked International Women’s Day, prompting many Egyptian banks to increase lending to female-run SMEs.

Magued Osman, director of the Egyptian Center for Public Opinion Research (Baseera) and co-author of the World Bank study on women’s economic empowerment, told Al-Monitor that Sisi’s strategy for empowering women served as an incentive for women to be strongly present at the SME level.

However, he explained that according to other studies on the economic empowerment of women — such as the one launched by Egyptian Minister of Investment and International Cooperation Sahar Nasr in March — there are many other factors for women’s economic growth, namely their enthusiasm and drive after long years of marginalization and neglect. “One can say that women are now very eager to prove themselves and to show their potential in all areas, including the economic sphere,” Osman said.

The NCW, in cooperation with the Sawiris Foundation for Social Development, an Egyptian charity, issues twice a year a publication titled Women’s Catalogue, featuring success stories of female entrepreneurs who have proved to be pioneers in SME projects, especially in handicrafts.

Fatima Idris Mohammed, from Aswan governorate in Upper Egypt, is the owner of Al-Arjoun Handicrafts Workshop and Training Center. She told Al-Monitor, “I believe the obstacles facing women in Egypt — particularly in the rural areas — are at the very same time the driving force and impetus behind their success. The greater the challenge, the greater the success.”

She said, “Because of customs, traditions and also the financial hardships in Upper Egypt, I had to drop out of middle school. But I made sure not to make the same mistake with my daughters, as my husband and I were adamant to send our daughters to school until they complete their studies no matter how difficult our financial situation. I also decided to invest in my skills in manufacturing palm extract, which is at the base of many handicrafts, and set up a small workshop.”

Mohammed added, “What started out as a small workshop grew into a business with 30 female workers. I strongly believe in my role to help other women in Upper Egypt to overcome obstacles and complete their studies. In addition to the workshop, I also established a small vocational school to train young women on art skills — such as designing and drawing — that are necessary for them to get admitted into universities and faculties of art or education."

“I believe that social networking sites and access to the world through the internet have played a major role in helping women become pioneers and start their own SME projects. I am always motivated and inspired when I see on social media other women starting their own businesses and succeeding. It gives me an incentive to follow in their footsteps,” Abdel Rahim told Al-Monitor.

Reem Salim, an economic researcher at Egyptian Visions periodical issued by Al-Ahram Center for Social and Historical Studies, believes women will play a prominent role in boosting Egypt’s economy in the coming years through SMEs.

Salim told Al-Monitor that the Egyptian economy has taken many steps to improve its performance through economic reforms since 2016. “Any economy that seeks growth and reform must primarily rely on SMEs. Through these SMEs women will be able to assume a pioneering role.”

Salim referred to one of her studies (not available online) that indicated that SMEs in general account for 51.5% of the gross domestic product (GDP) of developed countries. “SMEs currently represent in Egypt about 25% of the GDP,” she said, hoping that the state support to SMEs and the high level of women's entrepreneurship would increase this GDP percentage up to that registered in developed countries.