Innovative businesses could turn the pandemic-induced downturn into an opportunity to transform Gulf economies. Are government policies responsive enough? 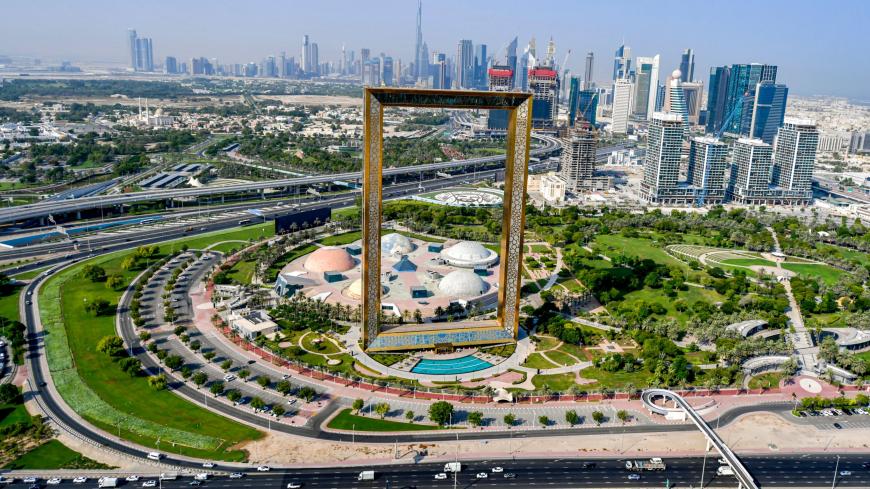 The Dubai Frame landmark in the Gulf emirate of Dubai is seen during a government-organized helicopter tour, July 8, 2020. - Photo by KARIM SAHIB/AFP via Getty Images

Is the COVID-19 crisis a wake-up call for Gulf economies? “Many traditional players were caught off guard" by the economic downturn, said Najla Al Midfa, CEO of the Sharjah Entrepreneurship Center, an entrepreneurship hub in the United Arab Emirates.

Tech entrepreneurs aim to turn the pandemic into a launching pad as Gulf economies are in dire need to hasten their digital transformation. Several obstacles stifle the digital revolution, however, including a shortage of digital skills and a lack of internet freedom, technology-oriented policy makers and research and development investments.

“Startups will play an absolutely vital role in shaping a thriving economy post-COVID,” Midfa told Al-Monitor, saying she believes the economic downturn is an opportunity for startups and tech-based solutions to “integrate the supply chains” of governments and corporates.

The region’s heavy reliance on oil and gas revenues has long overshadowed the role played by small and medium-sized enterprises (SMEs) in diversifying Gulf economies beyond the hydrocarbon industry and providing employment to more than 17 million people.

In Jeddah, AutoSmart digitalizes the workflows of automotive companies. “Systems they use date back to the 1990s, but now everyone acknowledges technology is the next thing!” said Naseef Umar, an Indian citizen who co-founded the startup with a Saudi national.

The rise of online-based businesses would also open Arab economies beyond their traditional straightjacket. “This crisis is an eye-opener for women, many have already started coming up with business ideas,” Ayida Al Riyami, a Dubai-based brand strategist, told Al-Monitor.

Women’s entrepreneurship is gaining momentum in the Gulf, enhanced by legal changes and a better acceptation at the society level. Still, there is a long road ahead: Only 1.4% of all business owners in Saudi Arabia are women, according to a 2018 Mastercard report.

"Gulf governments are not doing enough"

But beyond lofty hopes, short-term realities are less rosy. Fiscal stimulus packages worth over $100 billion aiming at shielding Gulf economies from the downturn might not trickle down to SMEs, experts say, but rather boost the balance sheet of banking institutions.

Therefore, entrepreneurs remain vulnerable and the Dubai Chamber of Commerce warned that nearly 70% of companies based in the Middle East’s business hub could file for bankruptcy within six months. The International Monetary Fund expects the economies of the Gulf Cooperation Council countries to shrink by 7.6% this year.

But can Gulf governments still afford to finance the very same state-driven economies they have tailored for decades? Since the 2014 oil bust, sovereign debts have soared, leaving governmental entities with limited firepower to rescue private companies.

Alternative measures to ease the coronavirus burden for SMEs include a rent-free period for commercial tenants in Dubai, loan postponements and the temporary payment of private sector salaries in Qatar and extra time to file taxes in Saudi Arabia, among others.

Yet economists believe the Gulf’s initiatives are too timid given the extent of the downturn.

Prior to the crisis, bank credit to SMEs in the Gulf region was already the lowest in the world, the IMF said in 2019 report. In the coming months, the appetite of banks for lending to struggling businesses is expected to dry up as risks of bankruptcies increase.

Dembik said the banking sector is "way too prudent" in supporting SMEs. Bankers often argue that poor financial reporting and the opacity of SMEs constrain lending. “I think the best framework to implement would consist in state guarantees up to 100% for loans to SMEs,” he said.

For example, Oman intends to offer interest-free emergency loans to more than 25,000 Omani entrepreneurs hit by the pandemic.

Midfa said she believes non-bank players can also play an active role in easing the access to financial support for SMEs. The Sharjah Entrepreneurship Center launched a $272,000 startup solidarity fund to "enable high-potential startups to extend their cash runways."

Government-led financial support would serve another strategic objective pursued by the Arab states of the Gulf: sending a positive signal to foreign investors. But a study released by the United Nations said short-term prospects for investments in West Asia are bleak.

“We are still seeing demand for the region, but probably just more discerning about where, when and how rather than coming in more aggressively,” said Joe Hepworth, Middle East director for the economic development advisory firm OCO Global.

On the labor market, preference has been given to nationals and the transient workforce that shapes Gulf economies has been largely abandoned, causing an exodus of skilled professionals. In Oman, companies were told not to fire Omani workers, but rather to lay off foreigners.

Yet, despite the exit of migrant workers from the region and the flushing of weak businesses out of the market, Hepworth believes resilient SMEs will emerge stronger. “Following the global financial crisis, the recovery took hold quicker than a lot of people thought,” he said.

Never bet against the Gulf? Entrepreneurs want to believe so as the region is about to enter the post-oil era. On July 5, the UAE announced a more agile government for the federation. “Old school is no more, the Middle East has to catch up,” Umar concluded.