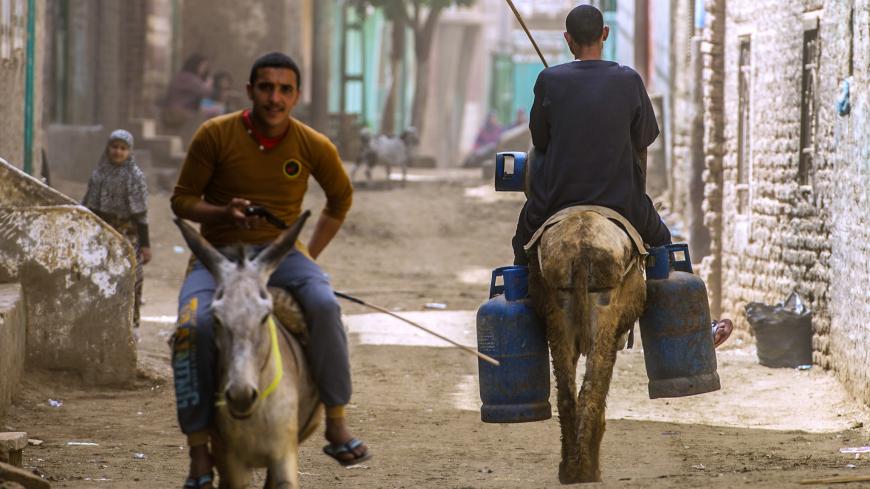 An Egyptian man carries gas canisters on his donkey in the village of al-Jendyaa, south of Cairo, Egypt, April 5, 2016. - KHALED DESOUKI/AFP/Getty Images

“Egypt will be self-sufficient in natural gas, and that will be for the interest of its public treasury, saving the funds that were earmarked to meet the country's needs through imports,” Ramadan Abul Ela, a petroleum engineering professor and vice president of Alexandria's Pharos University, told Al-Monitor.

On April 11, Masrawy quoted an anonymous source at the Egyptian Natural Gas Holding Company as saying that Italian oil and gas group Eni will increase the number of producing wells at Egypt’s giant Zohr gas field. The gas field, which was discovered by Eni in 2015, is located in the Mediterranean Sea north of Port Said. Eni has estimated Zohr's gas resources at around 30 trillion cubic feet.

On March 14, Eni announced a new gas discovery in the Mediterranean Sea near Sinai. “The well has not been tested, however an intense and accurate data acquisition has been carried out,” Eni said in a statement on its website.

“The Zohr gas field will lure more investments into Egypt in the coming years. With the completion of Zohr's third phase at the end of 2019, a number of sectors like fertilizers and petrochemicals will boom. It will also help the country close the gap between production and consumption,” Abul Ela said.

“Egypt should bridge this gap and achieve a surplus,” he continued. “Butane is not found in gas fields. Therefore, Egypt will continue importing butane in the long run. Egypt produces between two and two and a half million tons of butane, while consumption stands at around four million tons annually.”

According to the International Monetary Fund, the “development of several new fields in the Nile Delta and Egypt's territorial waters in the Mediterranean has resulted in a significant increase in production, with gas output increasing to six [billion cubic feet] by September 2018, matching Egypt’s domestic consumption. Gas production is projected to rise further to 7.7 [billion cubic feet] by end-2019 and offers an opportunity to export gas to other countries in the region and elsewhere.”

“Street vendors increase the price to 80 pounds [$4.5] in certain seasons like the Muslim holy month of Ramadan and feasts. This adds more burdens to many families,” Kamal noted, voicing a wish that the National Gas Grid reach his home in El Hawamdeya town, Giza governorate.

The Ministry of Petroleum said in a statement that the National Gas Grid adds between 110,000 and 130,000 new housing units per month. The ministry plans to expand it to 85 districts across the country in the fiscal year 2019-20, which will begin on July 1.

For commercial use, the National Gas Grid is a boon, said Ayman Taha, the owner of a cafe in El-Moneeb, Giza.

“The National Gas Grid is cheaper and safer. I buy four canisters a month for my cafe. The official price is 100 pounds [$5.60]. The vendor gets an extra 20 for delivery,” Taha told Al-Monitor.