Intel: Why Netanyahu can’t go too far in responding to Hamas rockets 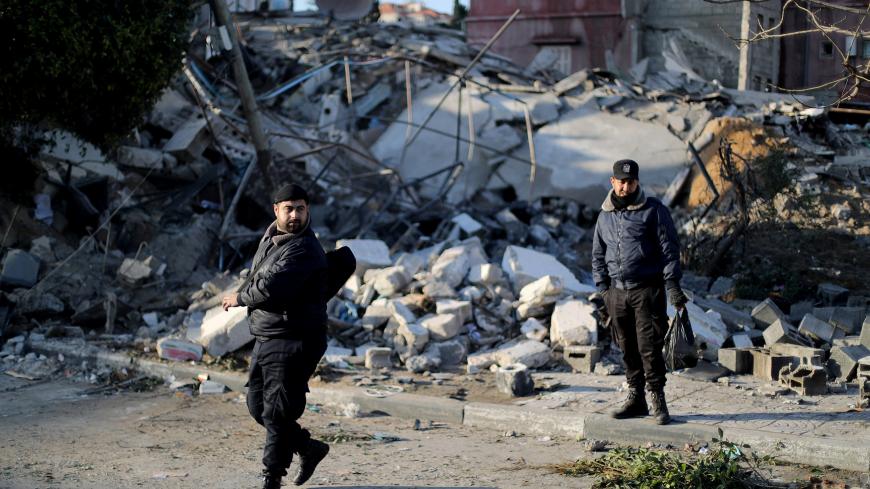 Palestinian policemen loyal to Hamas stand guard at the site of a Hamas-run insurance office after it was destroyed by an Israeli air strike in Gaza City, March 26, 2019. - REUTERS/Mohammed Salem

The Israeli army’s response to the latest Hamas rocket attack that injured seven people in central Israel has remained limited despite political pressure on Prime Minister Benjamin Netanyahu to punch back ahead of next month’s elections. Israel bombed Hamas bases overnight and fired missiles at the office of the militant group’s leader, Ismail Haniyeh. But public calls for a more aggressive response remain unfulfilled; instead, an Egypt-mediated cease-fire is reportedly under discussion.

Why it matters: The Israeli government’s response to attacks from Gaza are a major issue in the April 9 legislative elections. Netanyahu is running on his reputation as a proven statesman who can best defend Israel against its enemies, but he risks looking weak with a tepid response to provocations. His main opposition, the Blue and White party, includes three former army chiefs and a former security minister, and is well placed to capitalize on any loss of trust in Netanyahu’s record on national defense.

Netanyahu's dilemma: A stronger response — such as bombing heavily populated areas, sending in ground forces or targeting Hamas leaders — could lead to full-scale war and mass military and civilian casualties. The goal of such an operation would have to be to topple Hamas in Gaza, with unpredictable costs. And if international uproar once again forces an end to Israeli operations before they’re complete, that would be the death knell of the Netanyahu government’s efforts to reach a long-term agreement with Hamas. Once again, the prime minister’s short-term political interests are clashing with the country’s long-term strategic plans.

The solution: It seems Netanyahu has decided to stick with his security advisers’ recommendations and keep talks with Hamas alive. To reduce political damage, the prime minister has taken to attacking his opponent, Blue and White party leader Benny Gantz, for failing to rein in Hamas when he was chief of staff of the army.

What's next: Netanyahu has gathered his security Cabinet to decide on the next steps. For now it appears Egyptian mediation will lead to a cease-fire. Security officials, however, expect Hamas to push the limits again before the elections.

Know more: Shlomi Eldar explains Hamas’ two-front strategy in the West Bank and Gaza, and why Israel played down a recent rocket strike near Tel Aviv, which is hosting Eurovision in May.