Intel: Why Israel and Hamas aren’t itching for a fight 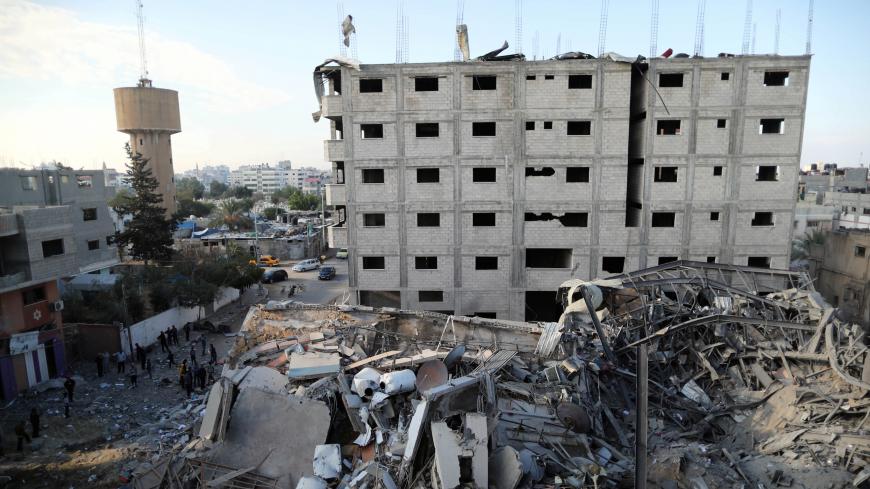 A view shows the remains of Hamas' TV station building that was destroyed by Israeli airstrikes, in Gaza City, Nov. 13, 2018. - REUTERS/Suhaib Salem

Israeli-Palestinian fighting that broke out following a botched Israeli army operation in the Gaza Strip has quickly subsided, with Palestinian factions agreeing to a cease-fire and a return to talks.

Why it matters: The escalating violence risked wrecking weeks of delicate diplomacy between Israel and Hamas as well as regional powers such as Egypt and Qatar aimed at lowering tensions in the Gaza Strip. With Israel’s blessing, Doha has agreed to a $15 million cash infusion to help stabilize Gaza’s depressed economy — and perhaps buy some quiet ahead of Israeli elections next year. The government of Prime Minister Benjamin Netanyahu also hopes to further drive a wedge between the Islamist Hamas, which runs Gaza, and Mahmoud Abbas’ Fatah in the West Bank ahead of the release of a US-led peace proposal that is widely expected to favor Israel.

Unintended consequences: The latest flare-up appears to have started inadvertently when a small Israeli elite unit crossed the border Sunday evening on a mission to deploy a surveillance unit, army sources tell Al-Monitor. A Hamas patrol squad discovered the Israeli soldiers, triggering an exchange of fire that killed one Israeli officer and seven Hamas gunmen, including a senior commander.

Hamas and other Palestinian factions responded by shooting about 300 rockets toward southern Israeli towns near the border. Israel retaliated on Monday, bombing Hamas posts and headquarters as well as the building housing Hamas' Al-Aqsa TV station. The latest casualty toll stands at 13 dead and 30 wounded on the Palestinian side and one death and about 15 wounded inside Israel.

Your move, Hamas: Hamas appears to assume that Israel wants to avoid a wide military operation and that negotiations will shortly resume. Palestinian groups in the strip announced today that they have agreed to an Egypt-brokered cease-fire “to restart the situation that prevailed up until this latest military escalation."

What’s next: The Israeli Cabinet is supposed to meet again tonight to decide on the next steps. For its part, Hamas has announced that it will respond to any further Israeli attacks.

Know more: Shlomi Eldar has a good piece on the internal debates raging inside Hamas and inside Netanyahu’s right-wing government as the two enemies eye a truce. Make sure to read our prescient Week in Review column from Nov. 4, when we asked whether Israel’s restraint in Gaza marked a sea change for Netanyahu or a prelude to war.

Correction: Nov. 27, 2018 An earlier version of this article missated the Hamas TV station Israel bombed in Gaza. It is Al-Aqsa.