Hamas pursues truce with Israel, but not all factions approve

Despite recent clashes between Hamas and Israel, the former seems to be taking steps toward a truce brokered by Egypt and the UN. 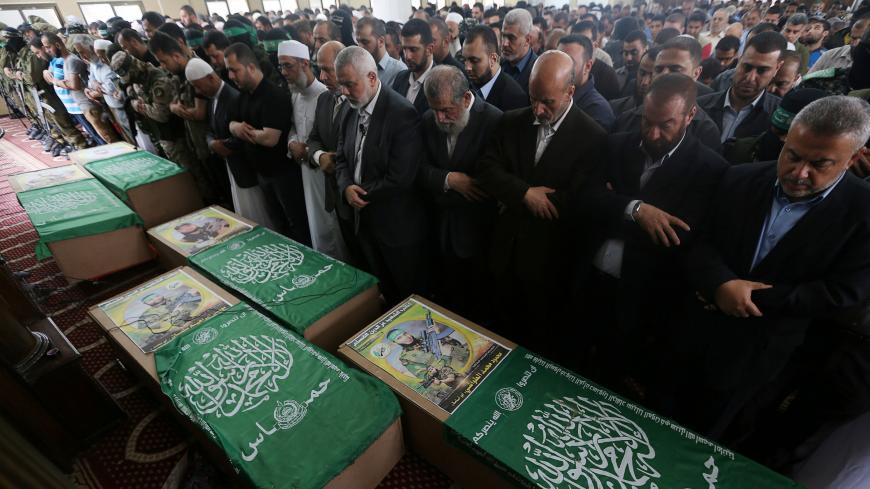 Palestinian leaders pray next to bodies of Hamas militants during their funeral in central Gaza, May 6, 2018. - REUTERS/Ibraheem Abu Mustafa

GAZA CITY, Gaza Strip — Flare-ups earlier this month between the Israeli army and Palestinian resistance factions in the Gaza Strip seemed likely to escalate into an expanded war were it not for the Egypt-brokered cease-fire in place. Instead, Hamas and Israel are close to reaching a genuine truce that could last for years, a high-ranking Hamas source told Al-Monitor.

A real truce, however, will require the PLO's blessing and the participation of various factions besides Hamas.

An Aug. 7-9 flare-up was ignited when the Israeli army killed two Hamas militants in the northern Gaza Strip. The next day, 16 Israeli settlers were wounded by shrapnel from rockets Hamas fired at settlements alongside the Gaza Strip. On Aug. 9, Israel retaliated with airstrikes that killed a girl and her mother who was nine months pregnant.

Yet a Hamas leadership delegation arrived Aug. 11 in Cairo to negotiate a truce with Israel.

Egypt and the UN are trying to mediate a long-term agreement between Israel and Hamas. The quest started July 26 with Nickolay Mladenov, the UN special coordinator for the Middle East peace process, visiting first the Gaza Strip to meet with Hamas chief Ismail Haniyeh and then Israel, where he met with Israeli officials.

The senior Hamas source said, “Despite the escalation, Mladenov and Egypt continue to deploy efforts and are in advanced stages" of talks.

A delegation representing exiled members of the Hamas political bureau, led by Saleh al-Arouri, arrived late Aug. 2 in Gaza to discuss the proposed truce with the Hamas leadership there. The truce was also the focus of the Palestinian National and Islamic Forces Committee’s meeting Aug. 5 in Gaza City, which the exiled Hamas leadership attended.

While the official parties have kept truce talks under wraps, Al-Monitor checked the minutes reports of the meetings between Hamas’ leadership in Gaza and the exiled Hamas leadership. Both call for Hamas to stop launching rockets and incendiary balloons and kites toward Israel, and to stop military activities against Israeli targets in exchange for Egypt, Israel and the UN implementing measures designed to ease Gazans' suffering. The measures include expanding Gazans' fishing zone, opening the Rafah border crossing, facilitating the entry of goods, cement and fuel, and paving the way for UN development projects in Gaza worth $1 billion in sectors such as health, electricity, water, sanitation and temporary employment.

Fatah suddenly said Aug. 5 that it had revived its membership in the Palestinian National and Islamic Forces Committee to participate in the meeting Hamas convened. This came two months after Fatah put its plans to join on hold in protest of Hamas arresting Fatah Secretary Ibrahim Abu Ali on June 2.

As Fatah reactivated its membership, it lashed out at Hamas in the media before the meeting, calling Hamas efforts for a truce with Israel to be “a free gift to Israel and another coup against the people and the homeland.”

Talal Abu Zarifa, a member of the Democratic Front for the Liberation of Palestine (DFLP) political bureau, told Al-Monitor, “So far, Hamas has not suggested a thing regarding the truce talks to the factions.”

Abu Zarifa, who attended that Aug. 5 meeting between the committee and exiled Hamas leaders, explained that the factions demand that Hamas disclose the proposals "for us to agree together on the red lines that should not be crossed in any truce agreement with Israel."

"Yet Hamas’ leadership contented itself with saying that no agreement shall be signed with Israel in the absence of a consensus among the factions," he added.

He indicated that US President Donald Trump's amorphous peace plan, which is said to favor Israel, and the separation between the Gaza Strip and the West Bank are the most notable red lines.

The Hamas source told Al-Monitor that Fatah reactivating its membership changed the course of the meeting between the factions and exiled Hamas leadership. With Fatah present, Hamas didn't put any truce proposals on the table, for fear Fatah might undermine the efforts.

Sarhan Dweikat, a member of Fatah’s advisory council, told Al-Monitor, “We don't oppose the truce. We definitely know that our people need peace. We are, however, against reaching a truce without the [PLO]. Fatah has reactivated its membership in the committee to counter what Hamas is trying to impose on the factions.”

He added, “We have information that communications between Hamas and Israel have been taking place under the table for a long time via regional mediators, to keep the Gaza Strip separated from the West Bank, thus well establishing the homeland’s fragmentation."

Commenting on Fatah’s stance toward Egypt, Dweikat said, “Egypt is committed not to conclude a truce unless we give our consent to its terms."

In an Aug. 8 interview with al-Mayadeen TV, Mohammed Hindi, a member of the Palestinian Islamic Jihad, said, “We refuse to bring the resistance to an end in exchange for a yearslong truce. Bartering the sufferings for humanitarian enhancements is rejected. … Hamas isn't the only faction [involved] with the truce. All of the other factions are also concerned with it.”

Mariam Abu Daqqa, a member of the Popular Front for the Liberation of Palestine (PFLP) political bureau, told Al-Monitor, “The PFLP does not welcome any truce with Israel as long as the latter continues to occupy the Palestinian territories.” She added that her party “will commit to a truce if all of the factions give their consent to it.”

She continued, “The truce agreement should not be concluded between Israel and a particular party. We are committed to the PLO as a political reference for our people, and no agreement shall be made outside the PLO.”

Abu Zarifa pointed out, “The DFLP’s consent to any truce with Israel is conditional on a number of things. The West Bank is part of the homeland. Also, the truce should not be concluded in exchange for political concessions correlated with the Palestinian constants, such as Jerusalem, the prisoners and Palestinian refugees.”

On Aug. 13, Cairo called on the factions that oppose a truce with Israel to visit Egypt for deliberations in the presence of Hamas and Fatah leadership in the upcoming days.