Egypt celebrates its own Women's Day

As Egyptian women celebrate the 100-year anniversary of their participation in the first march during the 1919 revolution, the National Council for Women sheds light on their achievements. 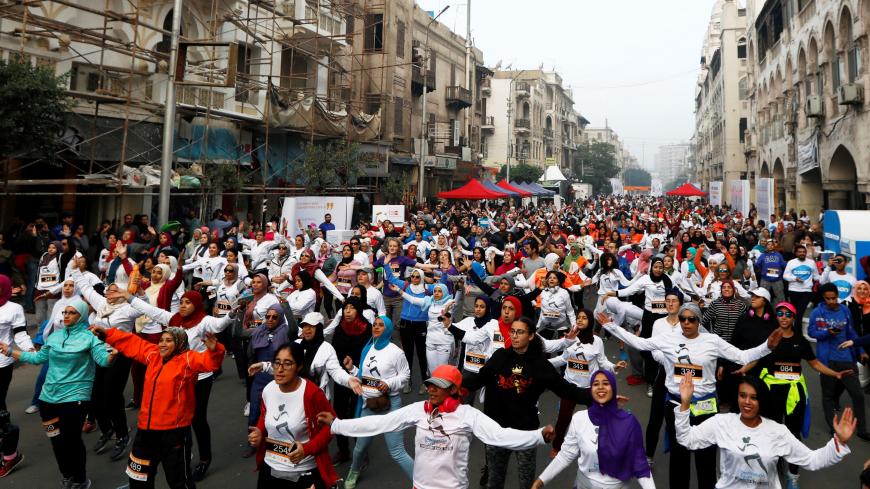 Egyptian women raise their arms before starting a race to raise awareness about violence against women, in the neighborhood of Heliopolis, Cairo, Egypt, Nov. 30, 2018. - REUTERS/Amr Abdallah Dalsh

CAIRO — March is truly a month for Egyptian women. While the world celebrates International Women's Day on March 8, Egyptian Women's Day falls on March 16, when women took to the streets in the first mass demonstration against British colonialism during the revolution of 1919.

Maya Morsy, the head of the National Council for Women, announced that a special event, "16 days of Egyptian Women: The Origins of the Tale," would kick off March 1 and continue until March 16 to commemorate 100 years of women's political struggle in Egypt.

The event will raise awareness of women's struggle regarding political and social issues through seminars, lectures and artistic presentations in coordination with the Ministry of Culture.

Although 100 years have passed since the revolution of 1919, women still struggle for equality. In parliament, quotas are in place that ensure women's presence, as stipulated in the 2014 constitution. Egyptian women are in need of a long-term strategy to offer empowerment on the political, social and economic levels. The National Council for Women announced such a strategy in 2017, with a vision toward 2030, which has garnered the support of President Abdel Fattah al-Sisi.

Nevertheless, why are so many measures in place to guarantee the participation of women in the political arena? One would think that 100 years of political struggle would be enough to guarantee women a presence without the need for special measures.

“The 1923 and 1930 constitutions prevented women from running [in the elections] and holding leadership positions," he said. "While the other constitutions provided for equality between men and women, [they did not provide for] an adequate representation of women, which the 2014 constitution [did].”

Atiq said that women are trained and prepared for leadership and parliamentary positions within political parties, but that these parties are vulnerable and ineffective.

“Between 1919 and 1953, the political parties were too preoccupied with their conflicts with each other and subsequent defections from the large parties," he said. "For instance, the Wafd Party, which was one of the largest parties at the time, witnessed three major defections.”

Atiq said that following the overthrow of King Fuad II in 1953, the "Egyptian regime dissolved all political parties and banned the establishment of new ones until 1971.”

He added, “Since 1971, Egypt has never had a serious partisan experience. The proof is that there are only 244 deputies in the current parliament who are affiliated with political parties. Over 100 political parties in Egypt won only around 43% of seats.”

“Decision-makers in Egypt did not focus on empowering women between 1919 and 1956, as they were too busy with Egypt's independence from the British occupation," he said. "They were then preoccupied with the defeat in the June 1967 war and with how to liberate the Sinai Peninsula from the Israeli occupation until 1973.”

Ghamri pointed out that between 2011 and the last quarter of 2015, Egypt did not elect any houses of parliament except for one in 2012 that was dissolved because of the unconstitutionality of the law governing its election. Over 10 governments were formed during that period, he said, which meant that the government's average duration was no more than six months, and decision-makers believed it was politically inappropriate to give priority to empower women.

Mervat Tallawy, former secretary-general of the National Council for Women and chairwoman of the Arab Women Organization, told Al-Monitor that religious and social reasons, not political ones, are behind the need for laws and strategies that empower women.

“According to social and cultural traditions, many Egyptians perceive women as unqualified to lead and represent the Egyptian people, especially in Upper Egypt and the countryside,” she said.

“This social and cultural misconception was even more deeply rooted with the rise of extremist Islamic movements, such as the Muslim Brotherhood and Salafist groups," she said, citing the establishment of the Muslim Brotherhood in 1928. She pointed to a decline in the Brotherhood after 1955, "when former Egyptian President Gamal Abdel Nasser captured the majority of the group's leaders after they attempted to assassinate him.”

Tallawy said extremist groups re-emerged in 1970, when Egyptian President Anwar Sadat pardoned many of their leaders and allowed them to return to political and social work. In 2013, the armed forces ousted Brotherhood-affiliated President Mohammed Morsi, following the June demonstrations against him. The state banned the group once more and prosecuted its leaders on charges of inciting and carrying out terrorist operations.

More women are in leading political positions than ever before in Egypt. There are 89 female members of parliament, the highest figure in Egyptian history, and eight women hold ministerial positions.

Tallawy praised the National Council for Women and Sisi for their efforts to empower women, though she said Egypt’s religious discourse and discriminatory cultural and social traditions against women need to be altered for the situation to truly change.

Atiq said that revamping political parties would be a real guarantee that women would be empowered.

Ghamri stressed the need to maintain political stability to allow a greater opportunity for empowerment.