US presence in northern Syria serves the Kurds, not Turkey

The US decision to keep 200 troops in northern Syria is a blow to Ankara. 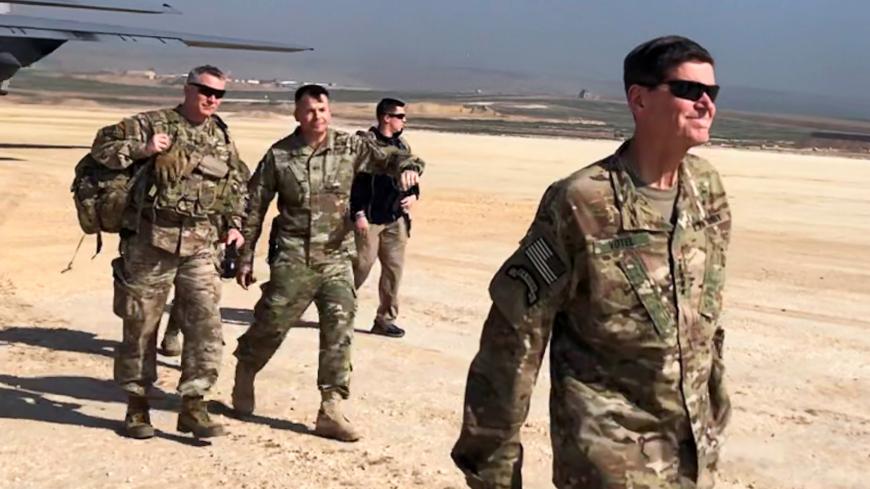 US Army Gen. Jospeh Votel, head of Central Command, visits an air base at an undisclosed location in northeast Syria, Feb. 18, 2019. - REUTERS/Phil Stewart

Nearly all Turkish media outlets cast Foreign Minister Mevlut Cavusoglu's statements about the S-400 missile deal with Russia as breaking news. It was. Following his talks with his American counterpart Mike Pompeo, Cavusoglu responded to questions from journalists on Turkey’s purchase of Russia’s S-400 missile defense system. "There is no need to explain anything about the S-400s since it is already a done deal,” he said, adding that Turkey would not break its agreement, and that "others’ commentary is not of interest to us.”

Likely the Americans. Turkish government mouthpiece Daily Sabah wrote: “US officials have threatened their NATO ally that purchasing the S-400 system could jeopardize Turkey's purchase of Lockheed Martin's F-35 fighter jets and possibly result in US sanctions. In multiple negotiation talks with a US delegation, Turkey has emphasized that it needs both the S-400 and Patriot systems.”

Ever since the Turkish government signed an agreement with Moscow in December 2017 to purchase the system, the issue has become an ongoing controversy between Ankara and Washington. The Russian missiles are expected to be delivered by the end of 2019. Yet Turkey is also part of the F-35 project, and the first delivery is expected by 2020.

Until recently, relations between Ankara and Washington seemed to be warming, which triggered speculations that Turkey may rescind its deal with Russia and go along with its ally, the United States.

If that's the case, what prompted Cavusoglu to be so blunt in calling the Russian missile sale a “done deal” while insinuating that American concerns do not bother Turkey?

The prime — if not the only — policymaker on such issues is President Recep Tayyip Erdogan, who increasingly expresses displeasure on the US position regarding northeastern Syria. As local elections approach, Erdogan is tirelessly spearheading his party's electoral campaign, delivering daily speeches across the country. In each speech, he emphasizes Turkey’s intention to establish a safe zone in northern Syria, adjacent to the shared border, some 30 to 40 kilometers deep. He wants to coordinate with the “allies,” meaning, the Americans, but if that is not possible (which seems to be the case) Turkey has the capability to enforce it on its own, he says.

Despite his well-known oratory skills and his intimidating discourse regarding northeastern Syria, President Erdogan is relaying a version of events that does not correspond to the facts. It is open to debate whether Turkey alone could control a safe zone in Syria without air cover. As long as the US military is present in Syria, it is unlikely that Turkey could undertake a military campaign to destroy the Kurdish presence with its Arab allies in the Syrian Democratic Forces.

Therefore, the American decision to leave 400 troops in Syria quickly sunk Turkey's aspirations for east of the Euphrates. President Erdogan’s daily speeches on Ankara’s disappointment with Washington's decision, and Cavusoglu's remarks on the “done deal” with Russia, should be understood accordingly.

The American decision to leave 400 troops in Syria, with only half to be stationed in the vast territory of northern Syria, has nothing to do with peacekeeping. Peacekeeping with 200 troops in the most volatile swath of territory on the entire globe is a sad joke. What is serious is that those 200 troops wear the uniform of the US military. Thus, the decision is a political one, with an explicit message: As long as US boots are on the ground in Syria, the area cannot be exclusively possessed by any party deemed unfit by the United States, whether it's Iran or the regime in Damascus. It is also an implicit message that the Americans do not want to see — at least at this stage — northeastern Syria within Russia’s sphere of influence.

Among all the parties involved in the Syrian imbroglio, Turkey has been the one with the avowed interest to step in, as it did in Afrin in January 2018. Erdogan committed himself to the eradication of the Kurdish People’s Protection Units (YPG) from the area, while readying for a Turkish incursion. To be deprived of his plans as election day approaches is no doubt a big nuisance for Erdogan.

In this sense, the Kurds of Syria are relieved by the American decision to stay. On the American side, striking a deal with Turkey on a buffer zone is unrealistic, as long as Turkey’s position vis-a-vis the Kurds is a zero-sum game. If Americans declare their presence a buffer zone between Turkey and Syrian Kurds, the beneficiaries will be the Kurds. It's the Kurds who were bewildered by the possibility of a Turkish invasion, which would lead to their uprooting, as happened about a year ago in Afrin.

The Americans can try to assuage Turkey — as they already are — by presenting the buffer zone as a safeguard for Turkey, which sees the Kurdish presence in northern Syria as an existential threat. But it is difficult to believe that the landlocked Kurds, who are struggling for survival, constitute a genuine cross-border threat to Turkey, in the physical sense.

That is why the American buffer zone works for the Kurds and not for Turkey. That is why Turkey is unnerved by the American decision to stay, as reflected in Cavusoglu’s statement. The Kurds, meanwhile, are not concealing their satisfaction. Kurds still believe it is possible the United States will sell them out, but this does not seem as imminent as it did right after Trump's announcement of US withdrawal in December 2018.

Did Trump backtrack from his decision? He refuses to say so, but he did. The Washington Post editorial headline from Feb. 22 is accurate: “The Trump administration reverses on a major strategic blunder in Syria.”

The American reversal on withdrawal would be less hurtful for Erdogan if he would see eye to eye on the future of Syria with Vladimir Putin and Hassan Rouhani, his Astana and Sochi partners. Russia’s Foreign Minister Sergey Lavrov suggested Feb. 24 that Russian military police be deployed in a proposed “safe zone” along Syria’s border with Turkey, though it is unlikely that his proposal will be implemented. Reuters interpreted Lavrov’s statement as "unlikely to appeal to Ankara, which is keen to set up the zone but has stressed it must be under Turkish control, with only its own forces deployed there. … Russia has said that Turkey had no right to set up the zone without seeking and receiving consent from Syrian President Bashar al-Assad.”

Lavrov, while acknowledging that Turkey’s security concerns are legitimate, did not conceal that Russia and Turkey disagree on policy regarding the Syrian Kurds. For Erdogan, they are terrorists connected to the outlawed Kurdistan Workers Party (PKK), but Russia and Iran do not see them that way.

The Russians are trying to persuade Turkey to compromise with Assad and recognize his right to re-establish his rule over the Syrian territories covered by Turkey.

Turkey is pressed between the American hammer and the Russian anvil in Syria. As long as it does not change its Kurdish obsession — almost an impossible choice given the authoritarian nationalist character of the Erdogan regime — Turkey’s Syrian prospects will remain uncertain, if not gloomy.