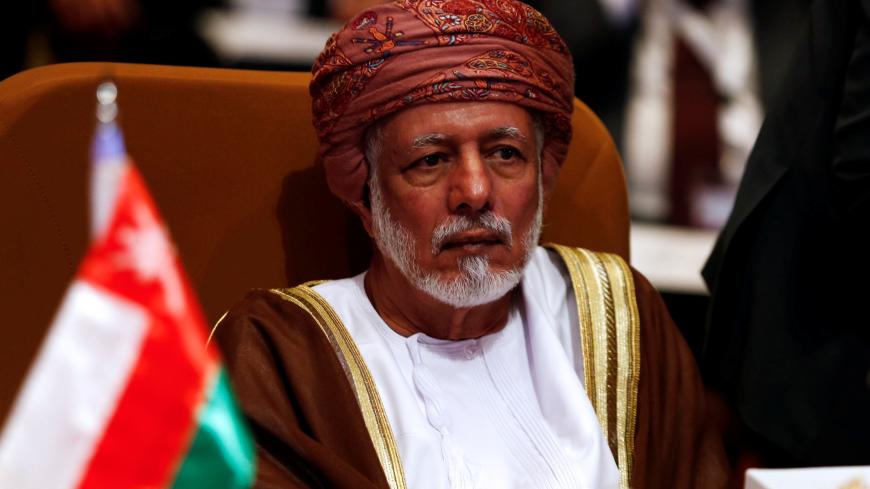 Lavrov and Alawi discussed the development of relations between Moscow and Muscat, as well as the coordination of conflict settlement across the Middle East. They focused, in particular, on the Palestinian-Israeli resolution process and the situations in Syria, Yemen and the Gulf region.

Moscow and Muscat have many points of convergence due to Oman’s efforts to conduct its foreign policy independently from international and regional powers. Oman has managed, to a large extent, to avoid controversies with Middle Eastern actors, as it often acts as a mediator between regional rivals.

Omani leaders have also grown increasingly concerned with Washington’s policies in the Middle East. Muscat is willing to consider alternatives to American security projects in the region if the United States and its main allies, Saudi Arabia and the United Arab Emirates, fail to revise their policies that Muscat deems — without describing them as such in public — destabilizing.

It is possible that the format of cooperation with Great Britain, Oman’s longtime partner, may also change. Given that Moscow’s engagement in the Middle East has significantly expanded since 2015, a new tone and framework has been set for the development of political contacts between Russia and Oman.

Aside from presenting an independent and multifaceted foreign policy, Muscat has also demonstrated its willingness to work with all Middle Eastern actors, including Israel. In October 2018, Israeli Prime Minister Benjamin Netanyahu visited Oman upon the invitation of Sultan Qaboos.

Yet Foreign Minister Alawi said on Monday that "there is no normalization of relations with Israel, but rather a diplomatic process aimed at finding a peaceful solution to the Palestinian problem."

He added, "The establishment of a sovereign Palestinian state is a condition for any normalization with the Israelis."

Lavrov said, “We are concerned about the atmosphere at the talks on the Middle East settlement. We see obvious attempts to revise the accepted international legal principles of the peace process in the Middle East. In light of these problems, it is extremely important for the Palestinians to show strength and responsibility in order to consolidate their forces. We are doing our best to facilitate this. In particular, we informed our Omani colleagues about last week’s consultations held in Moscow between the main Palestinian groups.”

Interestingly enough, Moscow is also eyeing Oman to possibly mediate Israeli-Iranian friction, though Lavrov and Alawi didn't dwell on this at the press conference.

Oman previously acted as a facilitator for the United States and Iran in their negotiations over the contents of a nuclear deal, hosting a number of meetings. Also, in spite of being a member of the Gulf Cooperation Council (GCC), Muscat has repeatedly participated in military exercises with Iran, all while being a member of a counterterrorism alliance with Saudi Arabia and other Sunni states. This is somewhat surprising, as Oman is officially an Ibadi state.

Moscow and Muscat also share common positions on the conflict in Yemen. Both nations maintain dialogue with all parties to the conflict. Oman has repeatedly provided negotiation venues to Yemeni factions. Its efforts may become necessary again, considering that the Stockholm agreements on Hodeidah ​face difficulties in implementation.

“We work with every political actor," Lavrov said, "requesting them to ignore the urges to exert military pressure on each other, encouraging them to come to the table and start the dialogue under the UN’s patronage."

Oman does not refrain from intervening in the Gulf's diplomatic crisis with Qatar. Muscat’s position on the matter has proven independent since the beginning of the crisis in 2017, when it refused to recall its ambassador from Doha or impose a blockade.

Oman's independent stances on Yemen and Qatar continue to provoke ambiguous reactions from Saudi Arabia and the UAE. For instance, the Arab Weekly reports that Yemeni sources have stated that Oman is not as neutral as it seems and actually supports the Houthis. The Saudis and Emiratis also unofficially yet regularly accuse Muscat of coordinating with Qatar against them.

Russian diplomatic sources who spoke to Al-Monitor said that despite these “frivolities” by Muscat, the leaders of Saudi Arabia and the UAE place their hopes on Oman’s chairmanship in the GCC. In particular, they expect Muscat will help normalize relations between Abu Dhabi, Riyadh and Doha.

Hence, the agenda for talks in Moscow included the future revival of dialogue between Russia and the GCC. Contacts between the GCC and Russia were suspended due to the split within the council itself, which virtually disintegrated after the second Qatar crisis. The GCC nations' positions toward the Syrian conflict also played a role. Oman’s leadership in the GCC will allow Russia to renew relations with the body, as Muscat will try to minimize the Qatar controversy's negative influence on the GCC.

Lavrov and Alawi also discussed the situation in Syria.

“We have a common stand on Syria," Lavrov said. "There is no alternative to UN Security Council Resolution 2254. It should be implemented without exception." Lavrov said he updated Alawi on the Feb. 14 talks in Sochi between Russia, Turkey and Iran, and that the outcome of that summit can be "facilitated by the normalization of Syria’s relations with the other Arab countries and its return to the Arab League."

Muscat’s policy on Syria reflects Russia’s approach in many ways. Oman maintained diplomatic ties with Damascus and avoided confrontation. At the same time, Oman recognized the opposition National Coalition as a legitimate representative of the Syrian people, clearing the way for mediation. However, Oman’s attempts to become a leading arbitrator between the regime and the opposition failed, in part because of the Russian military campaign in Syria, which dramatically altered the balance of power. Nevertheless, this approach and Muscat’s ability to reach compromises may be useful for a Syrian resolution in the future.

Lavrov and Alawi also discussed bilateral coordination in the global oil market. The sides emphasized the increase of trade between their countries. From January 2018 to November 2018, trade grew by 61.9% compared with the same period in 2017, amounting to $143.3 million. Moreover, transport projects are a major issue between the two countries. For example, ideas of a transport corridor extending from Oman to Iran through the Strait of Hormuz and farther on to Russia through the Caspian Sea have been floated. If implemented, it could attract investments from Oman into numerous joint projects in the North Caucasus region of Russia.

Furthermore, as discussed during the Moscow talks, facilitating the visa regime between Russia and Oman, or even abolishing it entirely, will become an impetus to the development of bilateral business contacts.