Iran’s Khamenei moves to usher in new generation of revolutionaries

Iran’s Supreme Leader Ayatollah Ali Khamenei’s vision of a “Second Step of the Revolution” has led to analysis about the youth role in its implementation. 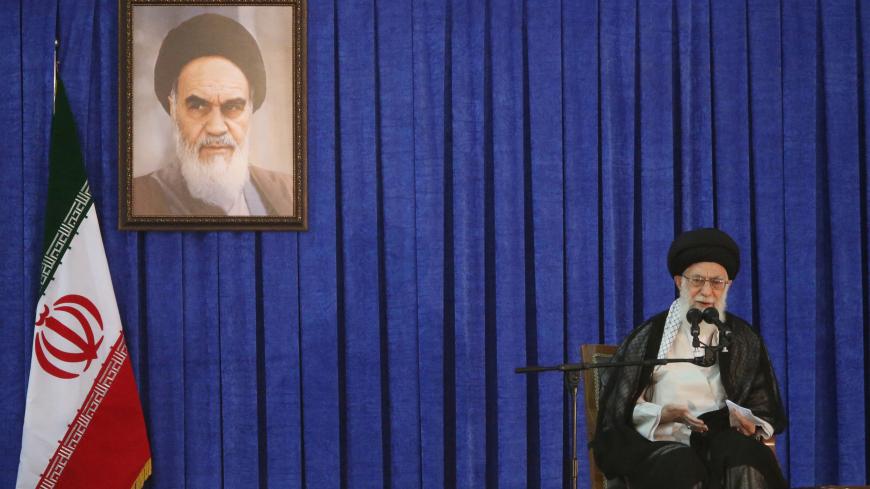 Iran's Supreme Leader Ayatollah Ali Khamenei delivers a speech during a ceremony marking the death anniversary of the founder of the Islamic Republic, Ayatollah Ruhollah Khomeini, in Tehran, Iran, June 4, 2017. - TIMA via REUTERS

When Iran's Supreme Leader Ayatollah Ali Khamenei, the final decision-maker on major matters of state, recently announced there would be a “second step” of the Islamic revolution, details were vague. However, on Feb. 11, Khamenei’s website published a comprehensive statement on the “second step.”

Accompanying the statement was an illustration of Khamenei taking a step forward while leading a group of engineers, scientists and athletes. The illustration went viral, as it contained only one cleric. Absent were the representations of the septuagenarian clerics who run most of Iran's major power centers. The group surrounding Khamenei was exclusively made up of young individuals.

Khamenei’s second step thus appears intended to usher in a new generation of revolutionaries committed to the principles of the 1979 Islamic Revolution. These youths will carry the torch of the revolution, as the clerics who overthrew the monarchy 40 years ago age. The statement on the second step contains 41 references to the “youth.” This prompted media discussion and analysis on the roles of youths, particularly among conservative media outlets, which typically are more keen to advertise statements by Khamenei.

“What’s clear about the overall statement of the ‘Second Step of the Revolution’ is that a major part of the stage of self-development [and] building society … is on the shoulders of the youths,” began an article in Javan online, which is believed to be close to the Islamic Revolutionary Guard Corps. Youths are responsible for “undertaking responsibility in the fields of politics, economy, culture and international [relations],” the article continued. It added that they have to “keep close to the ideals of the revolution in the arena of religion, morals, spirituality and justice.”

The statement, as most matters of this nature, is still devoid of major details. Rather, it is more of a blueprint and thus leaves much room for interpretation, which eventually may lead to Iran’s factions using their own interpretations to target each other.