The US administration and its regional allies' policies toward the Islamic Republic appear to be fueling a rise in nationalist sentiment in Iran. 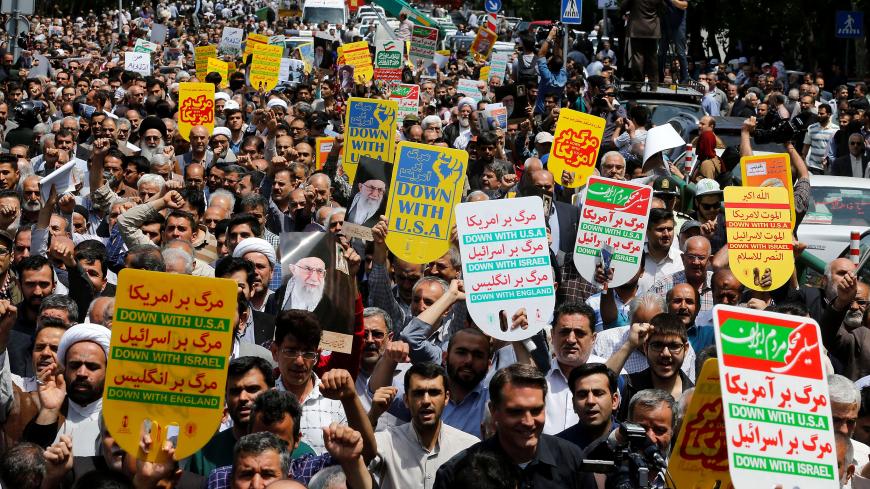 Iranians hold anti-US placards and shout slogans during a demonstration after Friday prayers in the capital, Tehran, May 11, 2018. - STR/AFP/Getty Images

In an apparent reaction to the policies of US President Donald Trump, Iran appears to be in the grip of rising nationalism amid signs of an effort to forge internal political reconciliation. Rather than solely seeking to topple the Islamic Republic, the United States and its regional allies are now perceived as pursuing the dismemberment of Iran.

Abdollah Ramezanzadeh, who previously served as government spokesman under Reformist President Mohammad Khatami, tweeted May 9, “[Saudi Crown Prince Mohammed] Bin Salman, [Israeli Prime Minister Benjamin] Netanyahu and Trump’s issue with Iran is beyond the political system. Their [problem] is a great country named Iran.” Ramezanzadeh, who is Kurdish, has long advocated for ethnic minority rights and was arrested in the aftermath of the disputed 2009 presidential elections.

But perhaps the most surprising reaction to Trump’s anti-Iran rhetoric in recent weeks has come from Ardeshir Zahedi, a high-ranking official of the ousted Pahlavi regime that was overthrown in 1979. Few would expect that a man who lost his position and influence with the rise of the Islamic Republic would venture to pay for the publication of an open letter in a New York Times' advertisement to defend the current Iranian state’s foreign policy.

Warning US Secretary of State Mike Pompeo over his threats against Tehran, Zahedi wrote May 25, "Cats will dream of mice ... Iran is not Iraq,” adding, “Through the millennia of its history, my country has never stooped or bowed to foreigners and has always remained united in the face of adversity. … Iran’s noble people always stand together and help defend their homeland. History has quickly taught foreign aggressors to abandon their wishful thinking of crushing Iran." Referring to Iran’s regional policies, Zahedi further emphasized, "What is not mentioned is that Iran is in Syria by the invitation of Syria, the legitimate government of a sovereign nation. It is the presence in Syria of secret armies from the US and other Western countries that violates international law."

The open letter quickly drew praise from Iranians of various political persuasions — notably including hard-liners — and made the front pages of newspapers in Iran.

In reaction to the letter, conservative historian Abdullah Shabazi wrote on his channel on the popular messaging app Telegram on June 3 that Zahedi has always been "independent" and that even under the toppled monarchy, he acted independently of the shah. Mohammad Reza Kaieni, the editor of the history section of Javan, a newspaper affiliated with the Islamic Revolutionary Guards Corps (IRGC), urged officials to invite Zahedi to Iran.

Within Iran, outspoken figures such as Sadegh Zibakalam, a prominent critic of the hard-line camp, have publicly stated a willingness to “pick up a gun” and go to the front lines to defend their country, driven by fear of a Syria-type scenario. Mostafa Tajzadeh, a prominent Reformist former political prisoner and longtime critic of Supreme Leader Ayatollah Ali Khamenei, tweeted Jan. 29, “Inattention to Trump, Netanyahu and Bin Salman’s project to turn Iran into Syria is not rational.” He called for “efforts to achieve freedom, justice and democracy and at the same time protect national independence, territorial integrity and the people’s security.”

Along with Trump's and Pompeo's remarks, more fuel for the upswing in nationalism in Iran may have come from the Saudi crown prince’s threat to “take the battle inside Iran” while hawks such as John Bolton, who has a warm relationship with the outlawed Mujahedeen-e Khalq, have been given prominent positions in the US administration.

Against this backdrop, an important point that should not be neglected is that an undeniable number of people who voted for moderate Hassan Rouhani in the 2013 and 2017 presidential elections cast their ballots less because of an interest in backing the political system and more out of concern about the rise of a hard-line candidate.

The joint US-Saudi-Israeli offensive against Iran appears to be forging political unity among Iranians. The threats seem to have fueled a tendency to support the country’s ballistic missile program as a symbol of national sovereignty and a necessity for survival. The political establishment in Iran also appears to be cautiously endeavoring to bring usually bitterly divided political factions in the country closer to each other. The attendees of Khamenei’s recent speeches is a case in point.

Those attending Khamenei's events are commonly invited by the office of the supreme leader. At Khamenei’s iftar ceremony May 23 were a surprising number of outspoken critics, including senior Reformist figures who were jailed in the aftermath of the 2009 presidential elections. Also there were Ali Shakuri-rad, the head of the Reformist National Unity party; Mohammad Atrianfar, a senior member of the Executives of Construction party; members of the Reformist Association of Combatant Clerics, whose views are close to late dissident Grand Ayatollah Hossein-Ali Montazeri; and several members of the administration of Reformist President Mohammad Khatami, including his previously jailed deputy Mohammad Ali Abtahi.

In a climate of external threat and a mood of national solidarity, all signs point to the Iranian political establishment finally moving toward healing wounds between factions that have been festering since the 2009 presidential vote. In this equation, renewed US hostility and a surge in nationalist sentiment may ultimately strengthen rather than weaken the Islamic Republic.