The penning of a letter to US President-elect Donald Trump by Iranian dissidents has led conservatives in Tehran to attack Reformists. 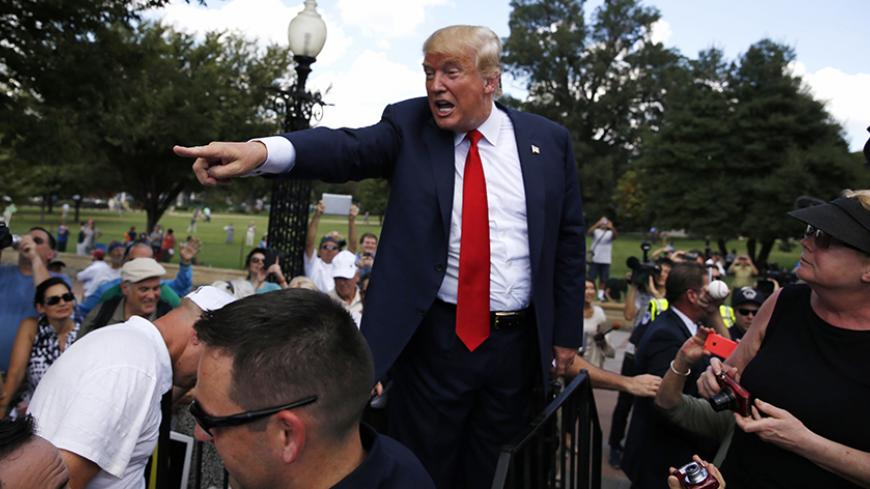 On Dec. 22, 30 exiled Iranian dissidents penned an open letter to US President-elect Donald Trump, urging him to impose fresh sanctions on “the Islamic Revolutionary Guard Corps and the supreme leader’s financial empire and direct the US Treasury to strongly enforce them.”

The dissidents further urged Trump to “form an international coalition to pressure the Islamic Republic of Iran and force the regime to cease its pursuit of long-range ballistic missiles.”

Describing the Islamic State (IS) and the Islamic Republic as two sides of the same coin, the dissidents added, “During the presidential campaign, we and millions of Iranians followed your forthright objection to the nuclear agreement reached between the Obama administration and the Islamic Republic of Iran. We sincerely hope that with your election, the new administration and the United States Congress will have the opportunity for the first time to review the regional and international outcomes of that disastrous agreement without any reservations, as was promised to the voters.”

Given that most Iranians in Iran welcome the lifting of sanctions under the July 14, 2015, Joint Comprehensive Plan of Action (JCPOA), the letter backfired, leading to serious criticism among both social media activists and politicians.

Iranian conservatives have used the letter to attack Reformists, referring to the signatories of the document as “Reformists living abroad.”

The hard-line Raja News wrote Dec. 25, “The reason behind the writing of this letter in 2016 and the behind-the-curtain pressures in 2009 [in the aftermath of Iran’s disputed presidential election] to apply more sanctions on the Iranian people by the foreign-based Reformists do not need any analysis, because doing business at the price of sanctions on the Iranian people and receiving financial aid to set up anti-Iranian media and sites are part of the projects that they have been engaged in during the past decade, and for sure, the decrease in sanctions against our country will take the bread out of their mouths.”

On Dec. 27, under the headline “30 Traitors,” conservative Sobh-e-No newspaper described the authors of the letter as “the same supporters and active directors of the 2009 protests.” Of note, the disputed presidential election that year led to widespread unrest.

Meanwhile, Reformists have in turn slammed conservatives for linking the exiled dissidents to their camp. They further argue that their hard-liner foes and the signatories to the letter are equally damaging Iran.

Abdolvahed Mousavi Lari, who served as interior minister under former Reformist President Mohammad Khatami, said Dec. 26, “The action of these 30 individuals was [designed] to help the 'worried ones' current. Reformists assess the JCPOA as a diplomatic action that is supposed to help solve problems, but those abroad who seek to cause trouble for the country, and these 30 individuals’ efforts, are [carried out] in order to portray the JCPOA as ineffective, just like what the 'worried ones' are doing inside the country.”

Of note, the term "worried ones" refers to a group of hard-liners who vehemently opposed the nuclear negotiations between Iran and the six world powers between 2013 and 2015 and also the landmark accord that the talks produced.

Mousavi Lari added, “Thus, the ‘worried ones’ current, which is opposed to the government and questions the JCPOA, should be careful not to join the traitors based abroad.”

Moreover, prominent Reformist Abdullah Ramezanzadeh, who served as government spokesman under Khatami, said Dec. 26, “The action of these 30 individuals is nothing but treason. … Right now, the people based abroad who seek an overthrow [of the Islamic Republic] and the ‘worried ones’ are … moving to damage Iran.”

According to Kalame, the official news site of opposition leader Mir Hossein Mousavi (who has been under house arrest since 2011), more than 300 social and civil activists have released a statement describing the letter of the 30 dissidents as "anti-national and shameful."

Furthermore, describing the letter as “pathetic and full of gaffes," Hamid Reza Jalaeipour, a prominent professor of sociology at Tehran University and a member of the central council of the dissolved Reformist Islamic Iran Participation Front, also wrote on his Telegram channel Dec. 26, “I am a Reformist and know democracy is the path to save Iran, and I do not hesitate to [engage in] any kind of civil and legal activity and go to jail for this cause. But if Iran and the lives and security of Iranians are put in danger, I will go to battle under the command of [Supreme Leader] Ayatollah [Ali] Khamenei.”