A prominent Iranian hard-liner accused Foreign Minister Mohammad Javad Zarif of being an American spy as anger toward the US and the Rouhani administration heats up. 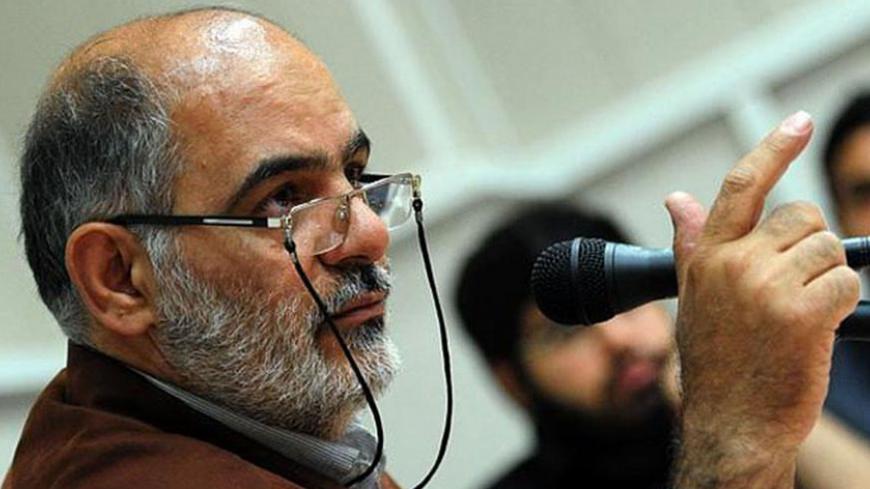 Iranian hard-liners have piled pressure on President Hassan Rouhani's administration in recent weeks, especially on Foreign Minister Mohammad Javad Zarif, who led Iran’s nuclear negotiating team. After the recent move by the US Congress to renew sanctions on Iran, one prominent Iranian extremist went so far as to call Zarif an American spy.

The US House of Representatives voted to renew the Iran Sanctions Act on Nov. 15, and the Senate approved a 10-year extension of the act on Dec. 1. President Barack Obama is expected to approve the measure. Iranian politicians and lawmakers have in past days argued that the extension of US sanctions violates the July 2015 Joint Comprehensive Plan of Action (JCPOA). In this vein, Rouhani, in a Dec. 4 address before the Iranian parliament, condemned the US renewal of the Iran Sanctions Act.

On Dec. 3, Hossein Allahkaram, the head of the coordination council of Ansar-e Hezbollah, a semi-official paramilitary organization, alluded to Iran’s foreign minister being a US spy. On his official Instagram page, Allahkaram wrote, “Some believe that [Zarif’s] exceptional ties with American intelligence entities are undeniable. … Reuters had reported that the phone numbers of American politicians and intelligence officials, such as [Vice President] Joe Biden and [former Secretary of Defense] Chuck Hagel, are saved in Zarif’s cellphone, which [Zarif] hurriedly denied.” Allahkaram’s post continued, “Interestingly, [Russian President Vladimir] Putin, in a secret meeting with a high-ranking [Iranian] official, said that ‘according to our information, Zarif is an American agent.’”

Though the reasons for what happened next remain unclear — with some speculating that the Office of the Supreme Leader directly chastised Allahkaram — he subsequently did a U-turn and edited the Instagram post to remove the espionage allegation against Zarif and apologized for “any misunderstanding [he] might have caused.” Yet a screenshot of his original post was widely shared by Iranian social media users, especially on Twitter. One user tweeted, “Is it not a crime to [falsely] accuse [the] FM? Mr. Prosecutor, you have again showed favoritism.”

Allahkaram is known in Iran for extremism and controversy. In a reaction to his post about Zarif on Instagram, the conservative Sobh-e No daily introduced Allahkaram in a Dec. 4 article as “one of the most active figures of Hezbollah, who, with his bunch, was called ‘the pressure group’ or ‘plainclothes’ by the Reformist administration [of former President Mohammad Khatami].”

According to Sobh-e No, Reformists also accused Allahkaram of “playing a role in the attack on Tehran University's student dormitory in 1999; the violent demonstration in front of Qods Cinema [in opposition to the screening of a controversial Iranian movie] in 1996; the incident of Khorramabad Airport being surrounded [by paramilitary forces to prevent Reformist figures from joining a conference in the western city of Khorramabad] in 2000; and many other political convulsions.”

The Reformist Aftab-e Yazd daily also reacted to Allahkaram’s accusations against Zarif on the front page of its Dec. 4 edition. Under the headline “To Kill Zarif,” the article began: “Apparently, these days — more than any other time — [Zarif] should listen and be tolerant; he should gentlemanly and pay no attention to accusations, to being named a traitor and, most recently, to being called a spy. However, he is used to all these swear words.”

The daily compared Zarif to prominent figures in Iranian mythology, such as Arash Kamangir, and historic political figures, such as Amir Kabir and Mohammad Mossadegh, who are widely hailed for their efforts to fight foreign domination throughout Iran's history. Aftab-e Yazd added, “Since the nuclear deal was reached, the ‘worried ones’ [the hard-liners opposed to the JCPOA] have been waiting for a suitable excuse to attack Zarif. … What better excuse than the 10-year extension of the Iran Sanctions Act? Now is the perfect moment to say that the Iranian national hero is an American spy.”