The popularity of Iran's Foreign Minister Mohammad Javad Zarif has peaked on social and Reformist traditional media with the announcement of the nuclear deal. 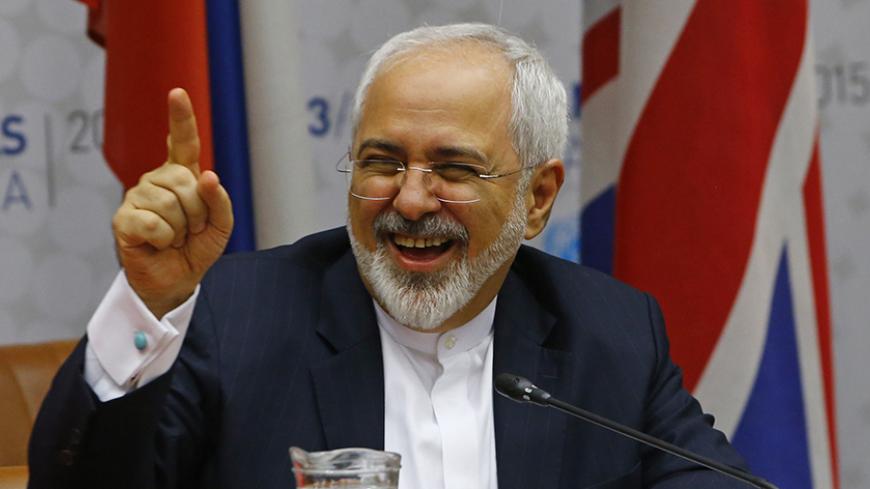 Nearly 20 months of intense negotiations between Iran and the five permanent members of the UN Security Council plus Germany have finally resulted in a historic agreement to reduce Iran’s nuclear program in exchange for sanctions relief. Iranians watched the final days of these talks as intensely as others watch their countries compete in the World Cup. The decadelong nuclear dispute that resulted in Iranians becoming more isolated as sanctions slowly chipped away at their earnings, as President Hassan Rouhani put it July 14 after the deal was announced, impacted Iranian lives harder than the nuclear program.

It makes sense, then, that Foreign Minister Mohammad Javad Zarif, the man tasked with ending this crisis by negotiating directly with Iran’s largest and most powerful enemy, the United States, would be hailed as a hero by Iranians. Those eager to see their financial lives improved and to see 36 years of tensions with the “Great Satan” greatly reduced have rejoiced.

Many Iranians taken to Twitter, tweeting #IranWinsPeace in praise of the country’s diplomatic efforts to end a crisis that some feared could only end in war. One popular tweet came from Iranian journalist Rasoul Majidi, who recalled that Zarif was also one of the main negotiators involved in ending the Iran-Iraq War, which devastated the country economically. Another Iranian journalist, Mohammad Eslami, who covered the talks in Vienna, tweeted that he will tell his grandchildren about the day of the agreement.

Iranian praise of Zarif’s efforts over these past 20 months has not been confined to social media. Iran’s Reformist media outlets have contributed to a level of myth-making around the Western-educated minister not seen in many years, with comparisons to Iran’s nationalist Prime Minister Mohammed Mossadegh, who was overthrown in a Western-backed coup; the mythical archer Arash, who mapped the Persian empire’s borders with his bow and arrow; and even Amir Kabir, who attempted to modernize the country under the Qajars.

Amir Kabir is remembered in Iran as a prime minister who tried to modernize the country in the mid-19th century. His efforts earned him the scorn of political rivals and colonial powers alike and he was eventually demoted and later executed by Nasir al-Din Shah. Reformist newspaper Aftab-e Yazd likened Zarif to Amir Kabir by placing his famous hat on Zarif’s head in a front-page picture. Interestingly, the head of Iran’s Expediency Council, Ayatollah Hashemi Rafsanjani, has attempted to liken himself to Amir Kabir as well.

The Aftab-e Yazd article, headlined “The Amir Kabir of our time,” published on the eve of the announcement, declared that whether there is a nuclear deal or not, “Zarif’s place is close to the people in Iran.” Just as Amir Kabir faced hostility for his reforms, it read, Zarif faces hostility from the “merchants of sanctions” — those who profited from sanctions on Iran. The article conceded that while the two characters may not be exactly the same, there are noteworthy comparisons and that everyone should “stand and raise their hats for Zarif.”

Ghanoon's front page depicted Zarif dressed as a historical archer, pulling back an arrow on his bow with a map of ancient Persia behind him. The article by Maryam Ghorbanifar, “From Arash to Zarif,” explained how after a dispute, the archer Arash was able to create Iran’s borders with an arrow that flew from early morning to night. Ghorbanifar continued, “This time, instead of a bow and arrow, it is the turn of pens, notebooks, iPads and tablets,” and instead of “geographical borders,” the dispute is over “the borders of national interests.”

Though the comparisons may be found lacking in many respects and have been criticized by conservative media outlets, they serve to illustrate the soaring popularity of a foreign minister who has worked to bring his country out of economic isolation and who may improve the lives of millions of Iranians.