Iranian President Hassan Rouhani has embarked on a European tour for talks expected to revolve around the nuclear deal. 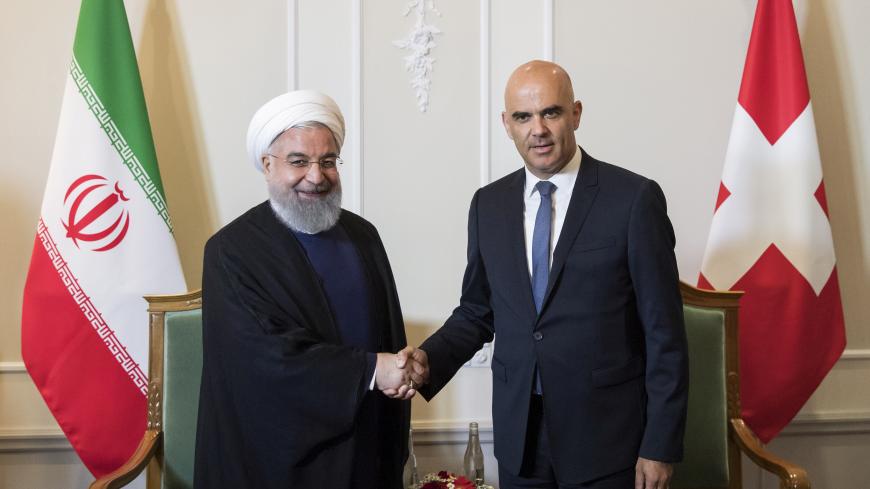 Iranian President Hassan Rouhani is in Switzerland as part of a European tour that will take him to Austria for negotiations centered on the Joint Comprehensive Plan of Action (JCPOA). The visit comes as Tehran is already feeling the pinch after Washington’s withdrawal from the nuclear deal and is awaiting proposals from the European signatories on how to keep the agreement alive.

Back at home, the visit hit the headlines in leading papers. “Negotiating the JCPOA in the heart of Europe,” read Bahar, a Reformist paper but also an occasional critic of Rouhani’s policies. An article on the Iran website, the official voice of the administration, highlighted Swiss President Alain Berset’s Persian-language tweet about the visit and that he welcomed Rouhani at Bern Airport. The gesture by Berset was also reflected in a Twitter post by Rouhani adviser Hessamoddin Ashna: “The Swiss president received the Iranian counterpart at the airport in person, [thus] transmitting to the world the Europeans’ message of respect for Iranians.”

“There is no doubt that Rouhani will make it clear to the Europeans that to stay in the deal and defend the European Union’s independence in the face of Donald Trump, they need to demonstrate more valor,” wrote Arman, another Reformist daily. According to the same analysis, worries about US banking sanctions on Iran could be alleviated if Swiss banks maintain their independent policies as they have done traditionally.

However, hard-line dailies such as Javan, Kayhan and Vatan-e-Emrooz were not interested in the latest initiative to forge diplomatic engagement. As merciless critics of the Rouhani administration and his foreign policy, they rather decided to look the other way. Hard-liners have long been cynical of Europe, promoting the notion that it is not a reliable partner and will not sacrifice business with Washington for the sake of the nuclear deal.

Meanwhile, another episode of Iran’s fresh round of diplomacy has taken place in Muscat. Before departing for Europe along with Rouhani, Iran’s top diplomat Mohammad Javad Zarif was in the Omani capital, where he sat down with his counterpart, Yusuf bin Alawi. Oman’s longtime leader, Sultan Qaboos bin Said al Said, has for decades enjoyed close ties with the Iranians and has proven an effective deal broker.

“The Reliable Savior” is how the pro-Reform Ghanoon daily described the Omani side, reminding readers that it was Muscat that hosted secret pre-JCPOA US-Iran engagements during the Obama administration. “Under the current critical circumstances, Zarif’s Oman trip was extremely important. It seems that secret messages to the other sides topped the agenda.” The article praises Oman as a country that does not put its own interests first in mediation efforts.

Digging into both trips, the pro-Rouhani paper Aftab explored the prospects that the nuclear deal could face after the fresh round of diplomacy. “Zarif’s one-day visit [to Muscat] seems to have touched upon issues beyond bilateral and regional ties. There is no doubt that Oman will once again prove its goodwill about Iran as a mediator. It is said that Muscat is pushing to bridge the JCPOA gaps by bringing all the sides around the negotiating table.” The editorial then wonders if the new diplomatic efforts could herald “good news” for Iran.