The Iranian president’s planned trip to New York to attend the UN General Assembly is sparking divisions among his political backers and opponents. 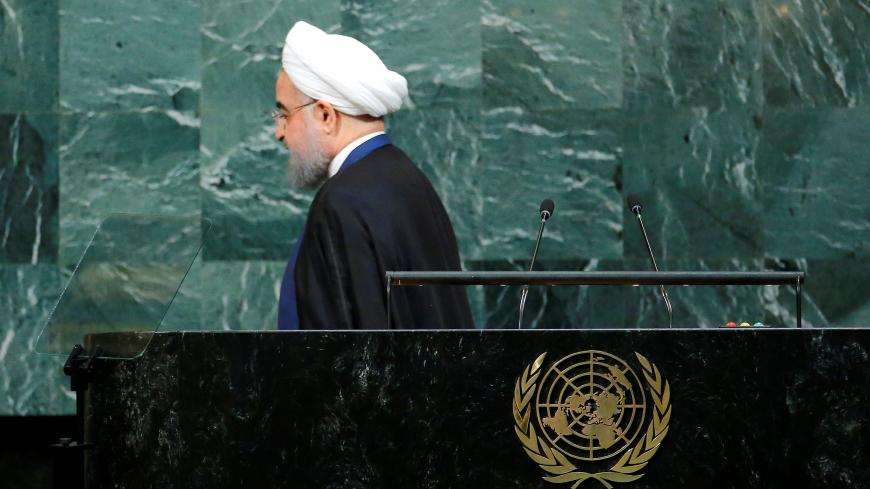 Whether Iran's President Hassan Rouhani should travel to New York for this year's UN General Assembly is fueling a war of words between his critics and supporters.

Hard-line daily Kayhan initially sparked the debate. In a Sept. 10 editorial, the paper advised Rouhani to cancel his trip to New York in order to use it as a chance to humiliate his US counterpart, Donald Trump. "Since the United States has spared no opportunity for hostility against Iran, President Rouhani needs to refrain from attending the General Assembly as an official protest over Trump's chairmanship [of an agenda item] at the Security Council," said the editorial.

According to Kayhan, such a decision could be a "tooth-breaking response to Trump's incessant insults against the Islamic Republic and the Iranian nation." Kayhan further downplayed Rouhani's previous trips to New York as bearing no fruit, implying that Iran will lose nothing by refusing to participate.

The paper's argument drew its first reaction from a top Rouhani adviser. In a chain of tweets, Hesamoddin Ashna fired back by describing Kayhan as a representative of a small but powerful camp that keeps saying "no to diplomacy." Ashna insisted that Rouhani’s trip to New York could be productive if he pursues a useful diplomatic approach. "He [Rouhani] is not a person who would make trips for the sake of traveling," Ashna said.

In another reaction, Behrouz Nemati, spokesman for the Iranian parliament's presiding board, reminded Rouhani "to act with rationality and disregard baseless and emotional remarks … and attend the UN General Assembly to send the Iranian people's message of peace and friendship to the entire world."

The newsstands on Sept. 12 still bore signs that the debate is far from over. Arman, a pro-Rouhani daily, noted that Trump would prefer that the Iranian president cancel the visit in order for him to become the lone speaker at the Security Council session, which he will address. "There is no doubt that Rouhani's presence and a speech from a position of authority and dignity will be of considerable help to Iran to push its agenda," reported Arman.

Reformist daily Ebtekar took a similar line of support. "Rouhani's failure to attend will be condoned as his refusal to face questions and diplomatic challenges," the daily wrote.

"Whether to go or not to go is not the question," the pro-Reform Etemad's headline read. Launching a diatribe against those who seek to keep Rouhani at home, the paper said, "They should be aware that Rouhani's non-attendance [at the UN General Assembly] will only tarnish Iran's diplomatic image."

Rouhani's visit to New York has already been finalized and officially announced by his chief of staff, Mahmoud Vaezi. But pressure from hard-liners on how Rouhani should proceed will certainly not stop before he takes off for the United States. A clear message was sent to him earlier this month from Ahmad Jannati — the powerful chairman of the Assembly of Experts who also heads the Guardian Council — who warned the president to bear in mind the supreme leader's warning that no one from the Iranian delegation is allowed to negotiate with the United States.