The Iranian president's UN speech was widely hailed as a triumph against his US counterpart, but it seems to have done little to slow the national currency's sharp devaluation. 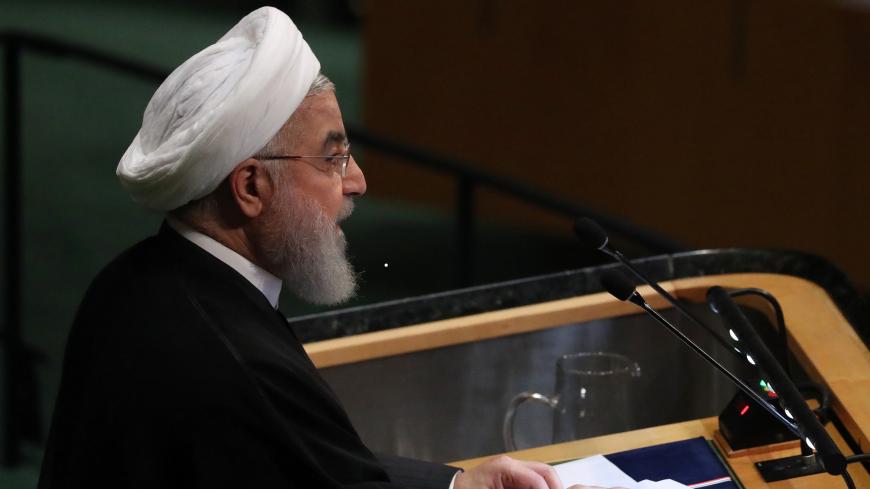 After ups and downs and weeks of debate between critics and supporters of the Iranian president over whether he should attend this year's UN General Assembly meeting, Hassan Rouhani delivered his speech in New York on Sept. 25. Both sides now seem to be applauding his performance.

At the newsstands, the general coverage by Iranian papers was a standing ovation for the president, with each side picking the right angle for their target audience.

Putting pictures of US President Trump and Rouhani side by side, the Reformist daily Shargh focused on the reciprocal nature of talks based on justice and equality as raised by the Iranian president. Some other moderate papers such as Arman highlighted Rouhani's proposal that he is ready to immediately start talks, and Donya-e-Eghtesad featured Rouhani inviting Washington back to "the negotiating table that it turned upside down."

Etemad, another pro-reform paper, lauded Rouhani for defending Iran based on a discourse of dignity and wisdom and "speaking in moderation as a peace-seeking politician, despite pressure at home from hard-liners" to make him do the opposite.

In an editorial published by the government’s official daily Iran, former diplomat Hamid Reza Asefi drew an analogy between the speech made by Rouhani and that of his American counterpart. "While Trump sought to undermine international organizations and pushed to make decisions for other countries … the Iranian president made a speech that was balanced, comprehensive … and against unilateralism and bullying policies."

Even Kayhan, the leading hard-line paper that earlier went the extra mile to persuade Rouhani to cancel the New York visit, joined the chorus. The same line was pursued by Javan, which is affiliated with the Islamic Revolution Guards Corps. The paper quoted Rouhani on its front page: "The US policy of unilateral sanctions against Iran is economic terrorism."

On social media, however, there was not only delight. Moderate political commentator and university professor Sadegh Zibakalam lamented the Rouhani speech. While praising Rouhani for his emphasis on the rights of nations, former conservative lawmaker Alireza Zakani wished that the president had told the United States that "it can no longer implement its threats … because there will be no war, nor any negotiation," making reference to earlier remarks by the supreme leader, Ayatollah Ali Khamenei.

France-based religious scholar Mohammad Javad Akbarin described the speech as precise, coherent and diplomatic in the true sense of the word, but reminded Rouhani that when he comes home he should live up to his own words about the importance of "sticking to one's promises and consulting with the elites."

There were more negative reactions on Twitter, such as, "Trump praised his own government and everyone burst into laughter. Then how do our officials expect us not to laugh our heads off when they claim they served the nation in the past 40 years?"

On the economic front, Iranians woke up hours after Rouhani's speech to a fresh record of their national currency's collapse. On the free market, one dollar was exchanged for close to 190,000 rials, marking an over 11% drop for the Iranian currency in one day alone.

Mostafa Tajzadeh, a Rouhani supporter and prominent Reformist figure, praised Rouhani's speech as "a political victory," but noted that the president had been "defeated by the dollar," saying, "The free fall of the rial continues to harden life for the poor and the low-income layers of the society."