Why Iran's conservatives are suddenly rooting for Rouhani's VP

First Vice President Eshaq Jahangiri’s strong performance in the first Iranian presidential debate has led conservatives to speculate about the prospect of him challenging President Hassan Rouhani. What is the real aim of this unlikely depiction? 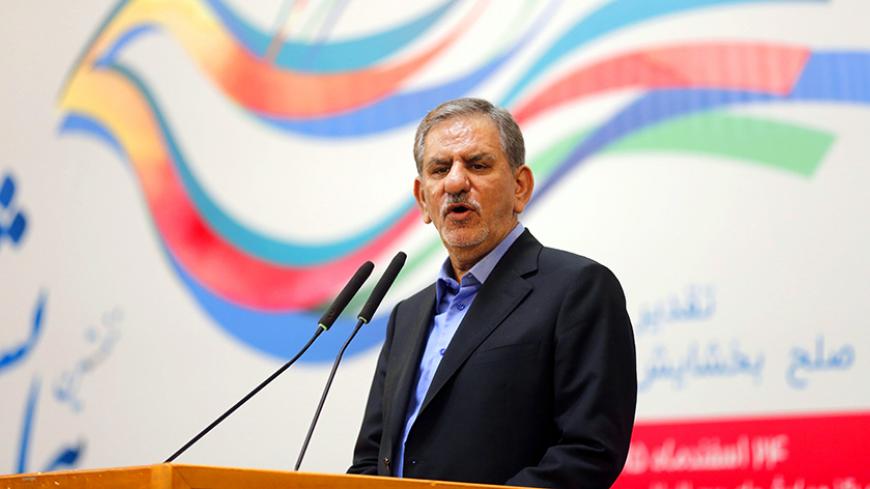 Iranian First Vice President Eshaq Jahangiri speaks during a ceremony in which charitable donors pay off the debts of “mehrieh” prisoners as a show of Islamic charity, Tehran, Iran, March 14, 2017. - ATTA KENARE/AFP/Getty Images

Two days after the first round of Iran’s presidential debates on April 28, an online poll indicated that First Vice President Eshaq Jahangiri attracted national attention, taking a lead over his fellow competitor, incumbent Hassan Rouhani, who is running for a second term.

Jahangiri’s booming popularity is widely attributed to his attacks against Mohammad Bagher Ghalibaf, a conservative candidate, who has been Tehran’s mayor since 2005. Ghalibaf, who is running for president for the third time in 12 years, was criticized during the debate over his management of Tehran municipality and his hard-line political approach.

According to the online poll, conducted by Tabnak news website and republished by Aftab Online on April 30, 42% of respondents believe Jahangiri took the most advantage of the debate. About 34% said Rouhani was the best, while 15% voiced support for Ghalibaf. Other candidates, including Ebrahim Raisi, the custodian of the holy shrine of the eighth Shiite Imam and believed to be favored by the supreme leader; Mostafa Mirsalim, representing the conservative Islamic Coalition Party; and Mostafa Hashemi-Taba, a marginal pro-Reform competitor got the least attention from the public, the poll showed.

During the debate, Jahangiri introduced himself as a “representative” of the Reformists, a political camp largely silenced after the disputed 2009 presidential elections. He lashed out at Ghalibaf for labeling him as a cover candidate for Rouhani. His remarks in support of the Reformists made hard-liners launch a media campaign to foist him as the main candidate of the Reformists. Hossein Shariatmadari, the managing editor of the hard-line newspaper Kayhan, claimed in an interview with Fars News Agency on April 30 that the Reformist leadership would be shifting from Rouhani to Jahangiri in the days running up to the May 19 vote.

The Supreme Reformist Council for Policymaking immediately reacted to the conservative claims, announcing that Rouhani will remain their “main” candidate in the upcoming elections. Abdolvahed Mousavi Lari, the deputy head of the Reformist Council, said the body has “no intention to make any change in its policy.” He insisted that Jahangiri’s decision to run for president was made by consensus within Rouhani’s team and that his presence in the debates will be aimed at highlighting the demands of Reformist groups.

Some observers believe that the conservatives have made their claims about Jahangiri to sow division among Reformists. But there are signs that they are pursuing another strategic goal. The hard-liners know they have little chance to win this year’s election. Thus they may be after replacing Rouhani, whose stances have repeatedly been criticized by Supreme Leader Ayatollah Ali Khamenei, with Jahangiri, a politician who ultraconservatives believe would take a softer position against them. In other words, Jahangiri might be a pro-Reform candidate who can be managed more easily.

The potential selection of Jahangiri as an alternative to Rouhani is not a new idea. Conservatives have been discussing this prospect for months. In November, a person with close ties to the right-wing parties told Al-Monitor that Jahangiri could be a “preferred candidate” if a conservative candidate has no chance of winning the vote. “It depends on how [Khamenei] predicts his own health conditions,” the person, who spoke on condition of anonymity, said in a reference to Khamenei’s alleged prostate disease. He was implying that the supreme leader prefers Jahangiri to be in office in case his health conditions get worse in the next few years.

Khamenei has repeatedly shown his dissatisfaction with Rouhani’s political and economic approach. In the latest case, Khamenei criticized Rouhani for highlighting the nuclear deal he signed with six world powers as a big achievement, Kayhan reported on April 30. Khamenei said it is not correct that “some officials say since they took office the shadow of war has been faded away.” His comments were a clear reaction to Rouhani’s recent campaign speech in the city of Yazd, where he had defended the nuclear deal as effective in preventing war and sanctions.

For observers who have kept a close eye on the Rouhani-Khamenei relationship in the past four years, it’s clear that the supreme leader does not favor Rouhani in this year’s election. Khamenei already agreed in a meeting with Jahangiri that the vice president can play a mediator role between him and the Reformists, whose relationship with Khamenei got tarnished after the 2009 unrest. Jahangiri told Rahe Nou website earlier in March that he had met with Khamenei to see how they could re-open a “communication channel” between the Reformist camp and the supreme leader.

Another key point that shows why hard-liners are trying to highlight Jahangiri’s role is that he is the head of the Resistance Economy Command Headquarters, which was formed after Khamenei’s call for greater focus on domestic economic capabilities in 2015. As the economy has been a major concern of the supreme leader, a candidate already involved in economic policymaking has an added value — though there is no sign yet of Jahangiri’s level of comfort with the role conservatives have defined for him.

Hard-liners are expected to step up their efforts to marginalize Rouhani in the coming days, but the final word comes, as before, from the spiritual leader of the Reformists, former President Mohammad Khatami — a politician who has several times tipped the scales in favor of particular candidates in the final run-up to presidential votes. The restrictions imposed on Khatami in recent years have boosted his popularity among millions of young voters who desire major reforms in the country. His stated support of Rouhani on May 2 put an end to the noisy campaign against the moderate president. In a note on his own website, Khatami urged his followers to stand by Jahangiri by voting for President Rouhani, saying that the incumbent’s re-election is “in the interest of the country” and warning that his defeat will lead to the “return of sanctions and isolation” to Iran.