Who was the winner of Iran’s first presidential debate?

While the first round of Iran’s first presidential debates this year was supposed to be about social issues, it quickly turned into a battle on the economy and politics. 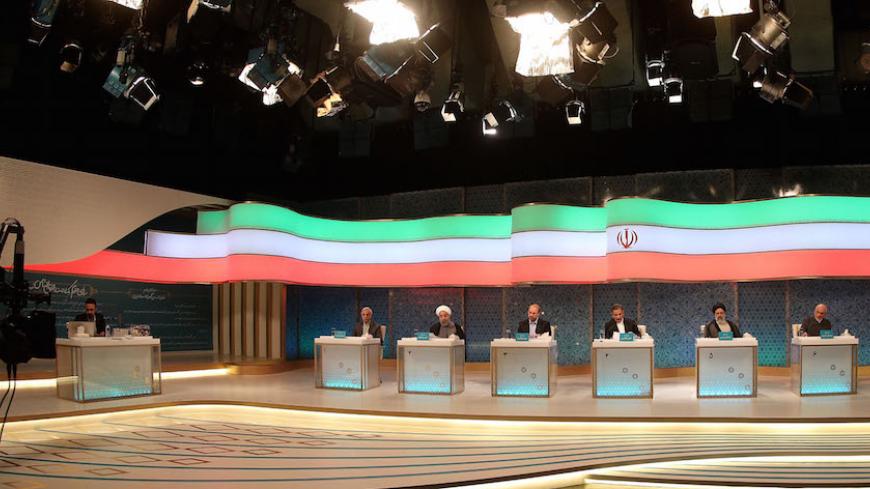 On April 28, Iranians tuned into state television’s Channel 1 to watch the first round of presidential debates — a forum that greatly shapes voter sentiments.

Incumbent President Hassan Rouhani, First Vice President Eshaq Jahangiri and Mostafa Hashemi-Taba, a former minister of industries and mines, are the candidates of the Reformist-moderate camp. On the other side of the political spectrum, the conservatives are represented by Ebrahim Raisi, the custodian of the holy shrine of the eighth Shiite imam, Tehran Mayor Mohammad Bagher Ghalibaf and Mostafa Mirsalim, a former minister of culture and Islamic guidance.

The first televised debate was supposed to be about social issues, but quickly turned into a highly political battle over the economy. The clash began when Rouhani was to make his address, and Ghalibaf — who was defeated by Rouhani in the 2013 presidential elections — claimed that the incumbent had previously promised that he would create 4 million jobs. Rouhani quickly denied this and interrupted Ghalibaf by saying, “I do not want this lie to continue and do not want Mr. Ghalibaf’s sins to increase.”

During the debate, Iranian news sites and channels on the popular smartphone app Telegram were highly active, and engaging in real-time fact-checking. As such, the moment Ghalibaf spoke of Rouhani’s alleged promise, the statement in question was quickly circulated, showing that Rouhani had before the 2013 elections said that 4 million jobs could be created — if the country’s tourism industry boomed and 10 million tourists could be attracted to Iran.

This wasn’t the only time in which Rouhani and Ghalibaf tensely traded barbs during the debate. Another important showdown was when Ghalibaf accused Rouhani of deceiving people through the candidacy of Jahangiri, who is widely assumed to have signed up to run to aid Rouhani during the debates and then withdraw in favor of the incumbent.

Ghalibaf seemingly did not expect Jahangiri to counter him seriously. Instead, the Tehran mayor found himself coming under fire by the vice president, with Jahangiri saying that the man behind the attack on the Saudi Embassy in January 2016, which led to the severing of ties between Iran and Saudi Arabia, is seemingly working for Ghalibaf.

“Which people were behind the attack on Saudi Arabia’s Embassy? … We [Rouhani administration] did not attack the embassy and put people’s interests at risk. For which candidate are those who attacked the embassy working for? Who gave the money [for the embassy attack] and supported them?” Jahangiri unexpectedly thundered during the debate.

Jahangiri’s charge did not stop Ghalibaf from launching further attacks on the Rouhani administration. In the last minutes of the debate, the Tehran mayor curiously appeared to both imitate former hard-line President Mahmoud Ahmadinejad (2005-13) and the latter’s Reformist rival in the 2009 elections, Mir Hossein Mousavi, who has been under house arrest since 2011.

During the controversial presidential debates in 2009, Ahmadinejad famously brought up a document on the air, claiming that Mousavi’s wife, academic Zahra Rahnavard, held two illegal degrees — a claim that was later denied by the Inspection Organization. In direct response to Ahmadinejad, Mousavi minutes later addressed the Iranian people on TV, saying, “We are facing a phenomenon who stares in your eyes and lies.”

Eight years later, in the April 28 presidential debate, Ghalibaf seemingly imitated Ahmadinejad’s tactic to discredit Rouhani by showing a printed screenshot of the president’s remarks published on his website about creating 4 million jobs, and seemingly repeated Mousavi’s aforementioned famous statement to attract some of the Reformist’s supporters. However, this does not appear to have worked out very well as many slammed Ghalibaf for repeating Ahmadinejad’s behavior. Indeed, soon after the end of the debate, many users on social media uploaded pictures of Ghalibaf and Ahmadinejad next to each other, each holding up a printed document at respective debates, and accusing the Tehran mayor of hypocrisy for “stealing” Mousavi’s statement.

Following the debate, four of the candidates — Rouhani, Ghalibaf, Mirsalim and Raisi — lodged protests with the Election Campaign Monitoring Committee. Rouhani's cultural adviser, Hesamoddin Ashna, said the president filed a complaint with the committee over Ghalibaf’s accusations and because state TV did not give him the opportunity to respond the Tehran mayor’s claims.

Another significant aspect of the debate was Raisi’s apparent decision not to get entangled in Ghalibaf’s clash with Rouhani and Jahangiri. Some hinted that Raisi feared a direct clash with Rouhani, who is a skilled speaker.

The big highlight seemed to be that Jahangiri's allegations about the embassy attack helped him gain traction with voters, according to online surveys after the debate.

Ghalibaf’s harsh attacks had not been expected. Some believe the Tehran mayor’s real aim was to portray himself as the only conservative candidate. Indeed, following the debate, his supporters slammed Raisi for his “inabilities,” lack of courage and inaction in the face of the heated battle between Ghalibaf and Rouhani and Jahangiri.

On the other hand, Ghalibaf’s actions were criticized by Raisi’s supporters, who surmised that the Tehran mayor’s direct clash with Rouhani was planned in order to portray Ghalibaf as effective and get him the upper hand vis-a-vis Raisi in opinion polls.

By accusing Rouhani and the people behind him as belonging to “the 4%” — an apparent adaptation of the Occupy Wall Street movement’s reference to the “1%” — who are violating the rights of the “96%,” Ghalibaf apparently imitated US presidential candidate Bernie Sanders and was seeking to attract the votes of the middle class.

Saeed Leylaz, a prominent Reformist analyst, said April 29, “Mr. Ghalibaf definitely cannot portray himself as the representative of the poor classes, or as he himself said, the 96%.” Leylaz added, “This gesture doesn’t match with Ghalibaf’s background,” referring to the various corruption scandals rocking the Tehran municipality in recent years.

Candidates are scheduled to take part in two more televised debates ahead of the May 19 vote.