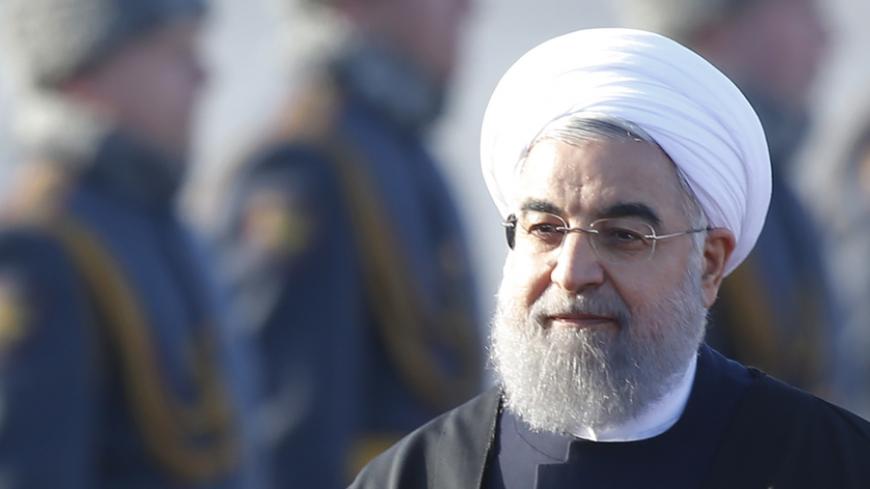 Iranian President Hassan Rouhani turned in a stronger performance in Iran's May 5 presidential debate. Here, he inspects the honor guard upon his arrival at Vnukovo International Airport in Moscow, March 27, 2017. - REUTERS/Maxim Shemetov

In the first debate, broadcast live April 28, the moderate incumbent did not appear engaged and kept his silence in the face of his conservative rivals’ attacks and criticisms. Rather, first Vice President Eshaq Jahangiri, who is believed to have signed up to run to defend Rouhani and then withdraw in his favor before the May 19 election, was described by Reformist and conservative media alike as a phenomenon, as he harshly countered the conservative challengers. Indeed, many Rouhani supporters and analysts were dissatisfied with the incumbent’s performance in the first debate as they expected him to perform more like he did in the 2013 presidential debates, when he traded barbs with conservative Tehran Mayor Mohammad Bagher Ghalibaf and handily defeated him in the election.

However, in the May 5 debate, Rouhani showed off his rhetorical skills from the very first minutes. Prominent Reformist and former Tehran Mayor Gholamhossein Karbaschi said the president appeared happier and more active.

At the same time, Ghalibaf again went on the offensive — this time linking Rouhani’s education minister to the importation of children's clothing, saying such imports harm the domestic economy.

The most controversial issue during the second debate, which dealt with political and social issues, was the Joint Comprehensive Plan of Action (JCPOA). At the time of its signing in 2015, many conservatives expressed staunch criticism of the nuclear deal, but during the May 5 debate, Ghalibaf and fellow conservative Ebrahim Raisi both vowed to protect the JCPOA and remain committed to it. However, they said that they do not consider the deal as perfect, and questioned the Rouhani administration’s ability to take sufficient advantage of it. Indeed, Ghalibaf and Raisi likened the nuclear deal to a check Rouhani “is not able to cash.”

In response, Rouhani challenged Ghalibaf's and Raisi’s command of the details of the nuclear crisis, saying, “What do you know about the JCPOA that [compels] you to talk like this?” In response, Raisi said, “When Mr. Rouhani was the secretary of the Supreme National Security Council [1989-2005], a meeting was held between him and me, and I told him that we had received some reports about the NPT [Nuclear Non-Proliferation Treaty], and I asked him if he was aware of this, but he said [let's] talk about it later.”

Rouhani also accused his rivals — and the conservative camp more broadly — of plotting to kill the nuclear deal while being “jubilant” about the election of US President Donald Trump, since he had pledged to tear up the JCPOA during his campaign. Noting the installment of anti-negotiation billboards by the Tehran municipality headed by Ghalibaf during the nuclear talks, Rouhani said, “If the JCPOA was acceptable to you, then why did you install billboards across Tehran, and spoke in that way with the [Iranian] negotiators. … Your talk was similar to the statements of [Iran’s] opponents, including the Wahhabists [Saudi Arabia] and the Zionists [Israel].”

Another notable development during the May 5 debate was that Reformist candidate Mostafa Hashemi-Taba, a former minister of mines and industries, joined Rouhani and Jahangiri in defending the incumbent moderate administration. Meanwhile, conservative candidates Raisi and Mostafa Mirsalim — a former minister of culture and Islamic guidance — who both were soft-spoken in the first debate April 28, harshly criticized Rouhani and his government May 5. Reformist Abdollah Naseri said that Raisi had set in motion a clear competition with Ghalibaf, whom observers say sought to portray himself as the main conservative candidate in the first debate. The third and final debate, which will focus on the economy, will be held May 12.