Iran’s Basij paramilitary force has been tasked with building the agricultural foundation of a "resistance economy" to combat sanctions, reports an Al-Monitor correspondent from Iran. 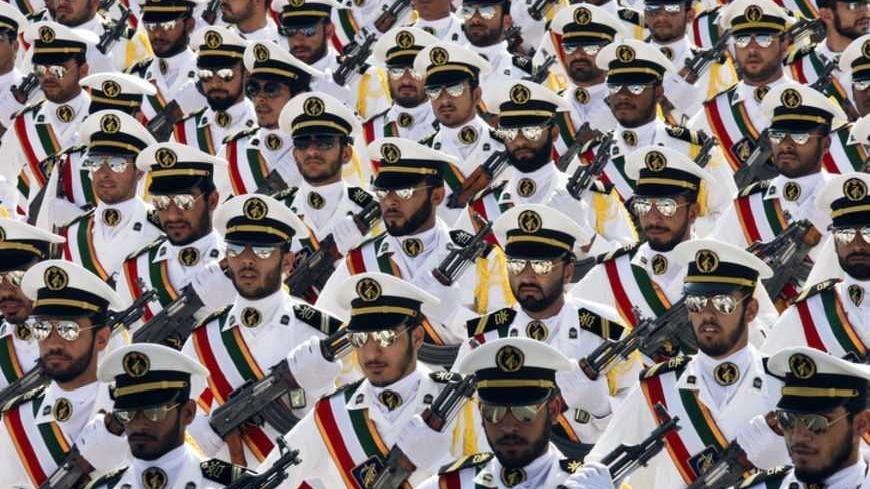 Members of the Iranian Revolutionary Guard march in Tehran in 2011 during a parade to commemorate the anniversary of the Iran-Iraq War (1980-88). - REUTERS

Units of the Iranian Basij, the paramilitary militia established after the 1979 revolution to fight on the front lines against Baathist Iraqi forces, were dispatched to western Iran earlier in March, armed with 100,000 live chicks. They also took with them cheap loans for citizens of Khuzestan to set up hatcheries and inland fish farms.

The Basij ordinarily supplies the brawn for much of the Iranian Revolution Guard Corps' work in religious indoctrination, enforcement of Islamic dress and riot control. The international sanctions on Iran’s financial system because of its nuclear program means that the militia is also now responsible for building Iran’s “resistance economy,” which includes promoting locally grown food supplies and reducing reliance on imports.

Mohammad Reza Naqdi, the rabble-rousing head of the Basij, announced in February that 30 percent of Iran’s poultry needs could be met by raising chickens at home. Naqdi, who has called for the hanging of US military commanders (for a Quran-burning incident in 2012) and the denaturalization of reformist political candidates, claims the sanctions have been a “blessing for Iran.”

“If I were in the authorities' position, I would never set the lifting of sanctions as a condition in nuclear negotiations,” he said in December. “I would tell the enemy to impose as many sanctions as possible on us because we can come to realize our hidden potentials under such circumstances.”

His remarks echo similar comments made by Mohsen Rezaei, the longest-serving head of the Revolution Guard, to the Financial Times in September 2012. “This is not going to be an austerity economy nor will it be an underground economy, but an economy that will be within [recognized] economic theories to address conditions under sanctions,” said Rezaei.

Responding to Khamenei’s speech, Naqdi offered a few specifics. “Don’t drink coffee that is imported. Drink tea or cherry sherbet,” he said in a transcribed speech posted on the Basij website. “If they [Westerners] put people along every Iranian border so that nothing goes in or out of the country, we will still have the water, spades and land we need to cultivate and feed our people.”

Naqdi advocated that Iranians emulate South Korean farmers, who in 2008 rioted over the importation of US beef and one of whom, Naqdi claimed, died from self-immolation. “This is how we should protest,” he said.

In addition to curbing imports, another key goal of the resistance economy is to reorganize the Islamic Republic’s petrochemical industry by refining Iranian oil in-country and reducing dependence on oil rents, which comprise more than 80% of government revenue and provide dollars for the import of food, medicine and consumer goods.

According to President Mahmoud Ahmadinejad, in 2006 Iran had imported 30 million liters of petroleum a day, but today no longer imports any because of his subsidy reform plan suppressing domestic demand.

On the downside for Iranians, self-reliance in the name of the resistance economy has precipitated a pollution crisis because of the lack of high-grade foreign petroleum and foreign expertise to develop Iran’s small and creaky refining capacity. In January, government offices, schools, universities and banks in Tehran were forced to close for five days because of smog. Local radio broadcast that leaving home would be tantamount to “suicide.”

Ali Mohammad Sha’eri, deputy director of the Environmental Protection Organization, denied that Iran’s “emergency fuel” was the cause of the pollution, but admitted that only 20% of the fuel was up to modern standards.

Iran is often erroneously compared to North Korea, but the rhetoric surrounding the resistance economy indeed recalls Kim Il-sung’s juche, his political philosophy inspired by the Maoist idea of "regeneration through one's own efforts."

As in North Korea, Iran is now spinning the line that sanctions will make it stronger. Under pressure, and with no coherent plan for reducing its dependence on oil rents and with imports restricted, the Iranian government has been forced into peddling a falsehood. The truth — that sanctions are working — is politically unpalatable. Laws have even been enacted to ensure adherence to the government line in the run up to the June presidential elections. In addition, in February the government passed a raft of internet laws, one of which prohibited "disturbing public opinion" or "painting a black picture and discussing subjects against the realities of Iran."

There is a resistance economy in Iran, but it is unrelated to urban farming or eschewing coffee. The real resistance economy is the murky network of Iranian-affiliated companies from Malaysia to South Africa that ensure that importers are able to skirt banking sanctions and pay their suppliers. Iranian firms, without patronage from the state, are paying expensive intermediaries in Turkey and the Gulf to move cash into and out of the country, while Iranian oil brokers are convincing foreign refineries to be less assiduous with the shipping paperwork and sell at a discount. Such efforts do little, however, to soften the blow of the economic isolation the sanctions have wrought on Iran.