Iran's Pivot to the East

Iran's trade patterns have shifted in recent years as a result of sanctions, making Asia a new market for Iranian goods. 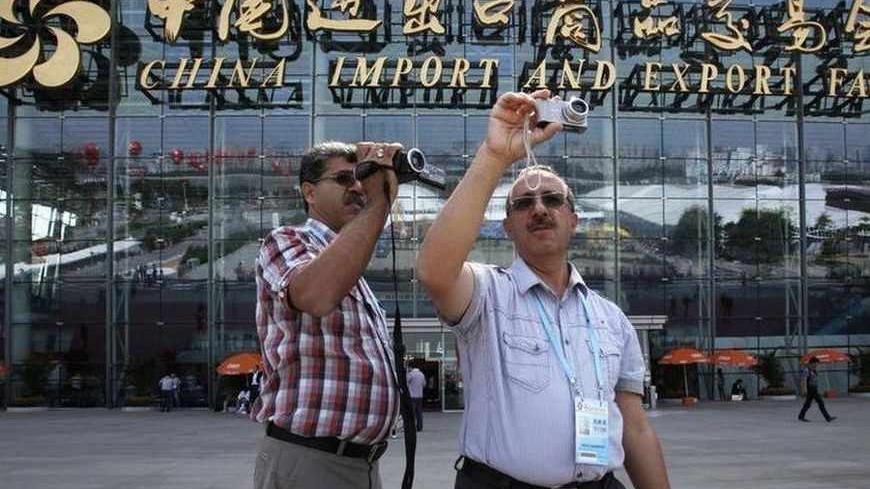 Visitors from Iran take pictures outside an exhibition hall of the China Import and Export Fair, also known as the Canton Fair, in the southern Chinese city of Guangzhou, Oct. 17, 2011. Exporters at China's largest trade show, the Canton Fair, say a darkening economic outlook in Europe and the United States is weighing on orders for Chinese-made goods from Western buyers, potentially boding ill for China's growth prospects. - REUTERS/Bobby Yip

Iran was traditionally a trading partner of Western economies. Even post-revolutionary Iran relied more on trade with Western rather than Eastern partners or developing countries. However, in the past few years, stringent sanctions imposed by Western governments, as well as the growth of Eastern trading partners, have changed Iran's trading patterns. This article will take a closer look at two important trends: the transformation of Iranian exports and the changes in Iran’s trading partners.

Oil and gas exports initially took a dive in 2012 due to EU sanctions on the purchase of Iranian oil and US sanctions on the Iranian Central Bank, which undermined exports to non-European buyers of Iranian oil. However, growing gas and gas condensate exports will be the main factor behind the growth of petroleum exports in the current Iranian calendar year.

Based on the latest statistics from the Iran Customs Administration, in the first three months of the current Iranian calendar year, which began on March 21, 2013, the value of Iran’s non-oil exports reached $7.7 billion while the value of imports stood at $9.4 million, i.e., a quarterly non-oil trade deficit of $1.7 billion.

Taking into account the oil and gas exports, the country is producing a healthy trade surplus that will help the economy regain a new balance after years of failed economic and trade policies under the Ahmadinejad government. Though severe banking sanctions have impeded the repatriation of export revenues, Iran will develop new mechanisms to repatriate these funds and to boost its economy.

In fact, one of the consequences of the current banking sanctions is the growth of a new type of barter trade. The sanctions-related difficulties in making payments for imports have compelled many Iranian merchants to look for export opportunities in order to generate their own hard currency income outside Iran. The proceeds from exports are then used to import the needed goods — a method that circumvents banking transactions between Iran and foreign banks. The devaluation of the Iranian rial in 2012 has further facilitated the growth of non-oil exports from Iran — a welcome development for Iranian merchants.

In the 1990s, during the process of the country's post-war reconstruction, Iran introduced a pro-European foreign and trade policy, mainly focusing on trade with the EU, especially with Germany. For more than 15 years, Germany was Iran’s largest trading partner followed by Japan, Italy and France.

The emergence of the Iranian nuclear stand-off and the consequent sanctions led to a gradual decline in trade with Western partners. This process was accompanied by trade growth between Iran and Asian partners such as China and India. The Iranian calendar year 1387, which ended on March 20, 2009, represented the first year in modern history that Iran had traded more with Eastern (Asian) countries compared with Western nations.

If we look at the official statistics of the first quarter of the current Iranian year, the ratio is 75% (Asian trading partners) and 25% (rest of the world). The 2012 EU-wide trade with Iran had dropped to 12.8 billion euros from 27.8 billion euros in 2011. Within the EU, Italy, Germany and Greece were the top trading partners of Iran. Evidently, the continued growth of Asian trading partners is also related to the fact that the same countries are also the main buyers of Iranian crude oil, i.e., China, India, Japan and South Korea.

The UAE features as one of Iran's top import and export trading partners because the UAE, especially Dubai, is used by many European and Asian companies as the location for the re-export of goods to Iran. Furthermore, Dubai-based traders are key players in managing Iran’s international commodity exports in petrochemicals and petroleum products.

A final point on trading partners is the growing role of regional export markets for Iran. In fact, for non-oil exports, Iraq is the most significant market for Iranian products, with annual trade hitting $10 billion. Other regional markets such as Turkey, Afghanistan, Turkmenistan and Pakistan are also gaining in significance.

The upcoming change of government in Iran will lead to new policies and initiatives. On one hand, the Rouhani government will attempt to secure some sanctions relief through creative nuclear diplomacy. On the other hand, there could be potential for reviving some Iran-EU trade in areas that are not hit by external sanctions, such as pharmaceuticals and medical equipment. Evidently, a lot will depend on the outcome of nuclear negotiations, which will be resumed after the official inauguration of the new government. Nonetheless, the process of reviving Iran-EU trade will take time.

The fact is that many businesspeople and government officials are not happy about the growing presence of Asian companies and products in the Iranian market. They argue that the lower quality of such products will increase the actual cost to the Iranian economy and believe that Iran should look for ways to reintroduce imports from the more developed economies. The combination of this tendency, as well as sanctions imposed by Western governments, will compel Iran to look for medium-quality products in countries such as South Korea, South Africa and Brazil, thus further boosting trade with emerging economies.

In the meantime, the new momentum generated by the June elections will push Iranian industrialists to develop export markets. Considering the growing trend of non-oil exports and the declining trend of imports (also clear in the above table), it would be conceivable that Iran will achieve its goal of a balanced non-oil trade by 2014.