While President Rouhani has not faced severe criticism over the nuclear deal from Principlists and even IRGC commanders, some members of the Basij are voicing their opposition 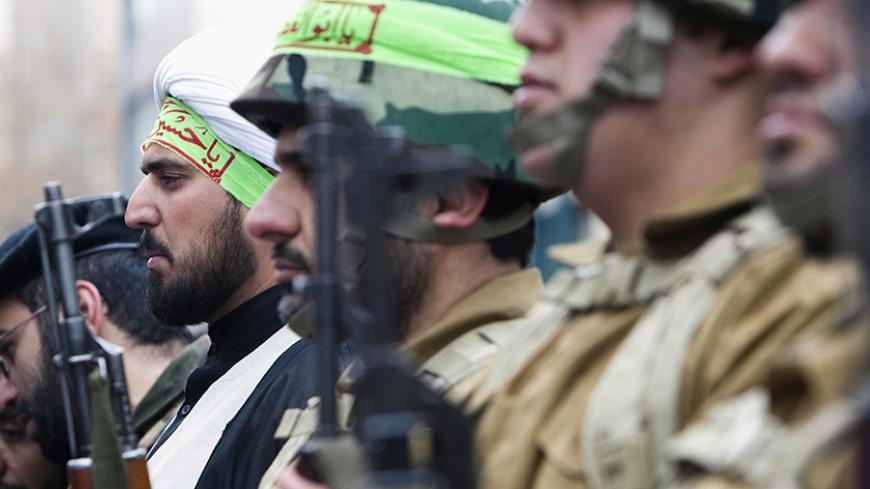 A cleric who is a member of Iran's Basij militia attends a military parade in front of the former US Embassy in Tehran, Nov. 25, 2011. - REUTERS/Raheb Homavandi

TEHRAN — Iranian President Hassan Rouhani’s administration has not been faced with severe domestic criticism over its nuclear deal with six world powers. At least not from moderate Principlists and even commanders of the Islamic Revolutionary Guards Corps (IRGC). Rather, some elements of the paramilitary Basij — most of them younger hard-liners — have objected to the deal primarily on social networks such as Instagram, and the popular smartphone app Viber.

One of these figures is Seyed Morteza Rashidi, who is based in the holy city of Qom. Since the conclusion of the nuclear deal earlier this month, Rashidi has lashed out at Rouhani and the negotiating team — including Foreign Minister Mohammad Javad Zarif and Deputy Foreign Minister Abbas Araghchi — in over 20 Facebook posts. He argues that "the Islamic Revolution is now controlled by those who do not even believe in its principles, but are also as Westernized as one can get." One week after the agreement was struck, Rashidi wrote on his Facebook page: "The deal, signed by enemies of the Revolution, is legally too flawed. It seems that Iranian negotiators are either traitors or uneducated individuals."

Rashidi often fills his page with quotes and pictures of Supreme Leader Ayatollah Ali Khamenei. There are numerous other pro-Khamenei young people active on social networks, many of whom say they don’t fit into any Principlist grouping. They say they follow the path of "Imam Khamenei" and that they’re willing to give their lives for him.

Reza Shams, an Instagram user popular among Basij members, has also expressed disappointment with Iran's compromises in the negotiations. He writes, "Our resistance became void. If we wanted an agreement, why did we suffer for eight years? Why did we sacrifice so many lives? We let them die for nothing by suspending our enrichment," referring to the assassinations of several Iranian nuclear scientists from 2010-2012.

Shams's post led to arguments among pro-Khamenei figures. Mehdi Zarei commented, "Reza Shams! The Supreme Leader has been in favor of the agreement. Don't be more Catholic than the Pope!"

Meanwhile, some publications and websites affiliated with the Basij have urged the Majles to hinder the agreement. Ya Lesarat, the official media outlet of the hard-line group Ansar-e Hezbollah, published an article July 25 asking members of parliament to react to some clauses of the agreement: "The Iranian people and senior officials of the Establishment are waiting for a decisive and revolutionary response of MPs to bad clauses included in the Vienna agreement."

Moreover, the Student Basij Organization — the main student arm of the paramilitary force — released a statement July 20 criticizing some clauses of the deal, such as the ones on "re-establishment of sanctions in case of violations" and restrictions on Iran's missile program. It further called for a delay in the adoption of the agreement in the United Nations Security Council, stating, "It is stated that countries have 90 days to review the Joint Comprehensive Plan of Action. The Basij Student Organization requests that the related resolution be adopted after this period, provided that the concerned clauses are corrected." The statement was published by Fars News Agency, a news outlet viewed as being close to the IRGC.

Of note, Khamenei has always supported the Basij. He has frequently requested its engagement in the political arena to combat enemies. In a speech on July 13, 1999, four days after the biggest anti-government student demonstration since the 1979 revolution, Khamenei said, "I ask Basij members to be present wherever necessary to oppress enemies." More recently, the Basij played a significant role in crushing the 2009-10 street demonstrations held under the banner of the so-called Green Movement.

Considering Khamenei’s apparent endorsement of the deal, the Basij’s adverse reaction to the agreement raises important questions. If implemented, with the approval of Khamenei, will the deal trigger conflict between Iran’s political establishment and the Basij? Will it weaken the paramilitary force?

Mahmoud Sadri, professor of sociology at Texas Woman’s University, said in an interview with Al-Monitor that Khamenei is seen as a charismatic figure among the Basij, Ansar-e Hezbollah and some levels of the IRGC. Sadri does not believe that the nuclear agreement weakens the relationship between the political establishment and the Basij: “For these believers, even a total reversal of direction would not register as a betrayal, but as a manifestation of the inscrutable will of God in the decisions of the supreme leader. Therefore, Ayatollah Khamenei has nothing to fear from the extreme right ideologues who even in their anger … will have to toe the line of the Vali-ye-Faqih, whom they recognize as a viceroy of the 'Hidden Imam.'”

A member of the Basij Quds Base in north Tehran’s Tajrish Square told Al-Monitor that he and his “brothers” will follow Khamenei’s orders without any question, ”though we are always ready to destroy Rouhani’s diplomacy and his deal with [US President Barack] Obama right after our leader asks us to do so.” Ominously, he added, “As long as our leader is silent, we are silent, too, but God forbid if he breaks his silence and orders us against this deal.”

It seems that Khamenei's Eid al-Fitr speech July 18, which featured anti-American remarks, was made to encourage the Basij in its opposition to the United States. Khamenei said, "Even after this deal, our policy toward the arrogant US will not change."

Reza Alijani, former editor-in-chief of the opposition publication Iran-e-Farda, told Al-Monitor that "by focusing on sanctions relief and expressing intense words against the United States, Khamenei tries to assure his supporters that Iran's policy toward the United States has not changed. He attempts to diminish doubts inside Iran. On the other hand, he allows his extremist supporters to criticize and even humiliate the agreement."

It seems that this policy has been effective. Posts uploaded by Basij members after Khamenei's speech reveal jubilance about his remarks. Supportive comments are posted alongside pictures of Khamenei, and declarations of loyalty to him abound. For instance, Vahid Yaminpour, a noted Basij theoretician and former state television producer with over 55,000 Instagram followers, posted Khamenei's photo with an admiring caption right after the July 18 speech.

Thus, it appears that for now, Khamenei's approach is geared to ensure the implementation of the deal while containing the most severe criticism of the accord.