Will Erdogan wind up alone after alienating Arabs?

Following Trump’s decision to pull out of Syria, Ankara fears isolation after years of maneuvering to be an effective player in the Middle East. 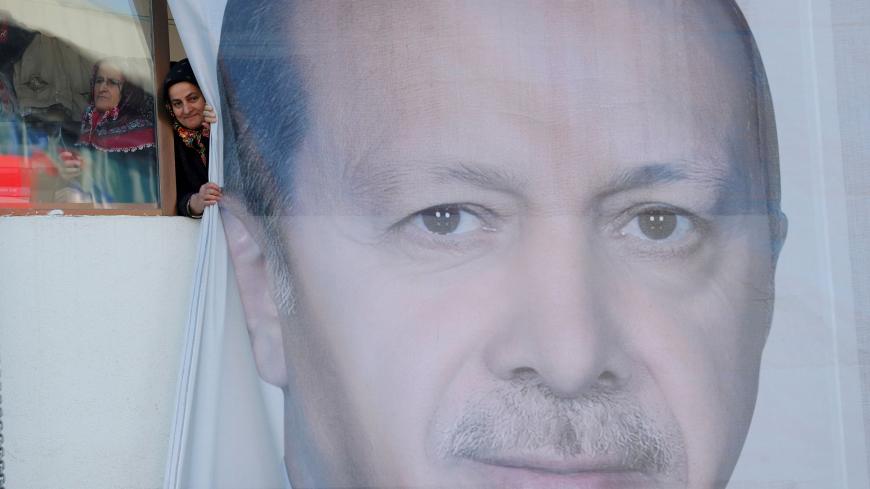 Supporters of Turkish President Tayyip Erdogan wait for his arrival during an opening ceremony in Istanbul, Dec. 8, 2018. - REUTERS/Murad Sezer

Since President Donald Trump’s decision Dec. 19 to pull US troops out of Syria, Turkish President Recep Tayyip Erdogan has intensified his rhetoric against some states that he accuses of supporting terrorist groups. Although Erdogan refrains from naming these states, most pro-government media have interpreted his words to mean the United States.

While US-bashing may be paying off as Turkey's municipal election campaign intensifies, Ankara’s worries extend beyond US support for the People’s Protection Units (YPG) — which Turkey considers a terrorist group — and other Kurdish militias in Syria. Indeed, Ankara is deeply concerned about its fast-approaching isolation after years of clumsy efforts to be a game-changer in the region. Ankara’s rhetoric had presented Turkey as a main player in the region, and positioned it against Israel and Western powers.

Since Dec. 16, the Arab League has shown signs of re-embracing the regime of Syrian President Bashar al-Assad. Not only states in the Levant, but also Gulf states, are re-establishing relations with Damascus. In the first years of the Syrian civil war, which began in 2011, Saudi Arabia and Turkey were on the same side in supporting the toppling of the Baathist government. For example, between 2014 and 2017, Saudi Arabia was the country Erdogan visited most often.

Currently, the mainstream Turkish press (which is heavily censored) is publishing reports criticizing the role of Gulf Cooperation Council (GCC) states in Syria. Most commentators refrain from directly criticizing Saudi Arabia's funding of Syrian reconstruction projects, or the Saudi-led boycott of Turkish goods. The Turkish-Saudi feud, which peaked with the murder of journalist Jamal Khashoggi in October, springs from multiple issues and is likely to worsen in the near future. But Turkish enmity in the region isn't limited to Gulf countries (though it has supported GCC-shunned Qatar), but also includes Egypt, Jordan and others. A senior Western diplomat in Ankara said, “Turkey couldn't even sustain a limited free-trade agreement with Jordan. Its military agreements with Somalia and Qatar are on shaky ground at best. It's not possible to establish good relations with many Arab states if you are quarreling with Saudi Arabia.”

The disappointment in Ankara is deeper than meets the eye. Establishing friendly relations with all Muslim countries, particularly those in the Middle East, and bonding with Sunni Arabs have been among Erdogan’s major foreign policy goals. It's been a tradition for Erdogan to greet several Arab cities during his election victory speeches. Through different agencies, such as the Turkish Cooperation and Coordination Agency and the Religious Affairs Directorate (Diyanet), governments under the Justice and Development Party (AKP) have spent billions of dollars in different parts of the Arab world. But Erdogan’s policies of embracing Arab Muslims have utterly failed. In the words of a senior Turkish diplomat in Ankara, “We lost the Middle East.”

Erdogan’s New York Times op-ed Jan. 7 also signals that the Turkish government is having a difficult time adjusting to the fast-changing realities of the region.

Why did Turkey’s relations with the Arab world go sour?

First, the government’s efforts to establish friendly relations with Arab states have not found much support in Turkey. The uncontrolled influx of refugees, particularly from Syria, hasn't helped. In addition, the AKP government’s alliance with the Nationalist Movement Party, also known as the Gray Wolves, has brought about a simultaneous rise in nationalistic fervor. Inadequate planning has made Syrian refugees' integration into Turkish society all the more difficult. Anti-Syrian racism is expected to grow along with deepening economic problems in Turkey.

Second, Ankara is concerned that the 4 million Syrian refugees in Turkey are possibly being influenced by radical Salafi ideologies. A theology professor from a university in Ankara who asked to remain anonymous told Al-Monitor, “Diyanet has been trying to keep the Syrians in Syria in its orbit, but Syrians inside Turkey rarely attend Diyanet mosques. Some are attending established religious orders' ceremonies, but most are setting up their own religious establishments. Initially, the government thought, 'These are Sunni brothers,' but now there is desperation about how to control their activities. It's an open secret that Turkish intelligence doesn't have sufficient Arabic speakers to monitor their activities. If they fall under the influence of the Saudi version of Islam [strict Sunni Wahhabism], how can the government restrain them?”

Ankara has to carefully handle its relations with the Arab world now that it hosts a sizable Arab diaspora that may not be willing or able to assimilate smoothly.

Next is the Turkish government’s alliance with the Muslim Brotherhood. In 2011, Ankara celebrated Arab Spring uprisings and worked to see the Brotherhood gain more strength in Egypt, Tunisia, Yemen and Syria. Since then, Turkey has been deeply disappointed. Erdogan’s reluctance to acknowledge the Assad regime’s apparent victory after almost eight years is particularly telling. Erdogan hasn't, at least publicly, accepted the need to normalize relations with Damascus. Other regimes that have been adamantly anti-Assad have adjusted to the new reality, but not Erdogan. Now, the much-anticipated return of Syria to the Arab League will only make Turkish isolation more noticeable.

A retired general told Al-Monitor, “The Erdogan and Assad families were friends vacationing together in 2008. ... Syria minimized its support for the PKK [the Kurdistan Workers Party, which Turkey considers a terrorist group]. We had waived visas [with Syria], increased trade and were conducting joint military exercises.”

Indeed, in 2009-2010, Turkey and Syria even had joint ministerial meetings on a range of issues.

“Then Erdogan single-handedly took a turn, siding with GCC states and positioning Turkey as the archenemy of the Assad regime," added the general. "Other countries have jumped off this boat and one way or another are trying to normalize their relations with Damascus. We are neighbors and still acting as if the Assad regime will end soon. Even [Erdogan's NYT op-ed] is written as if the Assad regime doesn't exist. This is a dangerous game for Turkey."

Turkey's failure to establish better relations with Arab countries is a strong blow to its soft-power dreams. Erdogan’s Rabia hand gesture, which he shows in support of the Arab Spring, was even shunned in Tunisia during his last visit, in December 2017. Yet Erdogan campaigns in Turkey with the sign, indicating he still can't accept the political changes. And as Erdogan continues to express his wishes to deepen relations with Qatar, US Secretary of State Mike Pompeo appears in the news struggling to mend bridges between the GCC and Qatar.

So far, there are no efforts to help Turkey improve relations with the Arab world. To make matters worse, news of increased communications between Israel and Gulf states is contributing to Turkey’s deepening fears of isolation. For instance, an unverified article published Jan. 8 alleged that officials from Egypt, Saudi Arabia and the United Arab Emirates met secretly last month with Israeli Mossad Director Yossi Cohen. The Middle East Eye story, citing undisclosed sources, said the officials discussed how to "welcome [Assad] back into the Arab League to marginalize the regional influence of Turkey and Iran."

For decades, Turkish Islamists have blamed the secular establishment for being too timid to establish better relations with the Arab world. For example, Turkey's presidential spokesman, Ibrahim Kalin, acknowledged in 2017 that for years the republic has fostered enmity toward Arabs. Kalin said that, in turn, the Arab world harbors anti-Turkish sentiment. However, neither Kalin nor others in Erdogan’s 16 years in national government have come up with effective solutions to these bitter perceptions.

So have AKP’s efforts made Turkey’s place in the Arab world any better today? Looking at Ankara’s nervousness about the YPG and other Kurdish militias in Syria, it's difficult to appreciate the AKP’s efforts as effective or even promising. Even the talk of gradual US withdrawal from Syria was sufficient to reveal the long-brewing anti-Turkey anger in the region. Can Erdogan survive his shrinking neo-Ottoman dreams? This is the question now being put on the table by Ankara suits.

Correction: Jan. 18, 2019. An earlier version of this article referenced Turkey's military arrangements with Sudan and Qatar, when in fact the intended arrangments were wtih Somalia and Qatar.