The Turkish president will discuss Syria with his Russian counterpart in Moscow this coming week, as Qatar's Sheikh Tamim takes spotlight in Beirut. 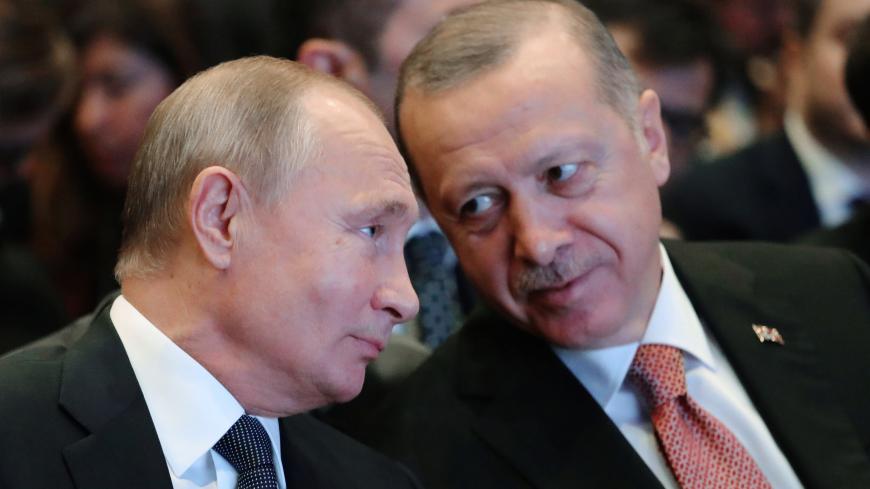 Russian President Vladimir Putin (L) and his Turkish counterpart Recep Tayyip Erdogan speak during a ceremony to mark the completion of the sea part of the TurkStream gas pipeline, in Istanbul, Turkey, Nov. 19, 2018. - Sputnik/Mikhail Klimentyev/Kremlin via REUTERS

Erdogan at crossroad in Syria

Putin wants the Syrian government to take control of eastern Syria, and eventually the entire country, following the withdrawal of US troops. Erdogan’s priority is that the People’s Protection Units, the core of the US-backed Syrian Democratic Forces (SDF), do not cut a deal with Damascus that gives the Syrian Kurdish force a second wind after US forces leave.

“While US-bashing may be paying off as Turkey's municipal election campaign intensifies, Ankara’s worries extend beyond US support for the People’s Protection Units (YPG) — which Turkey considers a terrorist group — and other Kurdish militias in Syria,” writes Pinar Tremblay. “Indeed, Ankara is deeply concerned about its fast-approaching isolation after years of clumsy efforts to be a game-changer in the region.”

“The apparent thaw in Damascus’ relations with the Arab world is more bad news for Turkey, which is already having a difficult time coping with the rapid change in the balance of power in Syria,” writes Semih Idiz. “If President Bashar al-Assad is welcomed back to the Arab fold, as many expect, it will be the final nail in the coffin of Ankara’s Syria policy, which has been plagued with misjudgments, false assumptions and overambitious expectations from the start.”

“As countries like Sudan, UAE, Bahrain, Egypt, Jordan, Iraq, Lebanon and Tunisia line up to favor the normalization of ties with Syria — and many expect Saudi Arabia to join them eventually — Ankara could end up facing an anti-Turkish Arab bloc it never expected,” adds Idiz. “Such a bloc could also complicate Turkey’s plans to enter northern Syria to clear the town of Manbij and territories east of the Euphrates River from the Kurdish People's Protection Units … especially now that Damascus has declared its opposition to this incursion.”

“The disappointment in Ankara is deeper than meets the eye,” continues Tremblay. “Establishing friendly relations with all Muslim countries, particularly those in the Middle East, and bonding with Sunni Arabs have been among Erdogan’s major foreign policy goals. It's been a tradition for Erdogan to greet several Arab cities during his election victory speeches. Through different agencies, such as the Turkish Cooperation and Coordination Agency and the Religious Affairs Directorate (Diyanet), governments under the Justice and Development Party (AKP) have spent billions of dollars in different parts of the Arab world. But Erdogan’s policies of embracing Arab Muslims have utterly failed. In the words of a senior Turkish diplomat in Ankara, ‘We lost the Middle East.’”

‘The government’s efforts to establish friendly relations with Arab states have not found much support in Turkey,” adds Tremblay. “The uncontrolled influx of refugees, particularly from Syria, hasn't helped. In addition, the AKP government’s alliance with the Nationalist Movement Party, also known as the Gray Wolves, has brought about a simultaneous rise in nationalistic fervor. Inadequate planning has made Syrian refugees' integration into Turkish society all the more difficult. Anti-Syrian racism is expected to grow along with deepening economic problems in Turkey.… Ankara is [also] concerned that the 4 million Syrian refugees in Turkey are possibly being influenced by radical Salafi ideologies.”

Erdogan also faces difficult upcoming choices in Idlib and Manbij. Idlib could be a “bargaining chip for Ankara in a potential deal with Russia,” writes Kirill Semenov. “Moscow and the Syrian regime have wanted to launch a military operation against HTS [al-Qaeda-linked Hayat Tahrir Al Sham] without the moderates in the way. The moderate groups are gone now.”

“Moscow could influence Damascus to allow Ankara to spread its control over some of the Kurdish territories. For its part, Ankara would withdraw its forces from Idlib, clearing the way for Russia and the Syrian regime to attack the militants there, returning Idlib to the Syrian government's authority and relieving Turkey of any further obligations in the de-escalation zone,” adds Semenov.

“Turkey probably lost interest in controlling Idlib and carrying out the Sochi memorandum once it learned about US plans to withdraw from Syria prematurely,” writes Semenov. “At that moment, the operation east of the Euphrates and eliminating SDF troops in Manbij became a priority.”

“With this in mind, the ongoing confrontation with HTS in Idlib and the significant presence of Turkish troops there could be considered a reckless positioning of forces,” continues Semenov. “On the other hand, the moderate opposition's withdrawal from Idlib to the ‘protectorate’ in northern Aleppo will double the number of SNA troops deployed there for attacks on the Arab-Kurdish SDF, decrease the number of Turkish troops needed in Idlib and partly deflect some military leaders' criticism of the government. Moreover, this takes care of the issue of 'dividing' the moderate opposition from the radicals, which used to cause many debates with Moscow. (Moscow initially wanted all the opposition forces to leave the area, while Turkey supported and received help from the more moderate ones and wanted to keep them.) Now the radicals are staying in Idlib for the time being while the moderate opposition as a whole is moving to the Afrin area.

“In this situation, Moscow is willing to play along with Turkey, at least to delay action for a while in Idlib, even though terrorists control the entire area,” writes Semenov. “For Ankara this is crucial, since the United States is waffling on a schedule for pulling out troops. Without well-coordinated timing on Erdogan's part, he could risk losing Idlib without the compensation of receiving areas in northern Syria. It's not clear how long Russia will wait before attacking HTS, given the moderate opposition's departure and HTS' creation of a terrorist pseudo-state under its puppet Syrian Salvation Government.… Time is not on Turkey's side. HTS is growing stronger, and the Kurds in Manbij and east of the Euphrates are seeking backup support from Damascus. Turkey can't act until the US makes up its mind about withdrawing.”

“Manbij has been a focus of activity since the US withdrawal was announced,” writes Jasper Mortimer. “NTV has broadcast footage of Turkish troops and their Syrian opposition allies, the Free Syrian Army, on the outskirts of Manbij, while Russian armored vehicles drive around on the opposite side of the town. The Russians support the Syrian government army, which has deployed to the outskirts of Manbij.”

On Jan. 16, an Islamic State terrorist blew himself up at a Manbij restaurant, killing 16 people, including four Americans — two service members, a civilian who worked for the US Defense Intelligence Agency and a military contractor.

“We are convinced that the best and only solution,” Russian Foreign Minister Sergey Lavrov told reporters in Moscow, “is the transfer of these territories to the control of the Syrian government,” adding, "We welcome and support contacts that have now begun between Kurdish representatives and Syrian authorities so they can return to their lives under a single government without outside interference."

Sheikh Tamim bin Hamad Al Thani, the emir of Qatar, seized the spotlight in Beirut on Jan. 20, capitalizing on Arab squabbling over Syria to take the first seat at the Arab economic summit.

The summit was supposed to have included up to eight heads of state, but Lebanese and regional tensions over Iran’s role in Lebanon, and Syria’s possible return to the Arab League, led to only the presidents of Somalia and Mauritania saying they would make the trip to Beirut, with other participants attending at the ministerial level.

Then Sheikh Tamim announced he would lead his country’s delegation, and in one stroke, Qatar was back in the game, on Syria and in Lebanon, at the expense of Saudi Arabia, as Riyadh continues to find its footing after the murder of journalist Jamal Khashoggi, as Bruce Riedel writes this week. Saad Hariri, who is seeking to conclude negotiations on a new Lebanese government, has been one of a handful of Arab and world leaders who has stood by Mohammed bin Salman, Saudi Arabia’s crown prince and minister of defense, following the Khashoggi killing.