There has been a vacuum created by a decline of Saudi influence in Lebanon that Qatar now seeks to fill. 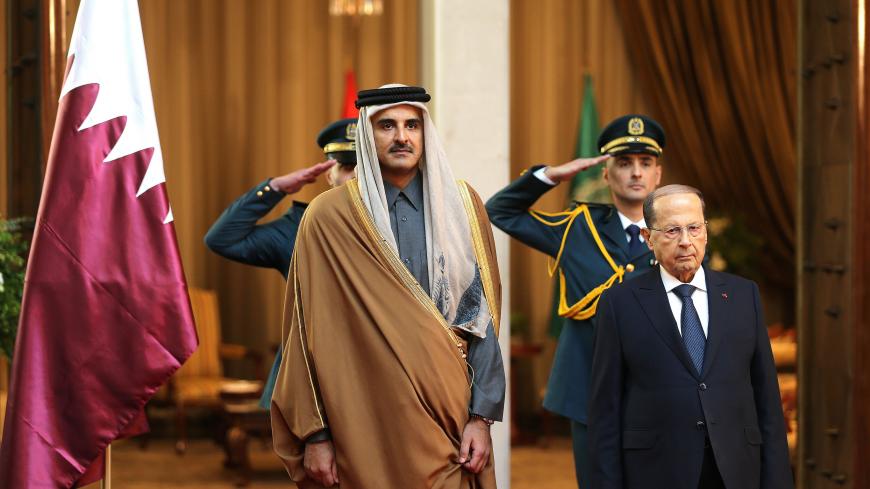 For years, Lebanon’s economic credentials have been sinking. The country with the world’s third highest public debt to gross domestic product ratio has paid an economic price for the decline in tourism from Gulf Cooperation Council states such as Saudi Arabia and the United Arab Emirates against the backdrop of major financial burdens imposed by the Syrian conflict and refugee crisis.

Within this context, on Jan. 21 Qatar announced that it will bolster the ailing Lebanese economy by investing up to $500 million in Lebanese government bonds. This cash infusion will provide the bond market with assurances following Lebanese officials’ hints at a debt restructuring later this month that spooked markets as Lebanese politicians rushed to convince investors that their money was secure in the country. Whether Qatar plans to purchase foreign-currency bonds or local-currency debt remains unclear.

Qatar’s decision came one day after the Arab Economic and Social Development Summit held in Lebanon, during which Qatar’s Emir Sheikh Tamim bin Hamad Al Thani and Mauritania’s President Mohamed Ould Abdel Aziz were the only Arab heads of state in attendance. As no other GCC monarch attended, the Qatari emir’s decision to do so and to meet with Lebanon’s President Michel Aoun signaled Doha’s determination to stand by the Mediterranean country in a time of major economic and political challenges.

In the words of Qatar's Foreign Minister Mohammed bin Abdulrahman Al Thani, his country made the decision to bolster Lebanon’s economy based on the “profound fraternal ties between the two brotherly countries.” He told Qatar News Agency, “We wish stability and prosperity for the Lebanese Republic and the Lebanese people, and that the Lebanese economy will recover. … The region needs a strong and prosperous Lebanon.”

Doha’s diplomatic and economic offensive in Lebanon aims to increase Doha’s influence in the country’s fractious political arena at a time when some of Riyadh’s recent foreign policy decisions vis-à-vis Beirut have hurt the Saudis’ standing in Lebanon. In 2016, Saudi Arabia suspended a $3 billion aid package to Lebanon due to the kingdom’s grievances over Hezbollah’s role in the Lebanese political landscape. The following year, Riyadh lost some goodwill in the country following the Prime Minister Saad Hariri saga of November 2017.

A void for Qatar to fill

Consequently, there has been a vacuum created by a decline of Saudi influence in Lebanon that Qatar now seeks to fill. The leadership in Doha sees the time as opportune for presenting Qatar as a wealthy and benevolent Gulf state that helps Lebanon financially without attaching any strings to further a divisive sectarian agenda in the religiously diverse Arab country.

Qatari help for Lebanon must be understood within the historical context of Doha stepping in to assist Lebanon when previous nightmares left the country in ruins and political crisis. For example, after Israel destroyed much of the Lebanese infrastructure during the war of 2006, Doha (as well as Riyadh) financed major development projects to rebuild the war-torn country. In 2008, Qatari diplomats hosted Lebanon’s conflicting groups for talks with the objective of helping the Lebanese factions overcome a political stalemate. Due to the talks in Qatar, presidential elections went forward.

Building on goodwill that Qatar previously obtained in Lebanon and to capitalize on Saudi Arabia’s declining influence there, Doha is determined to further propel itself into the country’s complicated political landscape and establish itself as one of Beirut’s increasingly important regional partners. As the Arabian emirate remains boycotted by its GCC neighbors and Egypt, Qatar is keen to solidify strong relations with more countries throughout the Middle East and the world at large in order to counter Riyadh and Abu Dhabi’s agenda of casting Qatar as a pariah state in the Gulf. Qatar will use its financial wealth to invest in Arab countries that have stood by Doha throughout the GCC crisis, including not only Lebanon but Jordan, Iraq and Sudan too.

Ultimately, the Lebanese economy needs far-reaching structural reforms to truly overcome the major challenges ahead. The cash infusion from Doha, while extremely welcome in Beirut, will not solve Lebanon’s financial problems in their entirety. As an analyst from MUFG Bank explained, the investment from Qatar “will only kick the can down the road, as Lebanon’s challenges are structural.” Nonetheless, it goes without saying that Qatari support for the battered bond market in Lebanon will improve Doha’s standing with Beirut at a time when Hezbollah’s expanding influence in the country has severely hurt Lebanon’s relations with Bahrain, Saudi Arabia and the UAE.

In this sense, when Qatar is maintaining its rejection of Syrian President Bashar al-Assad’s legitimacy and refusing to restore relations with Damascus while also accepting an Iranian role in Syria that Riyadh, Abu Dhabi and Manama cannot accept, Doha is set to maintain a highly independent foreign policy in the Levant. By standing in support of Lebanon, Doha is projecting itself into a country that is a constant focus of grander regional powers that jockey for influence in the country via proxy, now pitting Saudi Arabia against not only Iran, but also Qatar, too.

In terms of the Gulf’s evolving geopolitical balance of power, Qatar’s economic and diplomatic offensive in Lebanon this month highlights how far Riyadh is from achieving the underlying goals of the blockade. Such objectives have centered around preventing Doha from conducting an autonomous and influential foreign policy that undermines the kingdom’s traditional role as the anchor of a conservative order in the Sunni Arab world. At the end of the day, the Gulf crisis has served to make Qatar more confident as Doha challenges and counters the longstanding influence of Saudi Arabia and the other blockading states throughout the Arab world. As the Qataris see it, Crown Prince Mohammed bin Salman’s Saudi Arabia has “lost” Lebanon and now the opportunity has arisen for Doha to fill the void. Meanwhile, the blockading states will push narratives about Doha’s move in Lebanon providing further confirmation of alleged Qatari support for Hezbollah.

It is remarkable how much the region has changed since several years ago, when Doha and Riyadh were both arming Sunni rebels in Syria who directly clashed with Hezbollah fighters and Qatar would have likely supported efforts to bring Lebanon closer to Saudi Arabia and farther away from Iran. Now Doha has joined Riyadh and Tehran in the geopolitical competition for influence in Beirut.