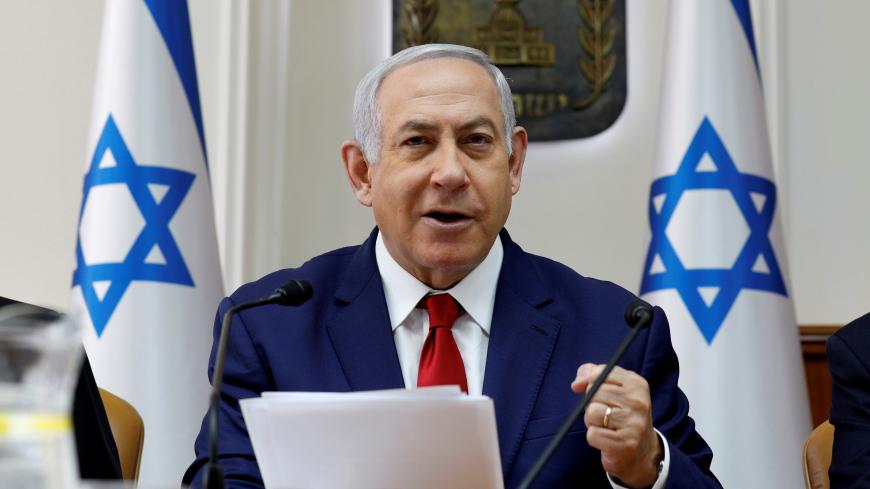 On the afternoon of Jan. 7, not a single Likud minister had any idea what Prime Minister Benjamin Netanyahu intended to announce that evening. Like other Israelis, they saw reports about Netanyahu’s plans to deliver what the Likud press office described as “a dramatic announcement." Senior Likud officials — the top echelons of the ruling party — were driven crazy, along with the rest of the country, as rumors spiraled for hours amid heightened tension. It all ended in a magnificent anti-climax: A stern-faced Netanyahu informing the citizenry that requests he had made to confront his accusers — former associates who have turned witnesses for the state — were denied. “What do they have to be afraid? What are they hiding?” Netanyahu asked.

The event turned out to be yet another stage in Netanyahu's frontal attack against legal authorities since he found out that Attorney General Avichai Mandelblit intended to announce, before the April 9 elections, a decision on whether to indict the prime minister on charges of bribery, pending a hearing. After all, Netanyahu called snap elections for April to avoid such a scenario, only to find himself in a spin.

Until that happens, if it happens, Netanyahu intends to continue hammering away at the public, especially his electoral base, with a simple, user-friendly message: Those seeking to bring down the right-wing regime that he heads are persecuting him because they cannot bring him down at the ballot box.

The campaign he is waging is aggressive, unrestrained and unprecedented in its intensity. This is a one-man war in which the top figures of the Likud are mere extras. Some of them were struck dumb by the “severed hand” clip Netanyahu posted Jan. 5, in which he compared himself to an innocent man on trial who has had his hand chopped off on the judge’s orders, only to be found innocent when the truth emerged. “Can someone give him back his hand? Can someone give you back the elections?” Netanyahu asked his Facebook viewers.

The ministers are all speaking to the media in one voice, and the reason is clear. Netanyahu, despite the indictments that appear to be in the offing, is still the strongest man in the country and the one who controls their fate. That suggests that the 2019 election campaign will be dirty, tough and often hard to watch. Netanyahu’s video clips, usually produced quickly, at a makeshift studio installed at his residence, will continue to surprise and lead the agenda. These elections will not be about war and peace, or the economy and the cost of living, and not even about corruption in the widest sense of the word. They will focus on only one thing: the claim by the right-wing camp that the political left, under the auspices of the legal system, is working to bring down its leader.

The heads of the other parties are clearly unable to produce an alternative agenda. They are being swept up by Netanyahu’s agenda, relegated to issuing reactions and response clips. Netanyahu is forging ahead like a force of nature, leaving behind scorched earth.

And when he is not fighting the attorney general, Netanyahu is busy targeting the chair of the new Hosen LeYisrael (Israel Resilience) party, Lt. Gen. Benny Gantz, the former army chief of staff who enjoys high ratings in the polls even before he has addressed voters and presented his views.

In recent weeks, and more so in recent days, Netanyahu has turned Gantz into the main target of a political annihilation campaign. Netanyahu is operating mostly behind the scenes, issuing orders to his underlings. He has two goals: to show up Gantz as a “leftist” in right-wing clothing, and to erode his image as a defense hawk. Netanyahu wants to be the only Mr. Security in the arena, and Gantz — how shall we put it — is just as accomplished in this line of work.

So, what’s to be done? Netanyahu has obviously opted to send senior officials, chief among them Culture Minister Miri Regev, new Likud recruit Maj. Gen. Yoav Galant and Science Minister Ofir Akunis, to badmouth the general. Gantz is fair game given that this is a political battle. At issue is the way, the content and the uninhibited crossing of acceptable lines. Those coming down on Gantz are spreading rumors and half-truths and creating the illusion that Gantz is hiding a dark secret.

When Galant, a reserve general, lashed out at Gantz in a Jan. 5 interview and said, “I think that he knows why he is silent. I also know why he is silent, and the thousands of officers who served under him know why he is silent,” he creates the impression that Gantz and people close to him are concealing from the public important information. Following his comments, social media was flooded with rumors, and reporters were dispatched to find out what Gantz was hiding. The hints spread by the Likud have to do with supposedly embarrassing incidents during Israel’s 2014 war with Gaza, known as Operation Protective Edge. Galant, it should be noted, was until recent days a government minister representing the center-right Kulanu party and only recently shifted over to the Likud. He also “lost” the chief of staff position to Gantz in 2011, following an investigative report alleging that he violated planning and building codes at his home. Galant is now required to provide proof of the serious allegations he is making against Gantz.

Benny Gantz is not the only target. So is his wife, Revital. The rumor mill has her affiliated with the radical left-wing organization Machsom Watch — comprised of women opposed to the occupation. Even though no one in the organization knows Revital Gantz, and the claims about her have been repeatedly denied, senior Likud officials are still at it. The latest was Akunis, who repeated the claim during a Jan. 6 radio interview. Right-wing propagandists have turned Revital Gantz, an educator, former army officer and social activist, into an enemy of the people. Truth be told, there would have been nothing wrong in being a member of Machsom Watch, a legal organization dedicated to legitimate political goals. But in a world in which being a leftist is synonymous with being a traitor, the Gantzes are learning the hard way how an uninhibited political war feels.

For now, Gantz is still silent. His new party issues general announcements saying, “The people of Israel need a different leadership.” Will Gantz manage to keep his gloves on and avoid engaging in a political war with Netanyahu for long? Doubtful. Most of Gantz’s potential voters are affiliated with the center-left. These voters are seeking an alternative to the current regime, but Gantz has embarked on a course designed to attract moderate right-wing voters. He has avoided attacking the Likud and is trying to create the image of a defense hawk with a right-wing orientation. That was fine up to a certain point. Now Gantz needs to take a stand vis-a-vis the prime minister and fight. That is the only chance he stands.