The courageous statement by former IDF Chief Benny Gantz about amending the nationality law brought the issue back to the public agenda and to the election campaign. 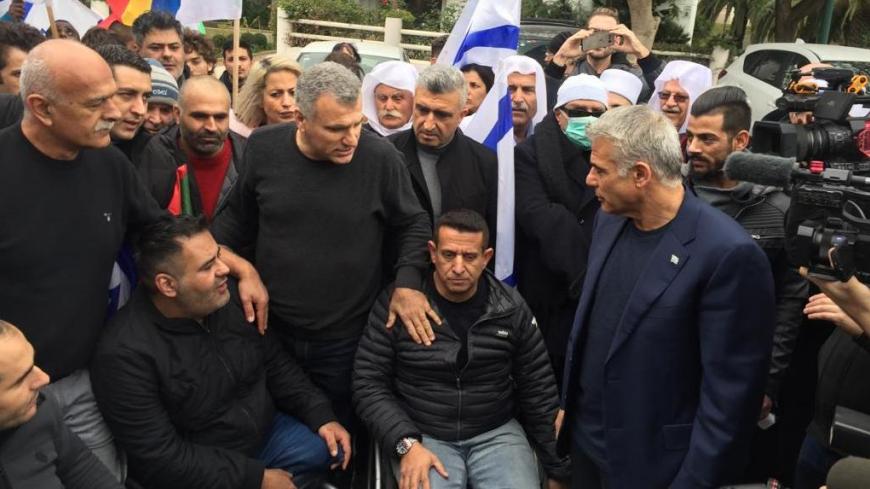 The head of the National Resilience Party, former Chief of Staff Benny Gantz, stepped out of his home on Jan. 14 to address the Druze activists demonstrating outside. He promised them that he would work to amend the controversial nationality law (anchoring the Jewish nature of the State of Israel). Then he went back inside and momentarily resumed his silence. He may have been taken aback by the vicious attacks that right-wing parties, led by the Likud, organized against him. He was lambasted almost as soon as he opened his mouth with claims that by saying what he said (against the nationality law), he had revealed his true colors and exposed himself as a “leftist.” In the 2019 election, the term “leftist,” more than ever before, had become synonymous with the betrayal of national values. It doesn’t matter if the person in question is a former chief of staff who spent most of his adult life in a combat position in the IDF.

The Likud had been waiting for its chance to paint Gantz as the leftist du jour as soon as he stood out in the polls as the only candidate to challenge Netanyahu when gauged for suitability to serve as prime minister. Furthermore, his military past posed a threat by making him an attractive candidate to the soft right. However, as long as Gantz maintained his silence as part of a strategy to position himself (like late Prime Minister Yitzhak Rabin) as a centrist with right-wing tendencies, the Likud had a hard time attacking him. But when Gantz met with the Druze demonstrators waiting outside his home in Rosh HaAyin, that was the green light that the right had been waiting for. Knesset members and ministers alike used his remarks to condemn him. Gantz wants to amend the nationality law, they warned. That means he’s a leftist.

Gantz did not speak much. He did not repeat campaign slogans. It was obvious that his remarks came from the heart and he really believed in what he said. “I will do everything I can to amend the nationality law. We have a blood pact, but more than that, we have a life alliance. We must strengthen the partnership between us,” he told the demonstrators.

While some on the left expected Gantz to go all the way and announce that he would overturn this discriminatory law, he is now a full-fledged politician with strategic consultants and electoral constraints. That is why he chose the middle road. Nevertheless, last Monday will long be remembered as the former chief of staff’s first baptism by fire in his new political life.

Gantz’s decision to speak out on a controversial subject, especially after such a long silence, was not something he just pulled out of a hat, even if the circumstances made it seem like this was a makeshift event. Actually, it was a well-planned media event, intended to allow him to voice his opinion on a major topic. Here was his chance to break his long silence, which was starting to become a subject of ridicule and was wearing away at his poll numbers. In any event, Gantz may not have spoken to the press since Monday, but what he said then turned the nationality law into the litmus test of the current election (with negotiations with the Palestinians becoming less and less relevant over the years, given the diplomatic stalemate and the sense among large swathes of the public that there is no one to talk to).

Gantz and his advisers took a big risk when they decided to open his election campaign by expressing reservations about the nationality law. The polls all show that most of the country’s Jewish population actually supports the law. What this means is that it is not just a banner issue for the right. A large chunk of voters in the political center is content to let the law stand and even connects to it emotionally in some way. A more precise analysis of the polls shows that most people on the center-right support the law, identify with it, and use it to define themselves as patriots and Zionists.

According to an updated poll released Jan. 16 by Channel 12, Gantz stands to win 12 seats, while the Likud will grow stronger and win 32 seats. This is hardly good news for Gantz — the man considered to be Netanyahu’s main rival in the battle for the prime minister’s office. Gantz may have even lost voters from the soft right.

While his public declaration about the nationality law did not propel him forward, it did turn the controversial law into a key issue in this election. Gantz’s statement set off a chain reaction, the main result of which was rare unity among the center-left camp over a single banner issue and key matter of principle. He may have come under heavy fire for it, but that is because he is considered to be the greatest threat to Netanyahu.

Having led opposition to the law in the current Knesset, Hatnua Party Chair Tzipi Livni congratulated Gantz for his remarks. She went on to promise that after the election, she would fight to turn the 1948 Declaration of Independence into a Basic Law (Israel has no constitution, but a set of basic laws), which would emphasize those characteristics of the State of Israel as the state of the Jewish people, with full equality for all of its citizens. She even announced that this would be her first task after the election.

But it wasn’t just Livni who raised the banner of opposition to the nationality law. Jan. 16 was a blustery winter day when Druze demonstrators showed up outside the homes of Yesh Atid Chair Yair Lapid and Labor Party Chair Avi Gabbay. The two men live close to each other in the well-to-do neighborhoods of northern Tel Aviv. Both men hosted the leaders of the Druze activists in their homes, took photos with them and promised that they would also amend the nationality law. “I am ashamed that Israeli citizens, fighters, bereaved parents and IDF disabled veterans should go from house to house to ask for the most basic thing: equality," Lapid told them. The same ritual immediately repeated itself when Gabbay made a commitment to Druze representatives that he would lead the struggle to change the law by adding the word “equality” to it.

Ever since it was passed in July 2018, the nationality law has raised a public uproar, culminating in a mass demonstration in Rabin Square in Tel Aviv on Aug. 11, 2018, which drew tens of thousands of protesters. Yet over the past few months, the issue has been pushed to the margins of the public agenda, even though it is a Basic Law, which infringes on the principle of equality and contradicts the Declaration of Independence. This week, the law re-entered the public discourse in a big way. Only time will tell if Gantz made a big mistake by relating to this controversial law as he did. What is certain, however, is that he set the national agenda and connected it to his own worldview while refusing to obfuscate it. That’s called leadership.