Having come under harsh criticism from the right, the chief of staff during Operation Protective Edge, Benny Gantz, indicates in a video clip that he took pride in returning Gaza to the Stone Age. 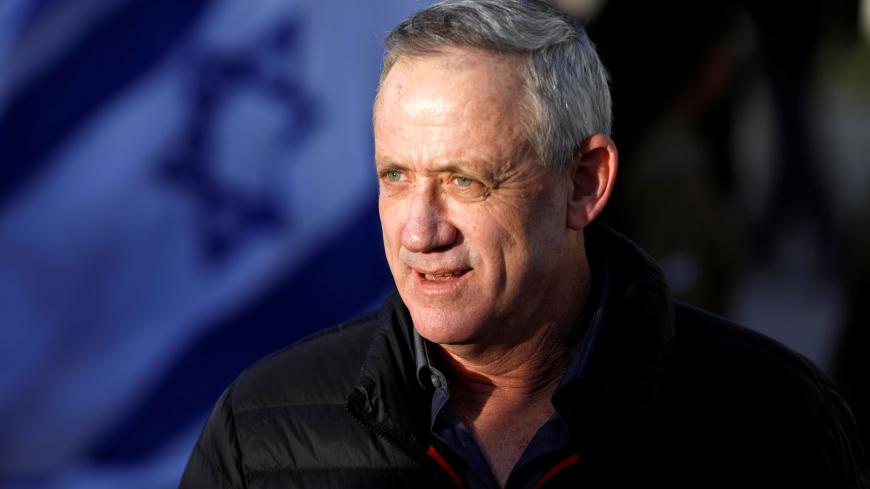 The Israeli political system long waited to hear from former military Chief of Staff Benny Gantz. This brand-new Israeli politician who just founded the Israel Resilience Party has appeared in the polls as the greatest threat to Prime Minister Benjamin Netanyahu’s long-standing domination of the government. And yet, despite all that, Gantz was politically silent. It was only last week that he made a rare public statement, after Druze activists appeared outside his home to protest the discriminatory Nationality Law. He promised them that he would work to amend it.

Then, on Jan. 20, the heads of his campaign released four promotional video clips. His voice came across as so surprisingly powerful (in an aggressive manner) that many of those who thought he was a different kind of politician or that he marked the “dawn of a new age” walked away feeling disappointed.

The first video showed the 2012 killing of Ahmed Jabari, the head of the military wing of Hamas, in an airstrike. Jabari was responsible for the abduction of Israeli soldier Gilad Shalit. After Jabari's car goes up in flames in the video, a slogan appears onscreen, saying, “Only the strong will win.”

The third video is even more disturbing. It opens with aerial footage of Gaza in ruins in 2014 after Operation Protective Edge. Then we hear Gantz’s voice boasting that “6,231 targets were destroyed,” followed by, “Parts of Gaza have been returned to the Stone Age.” Some of the footage in this clip also documents the devastation in Gaza’s Rafah after “Black Friday,” on which Israeli officer Hadar Goldin was killed and his body was captured. Then-Col. Ofer Winter, who commanded the Givati Brigade, at the time ordered his troops to activate the Hannibal Protocol (a controversial military order that grants troops broad permission to do whatever is necessary to prevent the kidnapping of a fellow soldier) and entire neighborhoods in Rafah were bombed indiscriminately.

A report released by Amnesty International one year after the operation determined that Israel had committed war crimes. According to the report, at least 135 Palestinian civilians were killed by Israeli fire on that same Black Friday, and the Abu Yousef al-Najjar Hospital was bombed, forcing patients to flee with their infusions. Furthermore, several 1-ton bombs were dropped on a single-story building, even though there were dozens of civilians nearby.

But it wasn’t just in Rafah that civilians were killed. According to official figures put out by the Israel Defense Forces (IDF), some 2,125 Palestinians were killed during Operation Protective Edge, including 369 children beneath the age of 15 and 284 women. A report by B'Tselem claims that 1,391 of the Palestinian dead were civilians, and says it found that only 765 of those killed actually took part in the fighting.

Operation Protective Edge lasted 50 days, making it the longest military operation in the IDF’s history. When it was over, Hamas boasted that its fighters had defeated the stronger and better equipped IDF. There can be no doubt that Hamas is also responsible for the bloodbath in Gaza. The movement’s leaders rejected an Israeli proposal to reach a cease-fire after the seventh day of fighting — and before IDF ground forces entered Gaza. Responsibility for the tragedy that Gaza experienced and continues to experience lies with Hamas, whose leaders expelled the Palestinian Authority in a military coup in 2007 and have since made promises to the people of Gaza that they have no way of keeping. Many residents of the Gaza Strip have long grown frustrated by these false promises from Hamas. They no longer believe that the day will come when the Hamas army and all the others aligned in the muqawameh (resistance) will eradicate the State of Israel. Meanwhile, they are groaning under the burden of a war of survival forced on them by the movement.

Gantz’s political campaign is wrapped in the human tragedy suffered by 2 million Palestinians. He boasts about how he had returned the Gaza Strip to the Stone Age. The Israeli public was eager to hear the ideas of Gantz the politician, but instead received shocking wartime videos from him.

By the way, it should be noted that in his fourth clip, Gantz talks about peace. It features archival footage of Prime Minister Menachem Begin with Egyptian President Anwar Sadat, and Prime Minister Yitzhak Rabin with Jordan’s King Hussein. Then Gantz the candidate declares, “I am not willing to see another generation living here with no prospects of peace.” But Gantz’s great hope wound up being concealed by billowing smoke and the sounds of war from his first three video clips.

What caused Gantz to launch his election campaign this way? Why did he chase away countless potential voters who thought that this general would bring a message of hope? It seems as if the chief of staff during Operation Protective Edge wanted to respond to his critics. Last week he was attacked by retired Maj. Gen. Yoav Galant, who recently joined the Likud. Galant went so far as to accuse Gantz of failure during Operation Protective Edge. “I think that he knows why he is silent. I also know why he is silent, and the thousands of officers who served under him know why he is silent,” Galant said Jan. 5.

After Gantz announced he planned to form a new party and run in the upcoming election, he was ridiculed and classified as a leftist last month by Prime Minister Benjamin Netanyahu. This is the most humiliating term in Netanyahu’s lexicon. “I will not get involved in how the left plans to split up its votes,” Netanyahu mocked his political rival, and apparently it worked. To defend himself, Gantz presented his voters an image of Gaza on a silver platter, all covered with blood and dust. What matters most to him, it seems, was that his reputation not be tarnished, and that he not be suspected of belonging to the left.

The Palestinians do not consider Gantz to be any different as a leader than the current right-wing leadership. An active member of the political branch of Hamas in the Gaza Strip told Al-Monitor on condition of anonymity that he wonders why Israelis were so surprised by Gantz’s video clips. “As far as we are concerned, he is responsible for the massacre in Gaza,” the Hamas member charged, adding that the people of Gaza and the Palestinian people in general have no expectations from the Israeli leadership. In another conversation with Al-Monitor, a journalist in Gaza who is well-versed in Israeli politics said he is saddened to see that this is how a candidate hopes to win votes. “We are suffering from closure, from hunger and from death, which constantly hovers over us, and you are shouting in joy,” he said, speaking on condition of anonymity. “How is he [Gantz] any different from Netanyahu and [former Defense Minister Avigdor] Liberman?”

Meanwhile, Knesset member Ahmad Tibi quit the Arab Joint List and announced his plans to run in an independent Ta’al list. He tweeted: “I watched Benny Gantz’s videos with the body count, and I felt sick. Anyone who turns killing, destruction and devastation into a political tool is no different from the most aggressive right-wing leaders. That is no way to build an alternative.”