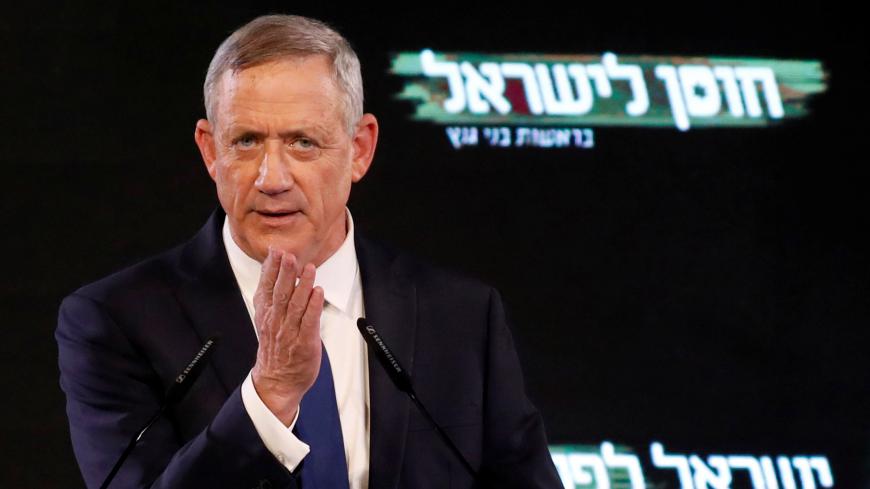 The liberal left-wing media threw massive support behind Benny Gantz after his maiden political speech Jan. 29. Haaretz, the flagship newspaper of the Israeli left, devoted an editorial, commentary and numerous reports to Gantz, describing him as a fitting “alternative” with a good chance to defeat Prime Minister Benjamin Netanyahu. The paper even rose to the challenge of defending Gantz from attacks on his Achilles’ heel, i.e., his handling as chief of staff of Operation Protective Edge in 2014 and the way he was late in tackling the problem of the Hamas terror tunnels. The paper’s military commentator determined that the political leadership, meaning Netanyahu, was a full partner in everything attributed to Gantz.

Support for Gantz is based in the belief that he has a chance to take down Netanyahu, the greatest enemy of the Israeli left. But by coronating Gantz as the leader of their bloc, the center-left is making a basic mistake. Lt. Gen. Gantz (Res.) is far from being a dove, and he has proved as much over the past few weeks with his messages, speech and deeds. Actually, Gantz has positioned himself on the right-wing flank of the Likud in almost every issue he raised in his speech. The only exception was his position on matters of religion and state.

This was already apparent in the first videos released by Gantz’s staff about two weeks ago. These included a clip of the 2012 assassination of Ahmed Jabari, the Hamas military commander in the Gaza Strip. The clip also boasted about the large number of Palestinian casualties during Operation Protective Edge and showed images of how the Israel Defense Forces (IDF) “flattened” entire neighborhoods in Gaza during that operation.

These aren’t exactly the kind of messages that appeal to the Israeli left. Yet in his speech this week, Gantz was even more blunt; he warned Iranian President Hassan Rouhani that he would take action against him on all fronts and deliver devastating blows to his country. Later in his speech, when speaking about Gaza, Gantz even outflanked Netanyahu on the right by suggesting to Hamas leader Yahya Sinwar that he better not “test him.” It was the kind of bellicose statement frequently heard from Netanyahu and his former Minister of Defense Avigdor Liberman. He then attacked Netanyahu for allowing Qatar to transfer money to Gaza, saying, “I will not allow the payment of protection cash payments in suitcases to murderous gangs under the disgraceful protection of screaming Cabinet members.” He then warned the Hamas leadership that the policy of targeted killings, halted by Netanyahu, would resume once he is in power.

Gantz is adopting positions taken by parties to the right of Netanyahu, even if these conflict with the positions of the army, which he headed until four years ago. It was the IDF, for instance, that recommended to Netanyahu that he should allow the transfer of money from Qatar to the Gaza Strip for humanitarian purposes. It is also fairly safe to assume that had he been prime minister or defense minister, Gantz would have accepted the military’s position on the matter.

Similarly, most people aligned with the Israeli right could identify with Gantz’s positions on diplomatic issues. He declared that a government under his leadership would strengthen the settlement blocs and keep the Jordan Valley as Israel’s eastern border. Furthermore, he would not allow the Palestinians to put Israel’s security or its Jewish character at risk. He passed the right’s test on Jerusalem as well, saying, “United Jerusalem will be built, will grow and will remain forever the capital of the Jewish people and the capital of the State of Israel.” Still, Gantz did make a gesture to the left, when he said that he would not allow millions of Palestinians to endanger neither Israel’s safety, nor its Jewish identity. By stating that he would guarantee Israel’s Jewish nature/majority, he was insinuating that he objects to the annexation of the West Bank.

A significant reason of his success so far is his nonpartisan approach (beyond party divide), combined with a message of unity. Gantz promised to establish a government "of the people" that will "govern to unite." All the contrary of current politics, which he qualified as ugly and poisoned. In fact, he had relayed a sense of a clean path, similar to the political center’s attitude when trying to differentiate themselves from the political camps on the right and the left. Unlike them, Gantz argued that he will fight for the interests of the state, regardless of the interests of the parties.

The argument that this was nothing more than an election speech and that it does not reflect his true positions was disproved when Gantz refused to let Hatnua head Tzipi Livni, who is identified with the Israeli left, join his list. Similarly, he did not agree to consolidate forces with Avi Gabbay and the Labor Party. Instead, he joined forced with the Telem Party of Netanyahu’s old Defense Minister Moshe Ya’alon, a former member of the Likud and a diplomatic hawk. Ya’alon brought two former Likud-members with him: Yoaz Hendel, a former media adviser to Netanyahu, and Zvi Hauser, Netanyahu’s former Cabinet secretary. Both men are clearly aligned with the right, even if they are more liberal in their leanings than the current Likud Party. As an example of their right-wing bona fides, Hauser is currently working on obtaining international recognition for Israel’s annexation of the Golan Heights. Gantz even mentioned this in his speech, taking a decidedly right-wing position when he said that Israel would never descend from the Golan Heights.

Gantz practically ignored the issue of Israel’s Arab population and the way they are treated, another touchstone for the Israeli left. All he did in his speech was lump them together with the ultra-Orthodox and the Druze, saying, “I will deepen my partnerships with the ultra-Orthodox, the Arabs and the Druze." He also addressed the issue indirectly, when he promised to expand national civic service alongside military service. (Israeli-Arabs for the most part do not serve in the army.)

Actually, it was only on matters of religion and state that Gantz expressed positions different from the right-wing parties. He announced his willingness to allow public transportation on the Sabbath in secular settlements and to allow civil marriages, rather than only religious marriages as required now by law. He also said that he would promote the Western Wall compromise to make the site accessible for pluralistic religious services, and in general, that he would work to bring all branches of Judaism together. The leaders of American Jewry will certainly be happy to hear this position, given the ongoing rift between them and the prime minister on these very matters. The crisis between Israel and the non-Orthodox branches of Judaism is one of the reasons that American Jewry, particularly the younger generation, has been distancing itself from Israel.

His decision to express views that would be unwelcome to the ultra-Orthodox community makes sense given the belief among Gantz and his advisers, as told to Al-Monitor, that they would be able to form a coalition without the ultra-Orthodox bloc. The decision also helps him gain votes from the secular center, which is Yair Lapid’s traditional base. In fact, polls taken one day after the speech show that Gantz took anywhere from 3 to 6 seats from Lapid.

Gantz is not a leftist. The conclusion is unavoidable, based on his actions and his speech. The opinions he expressed tend mainly to the right, with just a few positions leaning toward the center. The fact that the media and left-wing voters support him stems mainly from the possibility that he could form the next government instead of Netanyahu, or at least put up a good fight. His clean image of an honest man, contrary to Netanyahu’s entanglement in various affairs, increases his popularity. On the other hand, if he does form the next government or joins the next coalition, it is doubtful that Gantz will fulfill the hopes and expectations of the Israeli left.