With former military chief of staff Benny Gantz soaring in pre-election polls, the conduct and results of Operation Protective Edge, the 2014 military campaign against Hamas in Gaza, is back on the public agenda. 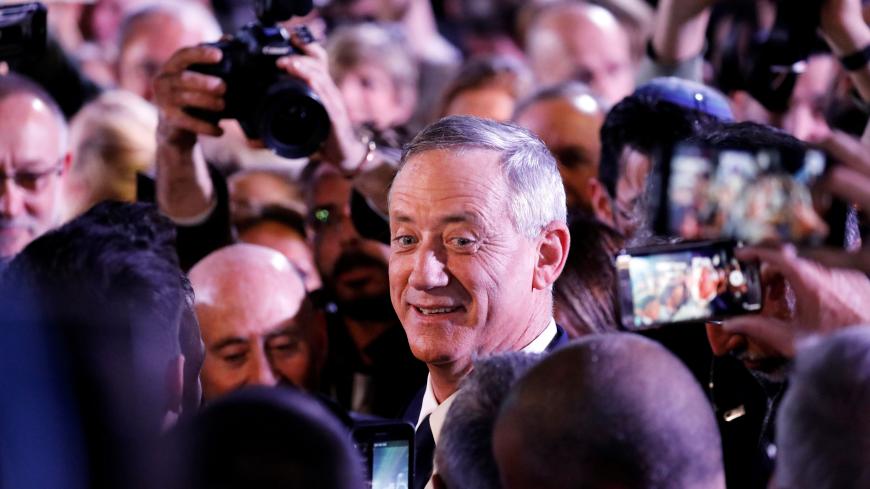 Benny Gantz, a former Israeli armed forces chief of staff and head of Israel Resilience, arrives to deliver his first political speech at the launch of his campaign for the premiership, Tel Aviv, Jan. 29, 2019. - REUTERS/Amir Cohen

Israel is the only place where a military operation that occurred almost five years ago could resurface and feature in a crucial election campaign, with the army and defense chiefs who commanded it — both running for high office — coming under intense fire from the politicians who directed them. The fallout from Operation Protective Edge continues.

Prime Minister Benjamin Netanyahu and members of his Security Cabinet have recently launched harsh attacks against Lt. Gen. (res.) Benny Gantz, the former military chief of staff now running for the premiership, and his running mate and former defense minister, Lt. Gen. (res.) Moshe Ya’alon. The accusations are absurd, especially given that the accusers themselves had previously declared clear and total victory over Hamas in Gaza.

Netanyahu and his senior ministers are reacting in part to viral videos from social media highlighting pronouncements they made in 2014. In the clips, they are seen praising the military operation and its commanders with the same passion with which they are now vilifying them. Others have also been caught up in the fray, among them former Defense Minister Avigdor Liberman, a cabinet member during that war and now in the Knesset opposition, and Maj. Gen. (res.) Yoav Galant, former commander of the southern front now running in Netanyahu’s Likud. Then there are Education Minister Naftali Bennett and Justice Minister Ayelet Shaked of the New Right, whose current versions of 2014 events consistently contradict what they said at the time.

Gantz, founder of the new party Israel Resilience, saw this coming and launched a pre-emptive strike with three videos posted online. One video documents the horrific destruction wrought on Gaza by the Israeli army under his command, with a counter adding up the number of Palestinian “terrorists” killed, stopping at more than 1,300. Another shows images from the 2012 killing of Hamas military commander Ahmed Jabari by the Israel Air Force, which was also under Gantz’s command at the time. For the sake of balance, and to snag the support of center-left voters, the other video has Gantz saying that Israel must keep striving for peace.

The clips did the job. They boosted Gantz’s standing in the polls — from voter support equaling 11 Knesset seats to 15 seats, even before he officially declared he would run for the premiership, and then to more than 20 seats after the Jan. 29 speech launching his campaign. In response, Netanyahu’s entourage sent the word for the Likud to ramp up attacks.

Lacking other damning material, the broadside against Gantz has focused on his conduct as the country’s top soldier in general and especially during the 2014 Gaza war. Operation Protective Edge, the Israeli campaign during the war, lasted 51 days, during which time Hamas fired thousands of rockets at Israel, including Tel Aviv. Gaza sustained extensive damage, and the Palestinians thousands of deaths and injuries, but the fighting ended in a draw, not a knockout.

The Israel Defense Forces (IDF) did not conduct a significant ground campaign in Gaza, like it did in Operation Cast Lead at the end of 2008. Instead, it carried out a limited operation to destroy tunnels dug by Hamas into Israel to use for attacks. The performance of the military, Security Cabinet, Prime Minister Netanyahu and Defense Minister Ya’alon came under harsh public criticism and an especially tough assessment by the state comptroller.

Now the protagonists of that campaign find themselves engaged in another round of fighting, this time confronting each other from opposing trenches. Netanyahu is being forced to criticize the operation that he led and misleadingly hailed as a triumph. Ya’alon and Gantz are having to justify themselves. Bennett and Shaked are trying to score points at all the others’ expense, forgetting that when the fighting stopped, they too had heaped praise on the IDF and its commanders for their performance and achievements.

In this fight, the combatants are highlighting what their comrades said at the time compared to what they are now claiming as rivals. The public is confused: Which of the contradictory statements are true, and which are not? When do the officials mean what they’re saying, and when do they not?

Netanyahu is vulnerable and worried about Gantz’s surge in the polls. For the first time in a decade, someone other than himself seems to be scoring high marks and has even achieved near parity in the most important area of all – suitability to serve as prime minister. Previous Netanyahu rivals, among them former Labor Party Chair Isaac Herzog and current Yesh Atid leader Yair Lapid, never came close to Gantz’s current poll numbers.

Almost overnight, Gantz catapulted from a one-digit suitability rating before he officially announced his candidacy to a virtual draw, at 42% afterward, according to a Channel 13 News poll. This dramatic shift, making this period particularly fateful for the election campaign, led Netanyahu to order a full-scale assault on Gantz’s soft underbelly — allegations about his performance in the 2014 war and in general.

Netanyahu was prime minister during the operation and has worked hard in the ensuing years to explain just what a heroic victory he and the IDF had achieved. He also extended Gantz’s term for a year, heaping praise on him at the war's outcome and again after Gantz left the army. Netanyahu declared repeatedly how the IDF had vanquished Hamas and how Israeli fighters had displayed superiority and a wonderful fighting spirit. Such praise is now coming back to bite Netanyahu as he authors a new version of events to the sounds of cheering supporters.

Gantz has adopted a calm, business-like strategy, sticking to laconic responses, no more than a few words at a time. In fact, he barely needs to react. Social media are doing it for him through the video clips. In fact, Gantz’s mission is more complex than merely slinging mud at the other side.

Gantz has chosen not to conduct a negative campaign, for now. Instead, he is trying to position himself as “all things to all people.” On the one hand, he is a military hero, a commander who eats Arabs for breakfast and a defense hawk who can step into Netanyahu’s shoes as Mr. Security. On the other hand, he is a moderate leader, sober and peace loving. In the Israel of 2019, Gantz still needs these latter traits to attract voters from the political center-left.

With that in mind, Gantz’s greatest asset is positioning himself as the leader of the anti-Netanyahu camp. This sizeable Israeli tribe, which can no longer stand Benjamin Netanyahu, will whitewash Gantz’s sins and ignore any lapse or wild veering to the left or right just as long as he defeats Netanyahu.

That is the state of affairs, for now. What was at the start a campaign featuring one outstanding party, the Likud, against a gang of downtrodden parties has turned into a two-player challenge: Bibi versus the anti-Bibi.

To complicate matters, Attorney General Avichai Mandelblit has decided to announce his decision on whether to indict Netanyahu for corruption before the April 9 elections, rejecting Netanyahu’s demand to postpone the announcement until after the balloting. If Mandelblit announces a decision to indict, the campaign conducted thus far, including the allegations over Operation Protective Edge, will seem like child’s play. It will be a very different type of war, hopefully one that the public can withstand.