The Raqqa Civil Council and a local organization have begun restoring the Museum of Raqqa, but it is unclear whether it can reassemble the treasures removed from it during the occupations by Islamic State and the Free Syrian Army. 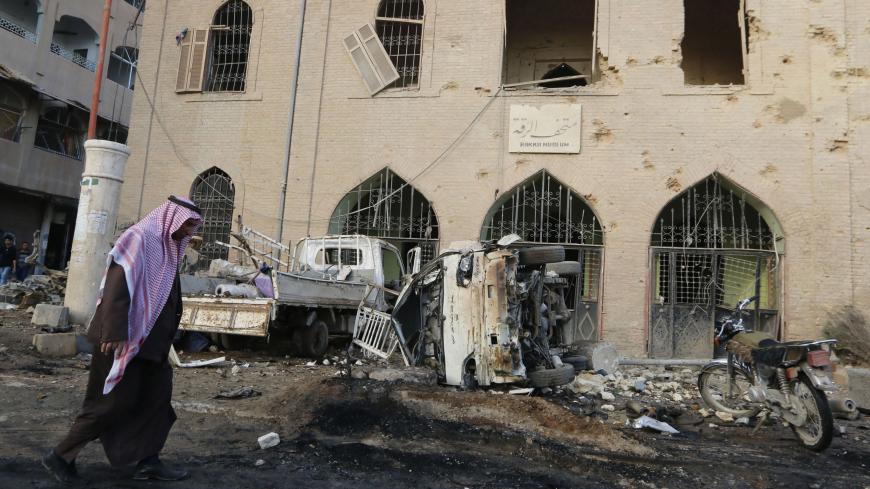 A man walks past the Museum of Raqqa, damage by airstrikes, in Islamic State-controlled Raqqa, Syria, Nov. 25, 2014. - REUTERS/Nour Fourat

Once home to a major collection of archaeological artifacts from Assyrian times to the Islamic era, the Museum of Raqqa is barely a pale shadow of its former self. All that remains in the 19th-century building in the war-torn city on the northeastern bank of the Euphrates are some pottery, a couple of destroyed mosaics and two ancient tombs whose contents have been emptied by looters.

While finding the looted antiquities will be a long, ongoing project, efforts are currently afoot to renovate the damaged building. The Roya (Vision) Organization, a civil society group, worked on the building's rehabilitation during the second half of 2018 with assistance from Raqqa's Civil Council.

During the first phase of the project, from June through November 2018, Roya cleaned the museum’s burnt interior and repaired the damaged exterior. Interior and exterior walls were painted, holes patched with clay bricks and the floors and pathways laid with clay flagstones. The next phase of the project has been approved, but the start date is unclear given the uncertainty in the area created by President Donald Trump’s decision to withdraw US troops from the country.

Islamic State (IS) captured Raqqa in January 2014 and made it the headquarters of its so-called caliphate. The group held the city for three years, until the city’s liberation in October 2017. The current sad state of the museum is symbolic of the destruction wrought on the city itself, the home of such monuments as the the ancient wall around the Old City and the Baghdad Gate.

“Before the Syrian revolution in March 2011, the museum displayed about 3,000 artifacts,” Yasser al-Mahrab, head of the Antiquities and Museums Office of the Civil Council, told Al-Monitor. “What remains now in the museum is not even one-tenth of what was there before 2011.”

Mahrab continued, stating, “Parts of the museum were destroyed during the battles of the [US-led] alliance and the Syrian Democratic Forces against IS [in liberating the city]. The destruction and theft of artifacts from the museum did not only occur when IS controlled Raqqa. The museum was also stormed and looted by the armed opposition factions, when the Free Syrian Army (FSA) entered the city in 2013.”

“The structure of the museum in Raqqa dates back to 1861,” said Mahrab, offering insight into the museum's history. “Under the Ottomans it served as a governmental building. Under the French mandate, it became a sarai [palace]. It became the Museum of Raqqa in 1981. With its stone walls as thick as 70 centimeters [27.5 inches], the two-story building has a structure similar to the forts and castles of the Rashidun era. The central hall is 811 square meters [8,730 square feet].”

Izzat al-Mawh, who heads Roya, told Al-Monitor that some of the museum's artifacts were looted when the opposition factions controlled Raqqa. Ziad al-Hamad, co-vice chair of the Culture and Antiquities Committee of the Civil Council, told Al-Monitor, “The FSA stole the largest amount of artifacts from the Museum of Raqqa.”

Mahrab affirmed that the Civil Council was working hard to track looted and smuggled items and trying to determine whether some missing objects were stored for safety by Syrian government officials, as occurred in other places in eastern and northern Syria, where antiquities were secured before the fighting started.

For instance, a 2015 article on the news website Asharq al-Awsat quoted Yacob Abdallah, former director of the Antiquities Department for Deir ez-Zor, as saying, “We packed everything within a week, with the help of two colleagues. We loaded them on a truck and tried to save them from being bombarded.”

In the past, the Museum of Raqqa had housed priceless Assyrian cuneiform clay tablets, gold jewelry and colorful mosaics. Mawh told Al-Monitor that when restoration of the museum building began, pieces of pottery were among the few things left inside, and IS had smashed most of those.

“There were [also] three paintings [by local painters] that were sprayed by IS,” Mawh said. “The first portrayed a woman, the second showed the Euphrates River, and the third depicted animals. Two empty archaeological tombs were also left by IS, but emptied of the contents. One was inside the museum and the other in the back garden.”

Mawh noted how IS had sought to destroy the city’s culture and heritage and that the museum, with its pre-Islamic antiquities, was an important symbol of that history. To IS, the museum was a place “where pagan idols were collected and stored.” Assyrian statues in particular became targets of the group's rage at the museum.

“IS rented out the museum premises,” Mawh said, highlighting the other ways in which IS expressed its disdain for the institution. “It gave the backyard to a contractor, who installed a large power generator to supply neighborhoods with electricity. It also rented the back part to someone who turned it into a shop selling washing machines, refrigerators and electric tools. The central and front parts were also leased and turned into a butcher shop.”

Mawh believes IS wanted to send a message to Raqqa’s residents by destroying the museum and attacking its symbolism. The extremist group broadcast photos and videos showing the destruction of the museum's antiquities. “Before its defeat in Raqqa, IS burned the interior of the museum and damaged the facade.”