Hard-liners attack Rouhani over outreach to Europe on JCPOA

Iranian hard-liners show no sign of compromise with moderate President Hassan Rouhani, reigniting their attacks on him for his push to maintain the Joint Comprehensive Plan of Action. 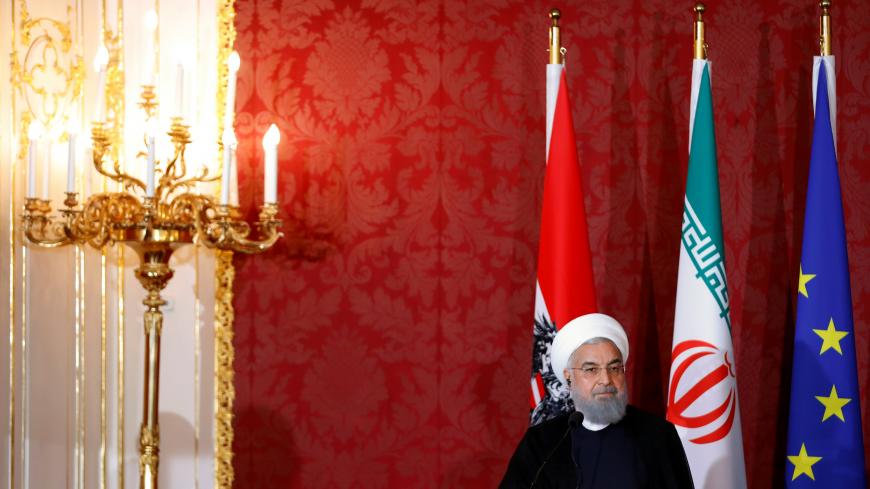 Ever since President Hassan Rouhani's government signed the Joint Comprehensive Plan of Action (JCPOA) with six world powers in July 2015, little domestic consensus has materialized over the deal — which has aroused concern, criticism and accusations from his relentless hard-line rivals. The heated debate over whether the decision to strike the accord was right has now resurfaced as conservatives find the government an easier target following the May 2018 US withdrawal from the agreement.

The latest attack comes from a man who himself once led unsuccessful nuclear negotiations with the West under former hard-line President Mahmoud Ahmadinejad. Saeed Jalili (2007-2013) was addressing a Dec. 17 conference in Tehran, which commemorated Mustafa Ahmadi Roshan, one of the nuclear scientists Iran says was assassinated by Israeli agents in 2012. Admiring the "martyr," Jalili could not withhold sarcasm against the Rouhani government. "Our nuclear martyrs are great in that they did not idolize the West. They died for our nuclear rights, but certain people deprived the country of its right to nuclear research and development upon requests from the West."

Following US President Donald Trump's withdrawal from the JCPOA, Iran has been in close negotiations with the European signatories to the deal to salvage the pact. The Rouhani administration is now awaiting a payment mechanism known as the Special Purpose Vehicle (SPV), which is meant to facilitate Iran-Europe business and circumvent US sanctions. But casting doubt and pessimism on the SPV, Jalili repeated the broader stance of conservatives about mistrust in Europeans and advised the Iranian government not to "waste the country's time for seven months only to see whether they [Europeans] will ratify it [the SPV] or not."

In addition to pursuing the SPV, the Rouhani administration has been seeking continued international trade and investment by pushing the Iranian parliament to ratify a bill on CFT (Combatting the Financing of Terrorism), related to its efforts to permanently remove the Islamic Republic from the Financial Action Task Force’s blacklist. Government supporters say that if ratified, the CFT bill would bring about transparency in Iran's banking ties with Europe. But this has already taken the battle to new fronts. In his remarks, Jalili criticized the government for "making scarecrows out of those countries [Europeans]" and bowing to their pressure over the CFT.

Despite parliament's approval on Dec. 5, the fate of that bill is now hanging in the balance. The powerful supervisory Guardian Council has sent part of the document back to lawmakers for revisions, who have in turn refused to make changes. The Expediency Council, responsible for resolving disputes between the two sides, has now taken up the matter. But the Expediency Council's secretary, Mohsen Rezaei, has explicitly confirmed the Guardian Council's argument that parts of the bill violate the Iranian Constitution. The legislation, however, has yet to be decided by the Expediency Council's collective vote. On this matter, the Reformist chairman of parliament's National Security and Foreign Policy Commission, Heshmatollah Falahatpisheh, insists that the likelihood of the bill’s approval is higher than rejection.

Moderates and Reformists, on the other hand, are sticking to their guns. "We acted with complete wisdom and righteousness by deciding to sign the JCPOA," said Ali Akbar Nategh-Nouri, a heavyweight politician, former parliament speaker and close ally of Rouhani. Elsewhere, Hessamoddin Ashna, a top adviser to the president, hailed the JCPOA as "a valuable asset for regional peace and stability."

Despite the intense sniping, there are important voices in favor of solidarity. "The country's problems can be resolved through consensus," said one of Tehran's Friday prayer leaders, Mohammad Hassan Aboutorabifard. "If the [Rouhani] government had spent on national consensus only half of the time it allocated to negotiating with the outside world, the JCPOA would have been much better off now."