While many economists are praising Egypt's major development projects in the fields of energy, agriculture and transportation, others are warning against the unprecedented debt the country faces due to such projects. 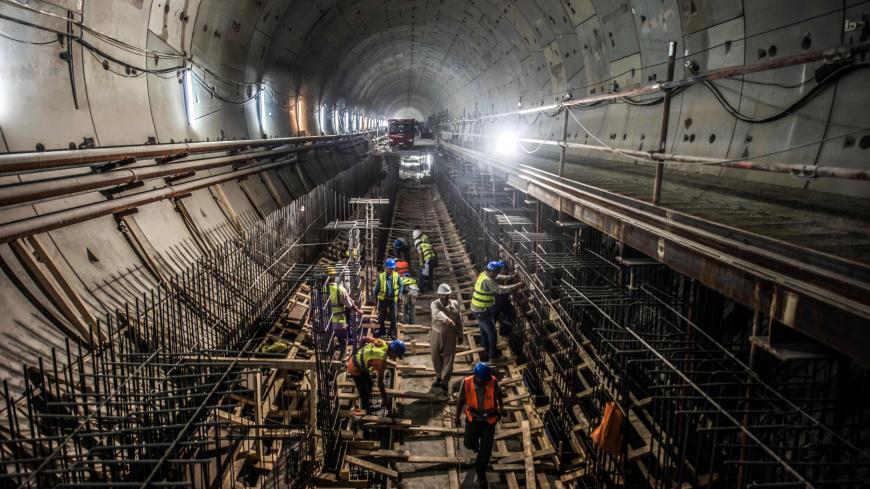 CAIRO — As Egypt accepts more and more development dollars from other countries, economists worry that its debt has reached a dangerous level.

The deal was signed in July between Egypt and the Kuwait Fund for Arab Economic Development. The parliamentary commission tasked with studying the agreement recommended in its Dec. 3 report to parliament that President Abdel Fattah al-Sisi approve the agreement. A final parliamentary vote is expected before the end of the year.

The Bahr al-Baqar (Cows' Sea) drainage system aims to establish a huge wastewater desalination station to process 5 million cubic meters of wastewater per day. This volume would be enough to irrigate 250,000 acres in Sinai desert. The desalination station is expected to be the largest in the Middle East, as it will dwarf the Saudi Ras al-Khair station, which desalinates around 1 million cubic meters of water per day.

The Bahr al-Baqar project is not the only one Egypt is banking on to enter the realm of world records. The Armed Forces Engineering Authority had planned to open this month a road tunnel running under the Suez Canal to connect Cairo to Sharm el-Sheikh. The tunnel will be 342 kilometers (almost 213 miles) long — the longest in the world, by far exceeding the Swiss Gotthard Base Tunnel, which is 57 kilometers (35 miles) long. Construction on the six-lane road began in 2017.

Although the engineering authority said the tunnel project would be completed soon, Sisi agreed Nov. 22 to accept another Kuwaiti loan worth 60 million Kuwaiti dinars to finish the road.

The Egyptian government’s inclination to strive for world-record projects in the Arab region, the Middle East and maybe the world, has been coupled with loans worth billions of dollars. For instance, Egypt received a loan worth $460 million from Japan in 2016 to help build the $1 billion Grand Egyptian Museum — which will be the biggest archaeology museum in the world. It also received loans worth 2.5 billion euros ($2.8 billion), from German and Italian banks to establish the Ghayada Power Station in Beni Suef. Siemens, which implemented the power plant project, said it will be the largest in the world.

In March, Egypt received $3 billion from China to build 20 skyscrapers in the new administrative capital, including the tallest tower in Africa. In February 2018, Egypt received another loan, worth $500 million, to help build the biggest oil refinery in the Middle East, in Musturad. That project is estimated to cost $4.1 billion, with $2.9 billion loaned by international banks and $1.3 billion from major shareholders

However, the question arises as to whether entering the realm of word records is worth this amount of debt. Of note, Egypt’s foreign debt has also ironically broken records, reaching $83 billion at the end of May.

Wael Nahhas, an economic expert and financial adviser to several investment bodies, praised the power generation and water desalination stations as well as the oil refineries. However, he told Al-Monitor that Egypt has to take it slow when it comes to decisions related to loans and debts. Egypt’s foreign debts have increased to an insecure level, he said, and the country might not be able to pay them off.

Nahhas added that the government should have limited its debts and expanded the time span for implementing these huge development projects. The government, according to Nahhas, has repeatedly cut subsidies on basic commodities and increased taxes to settle its debt, but even those actions might not be enough. It would have been wiser, he said, to spend such funds on the industrial sector, which would allow Egypt to increase its exports and boost tourism. This, in turn, would bring hard currency into the country.

An economic expert told Al-Monitor on condition of anonymity that Egypt's current political leadership has deliberately implemented big projects regardless of the debt in a bid to elevate Sisi’s name and connect it to projects of such magnitude.

“Since 2014, Egypt has achieved self-sufficiency from three power stations designed and operated by Siemens, and it doesn't need bigger ones," the expert said. "Egypt’s chances to export power to the Middle East or Africa will remain limited compared with Ethiopia once the Grand Ethiopian Renaissance Dam project is implemented. Such chances will also be dim at a time when Israel has massive natural gas reserves to operate power stations.”

The expert conceded that Egypt's infrastructure is deteriorating, but said the country really doesn't need highly developed road networks, as Cairo could have restored the current roads without investing heavily in new ones. Egypt also doesn't need tall towers for its new administrative capital, or the Grand Egyptian Museum, as these projects are just a form of propaganda for Sisi's image and enable countries to earn money by lending Egypt money at high interest rates, he added.

Rashad Abdo, director of the Economic Research Forum, told Al-Monitor that borrowing money has placed both the state and its people under pressure, but this is normal and expected when rebuilding or reforming any economy. Egypt will reap the fruits of such plans once its debts are settled, as these projects will significantly develop its tourism, agriculture, power and industry, he added.

Economic expert Khaled al-Shafei concurred, telling Al-Monitor that the projects will have a positive impact on Egypt. He contends that as high as the debt is, it isn't worrisome, and Egyptian economic leaders are working to reduce loan interest to safe levels.