Led by Turkey’s first and only communist mayor, the small town of Ovacik boasts a flourishing farming cooperative whose organic products have taken customers across the country by storm. 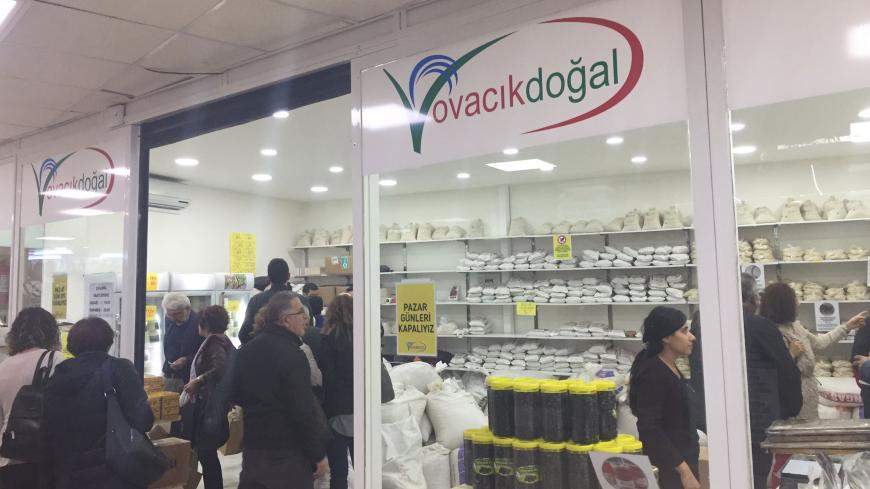 A small grocery store in a tiny town in mountainous eastern Turkey has become an instant success and is now on its way of becoming a nationwide chain. The store, which opened last year in Ovacik in the province of Tunceli, was so overwhelmed with demand from all across the country that four other stores were inaugurated this year in Turkey’s three biggest cities.

The story of Ovacik’s locally produced and natural foodstuffs is about more than healthy nutrition: It's also about politics.

In the 2014 local elections, the voters of Ovacik, which including its surrounding villages has a population of some 8,500 people, elected Fatih Mehmet Macoglu as mayor, making him the first and only Turkish Communist Party member to head a local administration. In line with his party’s ideology, Macoglu focused on developing cooperative farming, launching organic agriculture on 65 hectares of public land with an eye toward producing natural products without any intermediaries and a low profit margin.

Soon, the town’s cooperative was selling haricots, chickpeas and potatoes cultivated naturally without any chemical intervention as well as honey produced by bees feeding on the area’s mountain flora. After a while, it launched online sales, reaching out to the whole country. The products generated such a high demand that the local administration decided to expand to other provinces. Earlier this year, it opened two stores in Istanbul, and recently two more stores in Ankara and Izmir. Preparations are now underway for stores in Adana, Mersin and Bursa.

In an interview with Al-Monitor, Macoglu listed three main reasons for the popularity of Ovacik’s products. “The first is the longing that people who have migrated from the region feel for the products of their native land,” he said. “Second, people are willing to support our municipality because we provide stipends to more than 200 university students from the revenues we earn. By purchasing our products, they offer solidarity. The third reason is the demand for healthy and safe food.”

One could add a fourth reason: the revolutionary nostalgia among veterans of Turkey’s once formidable leftist movement. Ahead of the Oct. 20 inauguration of the Ankara store, veteran leftists in the capital actively promoted the event on social media. As a result, a big crowd flocked to the event, sweeping the shelves clean on the first day.

In a show of solidarity with other farming cooperatives, the Ovacik store in Ankara also offers foodstuffs from other regions, including tea, rice, bulgur, cheese, noodles, jam and molasses.

The number of students receiving stipends from the revenues rose to more than 200 this year from 78 in 2017. Tunceli province is renowned for the importance its people place on education. In 2016, it ranked first among the country’s 81 provinces on the Turkish Statistical Institute's education index, which is based on indicators such as the rate of university graduates and the success of students in standardized exams.

Macoglu stressed that the cooperative’s products are entirely natural. “Seeds, soil, water and sun — there is nothing else,” he told Al-Monitor.

The mayor explained, “All products are analyzed in our laboratory. They meet world standards for natural produce. In fact, the world standard for honey allows 6% of additives such as lactose, fructose and glucose. In our honey, that rate is 0%. The bees collect pollen from 217 different plants.”

During a recent visit to the store in Ankara, Al-Monitor asked customers why they chose to shop there. The most prevalent answer was that they trusted the healthiness of the foodstuffs.

For some, there was also a political message. “Those who have sought to portray communists as godless people with no values should come to shop here and see what a strong business ethic they have. The products are unadulterated and the prices are not inflated,” said shopper Fahrettin Fettahoglu.

Besides the stipends for students, Macoglu said, part of the revenues are used for fuel and seed support for farmers and welfare assistance for the poorest.

The reputation of Ovacik’s products has begun to cross borders. In late October, Macoglu announced the first "introductory shipments" of about seven tons of beans and honey to Britain and the United States. “Our exports will increase. There is demand from many European countries, including Germany and France,” he said.

Macoglu cuts a unique profile in Turkish politics. He does not have an official car, takes a salary lower than those of his workers and personally takes part in the harvesting of the crops.

The mayor, who won the 2014 elections in Ovacik with 36.1% of the vote, has set a more ambitious goal for the upcoming municipal polls. He tweeted Nov. 11 that he will run for the mayorship of Tunceli city, the provincial capital, in the elections scheduled for March.

The success of the Ovacik cooperative comes amid soaring inflation in Turkey, marked by skyrocketing food prices resulting from major setbacks in the country’s agricultural sector, among other factors. With the prices of some basic food items surging more than 100% over a year, Ankara has put the blame on middle men and is reportedly exploring options for a direct interface between farmers and the market. The Ovacik model offers a source of inspiration.