Fatih Mehmet Macoglu, the first and only communist mayor in Turkey, has impressed critics with his hard work and inclusive politics and seems ready to run for a second term. 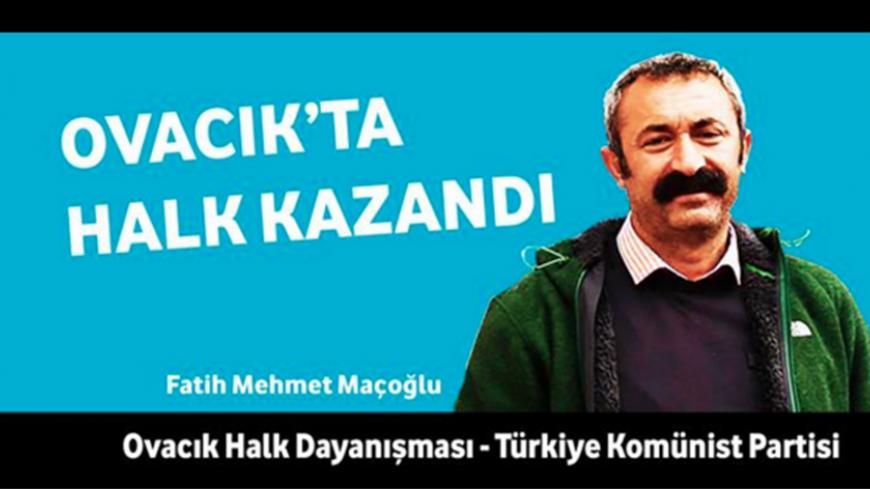 Turkey’s first and only communist mayor, Fatih Mehmet Macoglu, has been making headlines with his unexpected successes. Macoglu is the mayor of the small town of Ovacik in Tunceli province with a population of about 3,300.

Macoglu assumed his post in April 2014, facing great expectations and even greater hurdles. Notably, in the Nov. 1 general elections, Macoglu’s Communist Party did not receive a single vote in Ovacik. This discrepancy indicates that electing a Communist mayor was not an ideological issue for the residents of Ovacik. The choice was about Macoglu, his passion for service, his determination to help the people and his humility. He is a communist who genuinely praises democracy.

Macoglu campaigned with the slogan “We will make the decisions with the people,” and he has. He is a patient and careful listener who takes the views and suggestions of the people seriously. He proudly reiterates, “I am learning to govern from the people of Ovacik.” He is known to keep his door open to all visitors — in fact, he has no door. The day that he took office, Macoglu removed the door, so that the people of Ovacik can come in as they please.

In a country where it has become common for bureaucrats to indulge in luxury vehicles, Macoglu refuses to use his official car. Instead, with the money he's saved, he has been providing free bus services for Ovacik residents. Although most are delighted with this service, not everyone has been comfortable with it. Several residents are concerned that the municipality will run out of money. Some insist on paying. A compromise has been reached by putting out a donation box: The service is free but riders may donate money if they wish.

Macoglu has also decreased the cost of water to a bare minimum for the town’s residents. He would have provided it free of charge if it were up to him, but by Turkish law water cannot be a free service. His first actions were to clean up the muddy streets and build a playground and park for children and teenagers.

A medical lab analyst by training, Macoglu had an impeccable reputation prior to becoming the mayor as a health professional who would volunteer to help the less fortunate on his own time, providing vaccinations and other medical services for free.

Ovacik is an interesting town to visit. The municipality provides free sign-language training services to help those with hearing disabilities. There are photos of the town’s hero, Ibrahim Kaypakkaya (the founder of the Turkish Communist Party) in several locations. There is also the famous Cuba Cafe, which displays images of Ernesto "Che" Guevara, plays Cuban music and serves foods inspired by Cuban cuisine.

When Al-Monitor had the opportunity to interview the mayor, no question was irrelevant or unimportant for him. He was polite, humorous and smart. His smile and genuine care for the people has charmed even his most bitter critics.

Macoglu is rather reluctant to dwell upon his creative initiatives. His adviser, Resat Kavak, explained to Al-Monitor that Macoglu has started a few local projects to raise funds and provide both income and food supplies for Ovacik. He first designated empty government lands, cleaned them up with locals and then started to grow chickpeas, beans and potatoes, all organic. The project proved successful. It should be noted that Macoglu has been involved in every stage of the process directly. He was there cleaning the fields, planting the seeds and during harvest and even packaging them. Kavak also explained that the municipality only receives a set amount of funds from Ankara, an amount that is not even sufficient to pay all the municipal staff's salaries. Therefore, two staff members' salaries are currently paid through independent donors’ contributions.

Al-Monitor:  Did Turkey get used to you as the “communist mayor?” How have the reactions been since March 2014?

Macoglu:  I think at first people were curious about what a communist looks like. We had what we call “political tourism,” people were coming into town to check out if we are monsters. [He smiled.]

I think most of the reception has been quite positive. Of course, we always remember we come from a tradition of heroes, heroes of the socialist and communist traditions. It was not even easy to be “left-wing” in politics, let alone be called a communist, but perceptions are changing with positive services provided to all people.

Al-Monitor:  What was the most important reason the people would vote for a communist mayor?

Macoglu:  What made the difference was not the person, but the socialist program. Our election platform was based upon serving the people, siding with the oppressed people, with production, with solidarity among people. We promised and established people’s councils, which have been effective.

Al-Monitor:  Which promises were you able to realize so far? We know you surpassed the expectations, while most were expecting you to fail. How did you maintain this level of achievement?

Macoglu:  We made three major promises: letting the people govern themselves, transparent and accountable municipality, increased production. According to our promises, the people can also recall the elected mayor if he fails to accomplish the promises. So far, we reached all our goals.

Al-Monitor:  Well, indeed you have not only reached your goals, but surpassed them. For example, Ovacik has reached out to the town of Hopa, which has suffered a major flood. Trucks filled with food and supplies carried relief to victims. Now, Ovacik is not a rich municipality. How could you manage to rally such aid? Also, it is said that the town of Roboski [Uludere] has approached you to repair their mosque. Given the widespread belief that communists are anti-religion, particularly against Islam in Turkey, why do you spend the money to repair a mosque?

Macoglu:  We do not view ourselves as rich or poor, but rather we try to maximize our resources to stand in solidarity with anyone facing a natural disaster or distress or discrimination. We do not view this as aid, either. We rather think of it as sharing. Concerning the mosque in Roboski, we see belief as a basic human right, just like transportation, education or health services. It is the basic right of the people whether to believe or not. Our individual belief system should not be the determinant of whom we help. We didn’t extend our help to repair the mosque on the orders of the government or a political party. We did it because the people of the town asked us. Communism, in essence, is not against the people’s beliefs.

Al-Monitor:  Also, we learned that Ovacik municipality has now provided scholarships to 78 students and provided hay for 11 families in town. How was such a small municipality that was in serious debt in 2011 able to accomplish this? Do you receive support from the government?

Macoglu:  We donated hay that was left over after the harvest to the families we know that are in need. It is a small town where we get to know all the farmers and how they are doing. Concerning the scholarships, we worked with a foundation to provide scholarships to the students. Some of these funds were donations from businessmen and academics. We also plan to include more students in the process of harvesting the locally grown produce in the coming years. This way, it is not just a scholarship but earned income in a way.

Al-Monitor:  There have been reports that due to social pressure, you will not be running for mayor in the next election. Is this true?

Macoglu:  This was a misunderstanding. I am working with the program Federation of Democratic Rights and struggling to apply it properly. The name of the person that will run next time is irrelevant as long as the program is applied. If I am seen as worthy to run, I will be happy to run again.