Turkey’s first and only communist mayor beat heavyweight rivals in the March 31 local elections, marking another milestone in his extraordinary political journey. 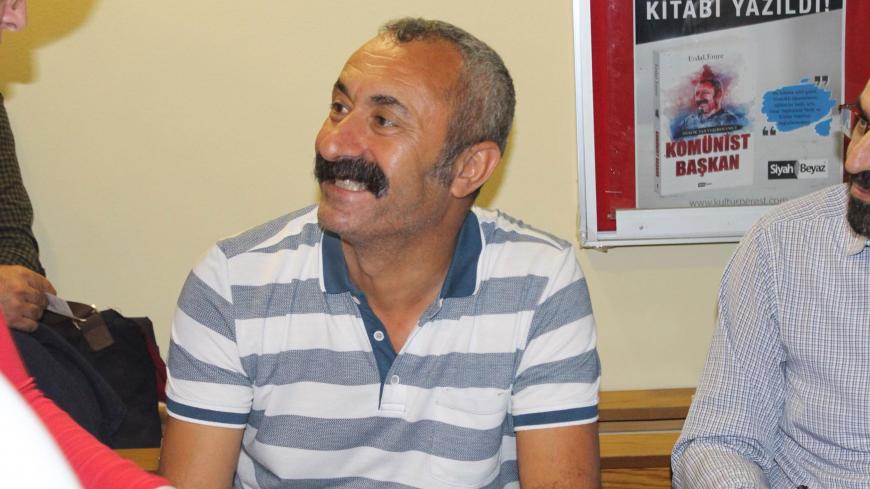 As the results of Turkey’s local elections emerged late on March 31, a meme featuring Vladimir Lenin went viral on social media. It showed the Russian revolutionary leader gazing at a computer, a cup of tea in his hand, saying, “We’ve taken Tunceli.”

It was a playful tribute to Turkey’s communists, a tiny but persevering community that won the mayoral race in the city of Tunceli, a left-wing bastion in eastern Turkey with a predominantly Alevi Kurdish population. Building on its debut in the nearby town of Ovacik five years ago, the Communist Party of Turkey (TKP) clinched the victory — its first in a provincial capital — with 32.77% of the vote, outstripping heavyweight rivals such as the pro-Kurdish Peoples’ Democratic Party (HDP) and the main opposition Republican People’s Party (CHP), which got 28.21% and 20.59% of the vote, respectively. The ruling Justice and Development Party (AKP) mustered only 14% of the vote.

The TKP owes its victory to Fatih Mehmet Macoglu, the outgoing mayor of Ovacik, a town of about 7,000 people, where his unconventional rule since 2014 has earned him nationwide acclaim. Boasting the title of Turkey’s first and only communist mayor, Macoglu now assumes the mayor’s office in Tunceli, the capital of the eponymous province of some 88,000 people.

Macoglu’s victory was front-page news, and even pro-government media commentators paid him tribute.

With the Lenin meme reprinted in his column, Hurriyet writer Ertugrul Ozkok praised Macoglu’s win as proof of how “people can succeed on their own against mammoth institutions” and “what people can achieve when they do the right things, work decently and speak the truth.”

Macoglu, for his part, hailed the outcome as “the victory of the Dersim people,” using the region’s Kurdish name. His first post-election gesture was to stray cats and dogs, a fixture of Turkey’s urban landscape and a focus of rising activism by animal lovers in recent years. “No flowers, gifts, etc., sent to the municipality will be accepted,” he tweeted. “Instead, you can make donations [to the municipality] to be used for the care, treatment and rehabilitation of stray animals.”

How did Macoglu win Tunceli for the TKP?

A native of the region, he was born in Ovacik in 1968. For many years, he worked as a health clerk and made a name for himself as a public-spirited figure in the community. Following his victory in Ovacik in the 2014 polls, he never cut his contact with the people. He even toiled alongside villagers in the fields. Transparency became a hallmark of his administration, with the municipality’s revenues and expenditures announced periodically to the public.

What made him a household name across Turkey, however, was the organic farm he started on 65 hectares (160 acres) of public land. Ovacik’s legumes and honey became so popular that the local cooperative began to open grocery stores — named Ovacikdogal — in Turkey’s biggest cities and even attracted buyers from overseas. Proceeds from the stores funded scholarships to support more than 200 needy students from the area. Macoglu also initiated a “popular assembly,” where all locals are able to participate and voice their views. He often made headlines in the national media, winning countrywide fame as “the communist mayor.”

When Macoglu announced he would run for Tunceli mayor earlier this year, many thought he was overplaying his hand and was doomed to lose, given the political might of both the HDP and the CHP in the region. He proved them wrong.

Arguably, the March 31 elections marked the rise of two new stars in Turkish politics: Macoglu in Tunceli and the CHP’s Ekrem Imamoglu in Istanbul, who narrowly beat the AKP contender but is still fighting to have his victory confirmed amid an avalanche of AKP recount requests.

Among those congratulating Macoglu were right-wing activists who once embraced the slogan “Communists, go to Moscow!” in the 1970s, when political rivalries often degenerated into bloody street violence. One of them, former state minister Gurcan Dagdas, tweeted, “He did not come with guns and cannons! He came with beans, honey and cheese! So, welcome. … My congratulations to the mayor who brought me from the point of chasing communists (when I was a student) to the point of applauding communists today.”

Macoglu’s move to Tunceli has led some to worry that Ovacik’s "communist grocery stores" might be shut down, with the CHP taking over the local administration in the town.

Macoglu, however, is confident that Ovacik’s natural produce will continue to grow and the markets will expand because the local cooperative “belongs to the people.” In remarks to Al-Monitor, he said, “The Ovacik groceries will go on. Their products are very important for the healthy nutrition of our people. We cultivate them only with seeds, soil, water and sun, using no chemicals. They are 100% natural, which is being certified via laboratory tests.”

According to the mayor, plans remain in place to open grocery stores in five new cities, in addition to those in Istanbul, Ankara, Izmir and Adana. “If the cooperative experiences difficulties, we will give it a hand,” he said. “More students will receive scholarships from the revenues obtained.”

On April 5, the day he received his certificate of election, Macoglu revealed that the Tunceli municipality — run by a government-appointed trustee since November 2016 as part of Ankara’s crackdown on Kurdish mayors — has accumulated a debt of 67.5 million Turkish liras (some $12 million).

Stressing that the municipality’s iron gate would be kept open from now on, he outlined his priorities. “In the short run, we will repay the municipality’s debt. We’ll be running a transparent, accountable administration,” he said. “We will establish popular assemblies within several months and run the municipality together with the people. Everybody will be able to participate and have a say.”

Asked how his achievements have changed the popular perception of communism in Turkey, a NATO member, where leftist movements were often demonized and suppressed during the Cold War, Macoglu slammed capitalism as a system where “a drop of oil is worth a drop of blood” and which has “ruined the people” and “gone belly up.” He added, “Our ideological standing, which prioritizes the basic needs of society and is based on participative governance, cooperativism and safe food production, has resonated with the hearts and the conscience of the people. That’s the secret of our success.”