Following intense pressure from Turkey and the United States over the war in Yemen and the killing of journalist Jamal Khashoggi, the Saudi king and crown prince are looking to rally support among their domestic base. 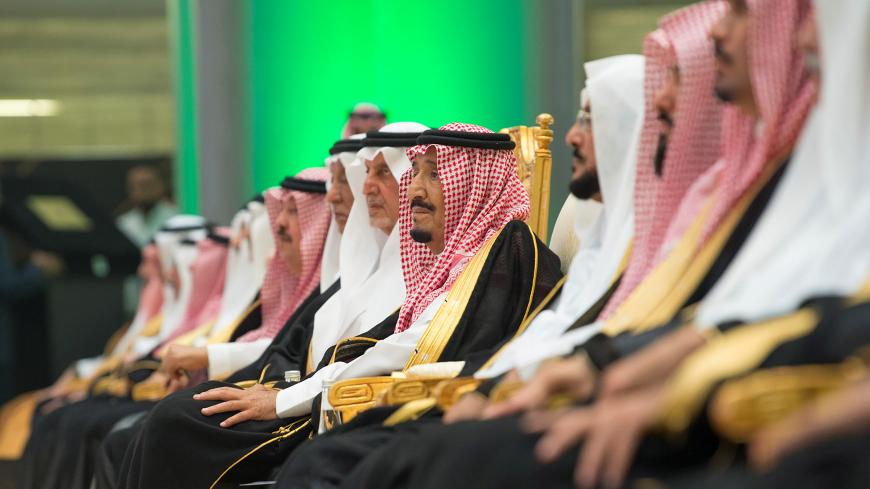 Under siege by Turkey, Saudi King Salman bin Abdul-Aziz Al Saud and his son Crown Prince Mohammed bin Salman are trying to ensure their base at home. An unprecedented royal tour, pardons and bonuses for workers are parts of a program to protect the embattled crown prince from the fallout from the Istanbul caper. The United States, especially when it comes to Congress, is a wild card in the still-evolving situation.

Turkish President Recep Tayyip Erdogan seems determined to pursue those responsible for the premeditated murder of Saudi journalist Jamal Khashoggi in the Saudi Consulate in Istanbul on Oct. 2. Erdogan has allowed a steady drip of leaks about the Saudi hit team that flew in to Istanbul to commit the murder and its gruesome actions. Occasionally Erdogan publicly discusses the case to confirm key pieces of evidence such as the existence of an audio recording of the murder. It’s hypocritical, of course, for Erdogan to be defending journalists, but he has other motives involving his ambitions to be the pre-eminent Muslim leader of his time.

Erdogan has consistently said he is confident the king is innocent, thereby implicitly suggesting that the crown prince is the mastermind of the murder. Does Erdogan have the evidence to prove it? The pro-government Turkish press reported last month that the leader of the hit team in the consulate made four calls to Riyadh during the day of the murder. The calls reportedly were to Bader al-Asakar, the crown prince’s chief of staff. If these calls happened, did Turkish authorities monitor them? Do they have tapes? Is this a smoking gun? Erdogan knows. He probably has other evidence, including forensics that are damning and revealing. The Turkish press is saying that it will soon publish more details about how the body was disposed of. Erdogan seems to be in no hurry to get the truth out; he is enjoying watching the Saudis squirm.

The Saudis also know the truth. Their flimsy cover story about a rogue operation simply is not credible. It is undermined by the very nature of the crown prince’s track record for reckless micromanagement.

The Saudis are in damage control. The king last week embarked on his first-ever tour of the kingdom to rally support behind the monarchy and his son. He began in Qassim province, the heartland of Wahhabi conservatives known as the Quran belt. He issued pardons for prisoners and payments to some of them as compensation. New projects were opened across the province worth $4 billion.

The Saudis also announced that public sector workers, including the military, will get bonuses in January. Salman extended extensive bonuses to public sector workers when he ascended to the throne in 2015 but has cut back on them since to cut government expenses in line with his son’s Saudi Vision 2030 program. The 2030 plan called for future bonuses to be tied to performance in an attempt to get away from handouts. But last week the palace said the bonuses would be distributed in the old way, untied to performance.

The king’s generosity is clearly designed to ensure that the kingdom is still behind its leadership. King Abdullah bin Abdul-Aziz Al Saudi did the same thing when the Arab Spring began in 2011, funding a massive spending bribe to keep the contagion of the Arab Spring from spreading to the kingdom. The choice of Qassim suggests that there may be special concerns about the conservative base of the monarchy.

The Saudis have been confident that the US administration is still in the crown prince’s pocket due to his close ties to Jared Kushner, President Donald Trump's son-in-law. The president still defends the Saudis but his administration has pushed for the kingdom to end the war in Yemen, the signature foreign policy initiative of the crown prince. The war is a catastrophe for the people of Yemen. It benefits Iran, which spends a pittance on the Houthis, while Saudi Arabia spends a fortune backing a collection of warring parties.

Under intense pressure from Congress, the Pentagon last week halted air-to-air refueling for Saudi and coalition airstrikes. It’s a mostly symbolic move but it is the first tangible American break from the war in two administrations. On Nov. 11, Secretary of State Mike Pompeo phoned the crown prince and called for a cessation of hostilities.

Congress is likely to press for more action to bring Khashoggi’s case to closure and the end of the Saudi war in Yemen. The Israelis are urging its supporters not to go after the crown prince, a stance that does not help him in Qassim. It’s a fluid game in which the revelation of potentially incriminating new evidence will play the crucial role.

A century ago the Saudis played a modest role in ousting the Ottoman Empire from the Arab world. It’s very ironic that a hundred years later a Turkish president who openly admires the Ottomans may have the destiny of a Saudi prince in his hands.