Can Israeli Druze bring about cancellation of Nationality Law?

Spurred by Defense Minister Avigdor Liberman’s resignation and the realization that elections will likely be moved to early 2019, the leaders of the Druze community are determined to fight against the Nationality Law. 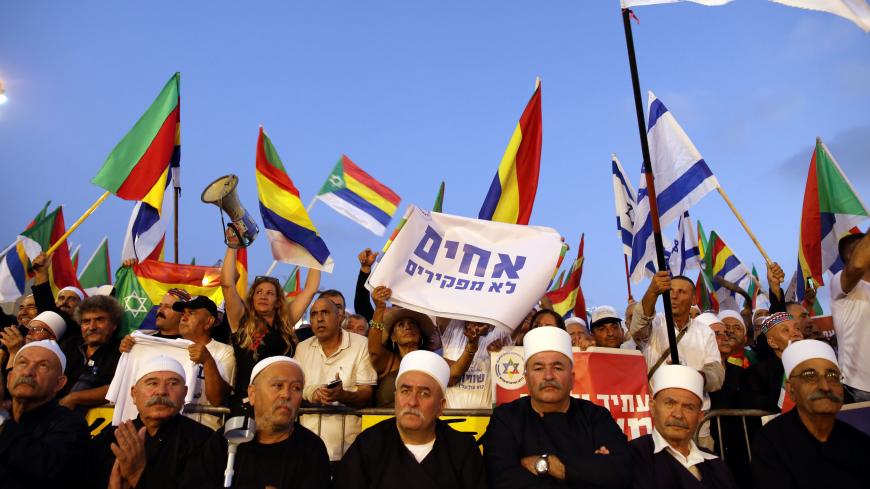 Leaders from the Druze minority and others take part in a rally to protest the Jewish nation-state law in Rabin Square in Tel Aviv, Israel, Aug. 4, 2018 - REUTERS/ Corinna Kern

It certainly seems like Israel is headed toward early elections. Defense Minister Avigdor Liberman, who resigned Nov. 14, and Education Minister Naftali Bennett were both part of the current right-wing government of Benjamin Netanyahu, competing over which of them was its most right-wing member. And so, whether or not the current government will be dissolved in the coming months, it would leave a series of controversial laws and initiatives in its wake. What all these laws and initiatives have in common is that they attempt to bolster Israel’s identity as a Jewish state and, ultimately, demand total loyalty from its citizens. Under these circumstances, Judaism and loyalty became the criteria to be eligible for the equal rights of citizenship.

These elections, which will likely take place between March and May 2019, may be the last chance for the Druze community to repeal the odious Nationality Law, which, by its very nature, defines them as second-class citizens. If they fail in this attempt, the law will tarnish the country’s image for all time. That is why, just a few hours after Defense Minister Liberman resigned, Brig. Gen. Amal Assad (res.), a member of the Druze community, told Al-Monitor with complete confidence that “the Nationality Law will be repealed.”

Assad fought in the Battle of the Chinese Farm in Sinai during the Yom Kippur War in 1973. It was one of the bloodiest battles ever fought by the Israel Defense Forces (IDF). He went on to command Battalion 932 of the Nahal Corps, and was head of the Coordination and Liaison Administration with the Palestinians. After the Nationality Law was passed on July 19, he became a leader of the Druze demonstration in Rabin Square in Tel Aviv, using Facebook to denounce Israel as an “apartheid state.” At a meeting planned to reconcile the prime minister with the Druze community on Aug. 2, Netanyahu stormed out simply because Assad was one of the notables in attendance. Assad’s military past, his heroism and his loyalty to the state failed to score him any points with Netanyahu.

Since then, Assad has taken it upon himself to convince Israel’s Jewish citizens that the Nationality Law does not just affect the Druze and other minorities. He insists that it is incumbent upon the Jewish citizens of Israel to stand shoulder to shoulder with the country’s minorities in pressuring Israel’s decision-makers so that “this blotch left by the Netanyahu government be removed.” As he puts it, “We will not allow this issue to come off the agenda in the upcoming elections.”

At this stage, Assad refuses to go into detail as to what steps the Druze are planning to take to force the members of the next coalition to repeal the discriminatory law. Nevertheless, he shows great confidence in saying that the parties will be subject to so much pressure when the next coalition is formed that one of the first acts the new government will be forced to take is repealing the Nationality Law.

The Druze community in Israel numbers 140,000 people. “They are barely worth two seats in the Knesset, which means that they have very little strength electorally,” said Assad. He knows that boycotting the election would have no real impact on the various parties, but “we will make sure that the people of Israel will be on our side when we demand that the law be amended, and that will happen even before the election. The law will be repealed. I promise you that.”

Assad is not a politician, nor does he hold any official leadership position among the Druze community. Nevertheless, he is empowered by his public advocacy on behalf of IDF troops in general and Druze soldiers in particular. The younger members of his community consider him a role model, worthy of admiration and emulation.

There has been a rise in the number of Druze enlisting in the IDF over the last few years. While this can be attributed to the social mobility that military service ensures minorities, the idea of serving their country like all other citizens is also an essential value that younger Druze absorb in the home. They are taught that serving is the right thing to do, and fathers and sons alike take pride in their positions, ranks and commendations. In fact, some Druze communities in the north look more like military bases than villages.

He said the IDF considers members of the Druze and Circassian communities to be highly motivated soldiers, who consider their enlistment in the IDF as a major impetus for social mobility and integration into Israeli society. As such, they begin preparing for service as early as high school. Once a year, soldiers and officers from the various units visit the community’s schools to talk to the students about what they do and expose them to the various units. “This helps students understand the differences between the Givati, Golani and paratrooper brigades, and lets them know what to expect,” he said. According to recent IDF data, Druze soldiers can be found all across the IDF, from front-line units like Golani to intelligence units employing advanced technologies, like Unit 8200.

“We are equal when we are in uniform, but once we put on civilian clothing, we face discrimination,” the spiritual leader of the Druze community, Sheikh Mowafaq Tarif, said Oct. 24 at a Jewish Agency conference. The “covenant of blood” that his father, Sheikh Amin Tarif, forged with Israel back in 1956 has been a sign of honor in the community’s complicated relationship with “the nation state of the Jewish people.”

Even though this covenant has been violated unilaterally, not a single leader of the community, including its most stubborn and most militant spokesmen — like Amal Assad — would never even consider issuing a call to refuse to serve as part of their efforts to overturn the law. On the contrary, they prefer pointing to the rise in the number of new recruits every year and to use that as leverage against the discriminatory law.

The Druze leadership made a strategic decision, which gained momentum once they realized that elections were right around the corner. They would launch a different kind of struggle and cause politicians from all parties who voted in support of the Nationality Law to feel ashamed of what they did. They believe that this sense of shame would cause them and the leaders of their parties to introduce a clause calling for the repeal of the law into their parties’ platforms and use it as part of their election campaigns.

Having two or even three seats in the Knesset is not enough to really apply political pressure. As such, the Druze plan to win as much support as they can from Jewish citizens who were ashamed by the very passing of a law, which grants unequal status to other loyal citizens, solely on the basis of their ethnicity. What the Druze really hope is that the strength of their two seats will multiply into an electoral force that is much stronger than its disparate parts.