The Israeli Druze community feels that the Nationality Law turns them into second-class citizens, ignoring their loyalty and contribution to the state. 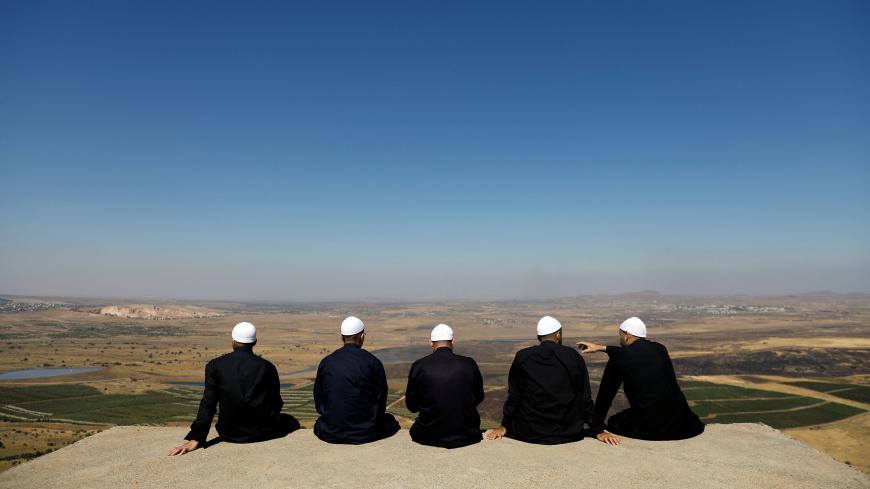 Israeli Druze sit together watching the Syrian side of the Israel-Syria border in the Israeli-controlled Golan Heights, Israel, July 7, 2018. - REUTERS/Ronen Zvulun

In the week when hundreds of people from the Druze community were massacred in Syria by Islamic State terrorists on July 25, their Israeli peers are struggling for their status in the state following the passage of the Nationality Law. According to the Druze, the Nationality Law, anchoring the Jewish character of the state, hurts them. And they feel particularly hurt because many members of the community are loyal citizens who serve in the army.

The Nationality Law that passed in the Knesset July 19 is a basic law. It has greater legal standing than a regular law, as Israel has no constitution, and it enshrines the State of Israel as the nation-state of the Jewish people. The legislation was intended, among other things, to act as a counterweight to the basic law of Human Dignity and Liberty, which is the main basis for the defense of the rights of citizens, including minorities.

"Israel is the best country in the world for the Druze. It's best to be Druze here, but the Nationality Law turns us into second-class citizens. However, I love the country as a Jewish and democratic state, and despite the law, I'll continue to be a loyal citizen," former member of Knesset Shachiv Shnaan (Labor) told Al-Monitor. Shnaan lost his son, border policeman Sgt. Maj. Kamil Shnaan, in a terrorist attack at the Temple Mount in July 2017.

When the Nationality Law was being written, Druze representatives were angry at the discrimination it would create against them. In September 2017, Shnaan participated in a debate of a special Knesset committee that formulated the law and called on members of the Knesset to “not accept the Nationality Law without including the word 'equality' in it."

The Druze are a religious group that separated from Shiite Islam in the 11th century and has kept its distinction since. They are spread throughout several countries, including Syria, Lebanon and Israel, and their political-diplomatic behavior is based on a principle of loyalty to the state in which they live. This principle has forged their alliance with the State of Israel. In 1957, the Druze in Israel were officially recognized as a religious community, and at the same time, their military service in the Israel Defense Forces (IDF) became mandatory by law. The rate of enlistment among the Druze is very high. According to IDF data, about 80% of Druze youth of enlistment age join the military, compared with 72% of all Jewish men, and only 20% amid ultra-Orthodox men. More than 400 Druze have been killed along the years during their military service, and this is the source of the oft-repeated phrase "blood covenant" between the Druze and the Jews. This covenant is the basis of the Druze’s great frustration at the legislation of the Nationality Law.

Druze spiritual leader Sheikh Muafik Tarif said in an interview on July 26, "We [the Druze] give the State of Israel everything, we show the whole world that whoever goes with the Jewish people gets equality. Sadly, this is not happening right now."

Brig. Gen. (Res.) Amel Asad has been working to change the law along with about 100 Druze officers in the reserves. "I built my home here many years before the founding of the state and fought shoulder to shoulder with you," he told Al-Monitor. "I support only Jewish rule in Israel, but on the other hand, the Nationality Law defines you [the Jews] and leaves us out of the equation." As he sees it, the main problem is the lack of a clause that establishes equal rights for all citizens of the state, including the Druze. Asad warned that the law could have ramifications on the motivation for enlistment on the part of young Druze.

On July 22, Druze leaders, headed by Knesset member Akram Hasoon (Kulanu), petitioned the High Court against the law. In the course of the week, Druze members of the Knesset, incluing Salah Saad (Zionist Camp) and Hamad Amar (Yisrael Beitenu), joined the petition. Hasoon and Amar voted against the law in the Knesset plenum, despite each being members of the coalition, as they received license to vote their conscience. Minister Ayoob Kara, who is also Druze, actually supports the law. Kara said he's proud to be Israeli and happy that Israel is the nation-state of the Jewish people. In a press release he explained that "thanks to the Jews, we have freedom of worship here, equal opportunity and a flourishing and prosperous state. The minority has rights, how lucky that this is not Syria or Iran."

Following growing protest from the Druze, coalition leaders have started to understand that there's a problem with the Nationality Law. Finance Minister Moshe Kahlon said that the law was legislated hastily and that he is attempting to change it. Kahlon even backed fellow party member Hasoon in his petition to the High Court. Education Minister Naftali Bennett (HaBayit HaYehudi) tweeted that he understood that the law hurts the Druze and clarified: "As the government of Israel, we have the responsibility of finding a way to heal this rift."

Knesset member Benny Begin of the liberal faction of the Likud said he would present a suggestion to amend the law to include a clause that would guarantee equality for all citizens.

Talking to Al-Monitor, journalist Yoaz Hendel, the chairman of the Institute for Zionist Strategies, a conservative research institute, said that the Nationality Law is a step toward a constitution "and the waves it has set off stem from this fact and show the great difficulty in forging a constitution in a country with different streams of Judaism as well as non-Jewish minorities."

One of the leaders of the Druze protest told Al-Monitor on condition of anonymity that "one could perhaps understand the emphasis on nationality in the law, but the fact that the Druze are partners in defending Jewish nationality in contrast to Arab citizens who don't do so should have been mentioned." The paradox is that the Druze struggle for equality of all citizens in the Nationality Law is actually in the name of all non-Jews in Israel, including Muslim and Christian Arabs. The emphasis on military service helps the Druze gain support from the Jewish public, also from the right-wing side of the political map, and that's the reason they have a chance to change the law or pass another law that would guarantee equal rights for all citizens, even if they are not Jews or do not serve in the military.

Prime Minister Benjamin Netanyahu seeks to isolate the Druze from other minorities on the basis of the principle of rights in exchange for service. On July 26, Netanyahu met with Hasoon and Amar and clarified that he would not change the law, but he promised to act to prepare a comprehensive plan that would "reflect the deep commitment of the State of Israel to the Druze community," according to the announcement following the meeting. Netanyahu is also slated to meet with other leaders of the community and representatives of Druze military officers. A senior member of his staff stressed that there is no intention of changing the law, which is not connected, according to him, to the rights of minorities but to the national status of the Jewish state. The Druze, on their part, do not intend to give in "until this wrong is righted."