The Druze community in Israel has condemned the Jewish Nationality Law, which effectively demotes them to second-class citizens despite their military and other service to Israel. 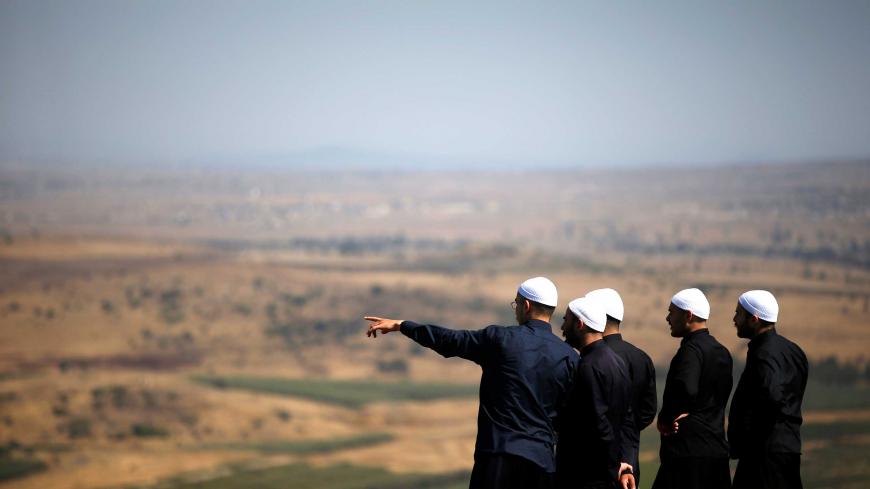 Israel's Nationality Law has elicited an angry reaction from the country's small Druze community, which feels betrayed. The law officially declares Israel the nation-state of the Jewish people and makes Hebrew the sole official language, downgrading Arabic, which had previously also been recognized as an official language. In short, it relegates non-Jews, including the Druze — who serve in the Israeli military and have paid the ultimate price in Israel’s military conflicts and occupation — to being second-class citizens.

Yusri Khaizaran, a lecturer in modern Middle East history at the Hebrew University of Jerusalem, noted the deep roots of the Druze in the Galilee, in northern Israel/Palestine. “The Druze have been here from more than 1,000 years, and they are an integral part of the cultural community in the Galilee,” he told Al-Monitor. According to the law, the right to self-determination for the Jews applies to the “Land of Israel,” whose borders are undefined.

Khaizaran said that the law isolates the Druze community in the place where they have always lived. He further remarked that army officers are announcing that they will be ending their service in the Israel Defense Forces. Shady Zeidan, a high-ranking officer in the army, has already quit, resigning July 30. Khaizaran told Al-Monitor that Riyad Ali, a reporter with Makan Radio, had commented that the new law essentially makes Druze soldiers mere “mercenaries,” serving for pay, not necessarily patriotism.

While the remarks by the Palestinian professor, who is a Druze citizen of Israel, reflects the anger of his community, his personal opposition to the law lies primarily in its culturally discriminatory clauses.

“We know Israel is a Jewish state, regardless of whether it legislates this issue or not,” Khaizaran said. “But my serious concern is in the effort to demote the [Arabic] language, spoken by 20% of the population of Israel. Our Arabic language has been spoken on this land for thousands of years and was declared an official language by the British mandate after World War I. Demoting Arabic from an official language to having ‘a special place’ gives a green light to stop support for Arabic in all formats.”

Another Israeli officer, Capt. Amir Jmall, said in an open letter to Prime Minister Benjamin Netanyahu dated July 29 that he will “stop serving” in the military to protest the controversial nation-state law. That same day, three Druze Knesset members petitioned the Israeli High Court of Justice, calling the new law an “extreme” act that discriminated against the country’s minorities. Israeli media reported that all three members — Hamad Amar of the right-wing Yisrael Beitenu, Akram Hasoon of the centrist Kulanu and Salah Saad of the left-wing Labor Party — served in the security forces and have been involved in Zionist organizations.

Senior Israeli officials have tried to limit the law's fallout on their fellow “blood brothers.” “The enactment of the nation-state law was done hastily,” Finance Minister Moshe Kahlon said. “We were wrong, and we need to fix it.”

Druze community leaders also met with Israeli President Reuven Rivlin July 29. Rafik Halabi, the head of the Daliyat al-Karmel regional council, spoke after the meeting of the blatant discrimination that exists in Israel.

Yedioth Ahronoth reported Halabi as saying, “We expressed our concerns regarding the law, which we see as discriminatory, that does not acknowledge our citizenship, our sense of belonging and we clearly said that we want equality for everyone. We will not be able to continue to live in a country where a large part of the population — who is loyal to this country, feels excluded.”

Attempts by Netanyahu and top Israeli officials to limit the damage through meetings and possible offers of appeasement have failed to produce a change in opinion among the Druze, according to Yedioth Ahronoth. “Netanyahu is once again lying to the public,” the Knesset's Saad was quoted as saying. “This is his how he operates — he supports the protest in order to bury it. I stopped believing the Prime Minister's Office's political spin. I will continue to protest against the Nationality Law with all my might, alongside bereaved families and the entire Druze community.”

While mainstream pro-government Druze officials have expressed anger about the law, a number of opposition Druze figures and activists feel differently. Marzouk Halabi, a political science professor at the University of Haifa who refused to serve in the Israeli military, told Al-Monitor that he and others feel vindicated.

Halabi remarked, “Those who refused to serve, like me, say this was expected. Now it has become a law, it is good that our fellow people who have put all their trust in the Israeli government get this slap in their face to wake them up.” He believes that Israel is today at its strongest ever, and this has made members of the society arrogant and its leaders drunk with power.

“Israel has a strategic advantage and is in the best situation it has ever been in since its creation,” Halabi said. “Israeli leaders are living in the clouds. They want to erase the Green Line. They don’t demarcate the Green Line when they say that Jews have a right to all the lands of Israel and the question is what they’ll do with the Palestinians.”

While opposition to the law is unanimous among the 150,000-strong Druze citizens, there is no clear path as to what they can do about it or what they will accept in any possible compromise.

“The Druze community has few options,” Halabi said. “They need to join the liberal activists in Israel, whether in the Jewish community or in the Palestinian Arab community.”

One demand that most Druze observers don’t expect to be granted is the elimination of mandatory military conscription. Adnan Tarabshi, a respected Druze actor, told Al-Monitor that he and others are planning to participate in a demonstration in Rabin Square, in Tel Aviv, on Aug. 4.

“I and others like me who refused to serve in the army since the 1970s are not surprised by this law,” Tarabshi said. “We are Palestinians, and we call for the boycott of elections in the Israeli Knesset that passed this discriminatory law.”